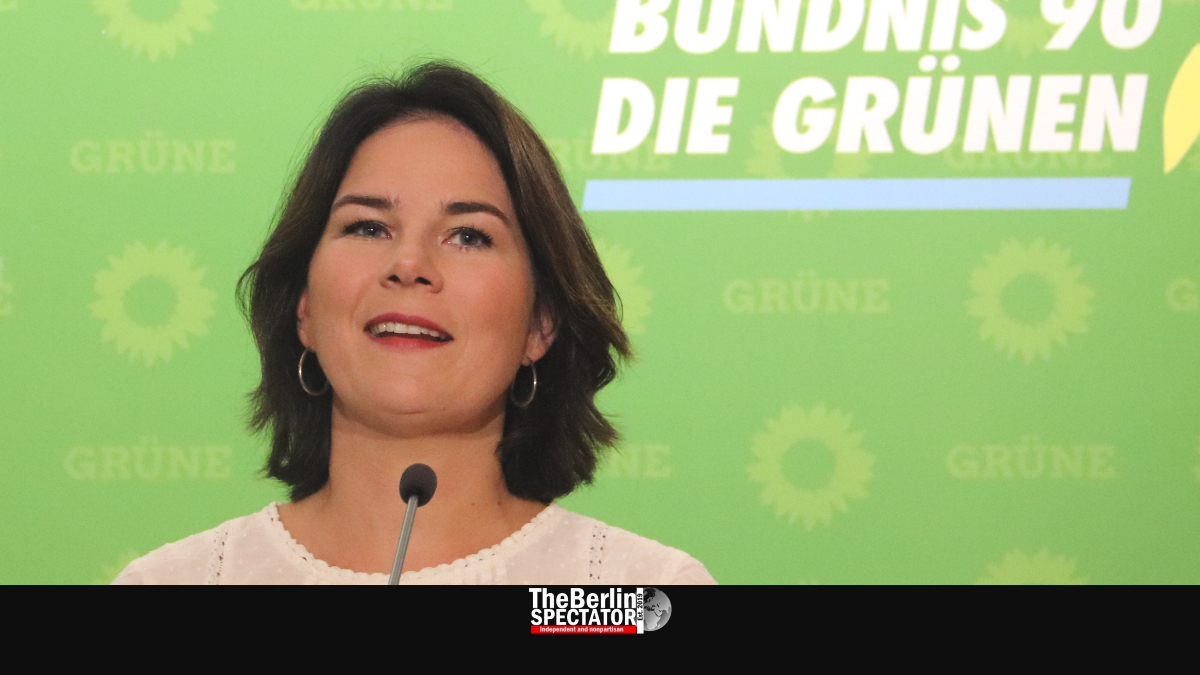 At their ongoing party convention, the German Greens showed the country they are ready to take over the governments of two city states. They might even succeed in becoming part of the federal government soon.

At the big event in Bielefeld, the party which rose up from the ecology and peace movements once upon a time fought a war in its own ranks. Their member Joschka Fischer, who had become Foreign Minister a year earlier, wanted the Bundeswehr, the German armed forced, to take part in a military mission in Kosovo. His plan did not go down well within the ‘fundamentalist’ fraction of the Greens.

Fischer got hit by a paint bomb which injured his eardrum, while someone poured a bucked of curry sauce over chairlady Claudia Roth’s head. She has looked better than at that moment. The convention was a disaster. Back then, the Greens were not nearly as strong as they are today. Also the country was a different one in 1999.

Now the German Greens returned to Bielefeld to reelect their leadership, to celebrate themselves and to show everyone they are ready to govern. There are several opportunities:

A Lot of Water

But, as they say in Hamburg, a lot of water will flow down the Elbe river until 2021. On the other hand, the takeover of the northern marvel’s city hall might only be 100 days away. In Hamburg, the Greens have a weapon by the name of Katharina Fegebank. The 42-year-old wants to become First Mayor and might very well reach that goal.

For eight years, until 2015, Katharina Fegebank headed the Hamburg state association of her party. Afterwards, she became Deputy Mayor and Senator of Science, Research and Equality, which she still is today. Since the Social Democrats (SPD) are ailing even in one of their last strongholds, she might actually win.

Katharina Fegebank is a bright lady who does not need notes when she holds speeches or answers interview questions. She brings her message across in a confident way without ever floundering, as if she had learned an entire book on any matter by heart. And she is cheerful all the time.

In her Bielefeld speech, she stressed how important cheerfulness was in politics, apart from determination. Persuasiveness is yet another trait which makes her a convincing candidate. Apart from the regular Green voters in Hamburg, Katharina Fegebank will likely appeal to women and other undecided Hamburgers.

The distance from Hamburg’s city hall to Red City Hall in Berlin is exactly 298 kilometers (185) miles. At this stage, the German capital, which is another city state, is being ruled by a three-way left-wing coalition headed by Governing Mayor Michael Müller’s SPD. The Greens and ‘The Left’ are junior partners. The way things stand, this ‘red-red-Green’ coalition might turn into a ‘Green-red-red’ one in 2021.

What the general elections in 2021 are concerned, the Greens have a big potential too. According to the polls, they are the second-strongest party in Germany now, trailing behind Chancellor Angela Merkel’s conservative CDU. If elections for the Berlin Bundestag took place right now, the Greens would get more than 20 percent. In spring, they were even stronger than the CDU, in one poll.

The Greens’ strength leads to the big question: Who will be their candidate for Chancellor? Will it be Annalena Baerbock (read separate article Annalena Baerbock: Germany’s First Green Chancellor?) or is her colleague Robert Habeck the right person? The two party leaders just got reelected in Bielefeld, meaning they will lead the Greens into the general elections in two years from now.

While Robert Habeck got a very good result of 90,4 percent, Annalena Baerbock broke all records with 97,1 percent. Does this lead over her male colleague make her the candidate automatically? No. Both her and Habeck have proved they can lead, they are team players, they both have a passion for politics, for ecology and for Europe.

Both know how to express themselves. Both can come a across a little emotional at times. Both have understood that wanting to govern means the ability to reach compromises is existential, even with conservatives. Both know that saving the German democracy is one of the main tasks today and that climate protection policies alone will not suffice to get them where they want to be.

They also know they need to convince the average German that they are not the party of prohibitions. Contrary to the accusations in conservative circles and media, the Greens say they do not want to tell Germans they can not eat meat or drive their own cars anymore. But they do stand for a “social-ecologic” transformation of Germany.

In Bielefeld, the two new and old party leaders held convincing speeches. Annalena Baerbock told the hundreds of delegates, three things were needed, namely “the team” which consisted of the Greens’ 94,000 members, good partnerships and action.

“We need to create partnerships with people who do not think the same way. That way we will be able to act”, she said. “Robert and I know that agreeing to compromise is not easy”, but, in order to reach their goals, this was exactly what the Greens needed to do. Annalena Baerbock said changes looked good in Excel tables. This was about making them in reality though.

Time to Go Ahead

Germany needed an economy without coal, oil and gas, she told her party colleagues. “Forty years ago we said we had borrowed the Earth from our kids. Now it is time to return it to them.” For this statement, she got even more standing ovations than before. “We need a climate-neutral society.”

Baerbock also mentioned an idea which showed she might indeed be thinking of the Chancellery, one she knew would not be too popular in her party. She said a European army might be useful. “But military operations should never have a self-purpose.”

Robert Habeck blasted the federal government’s “destruction of wind energy” and its “stalling of the coal phase-out“. In his speech he stressed the Greens were a political force with the task of shaping things. That is what the Greens had been founded for. Now it was time to go ahead.

Habeck prepared his party friends for rough seas by saying the next two years would be tough. He stated he expected heavy verbal attacks. “We need to remain open for justified criticism while renewing our offers for talks and exchange all the time”, he told the delegates.

One of the party’s biggest stars, Winfried Kretschmann, who heads the government of Baden-Wuerttemberg, is the only Green governor (‘Ministerpräsident’) in Germany. For now. He said he felt “a little lonely” at the regular Chief Minister conventions and was looking forward to meeting Katharina Fegebank there. It might happen soon.