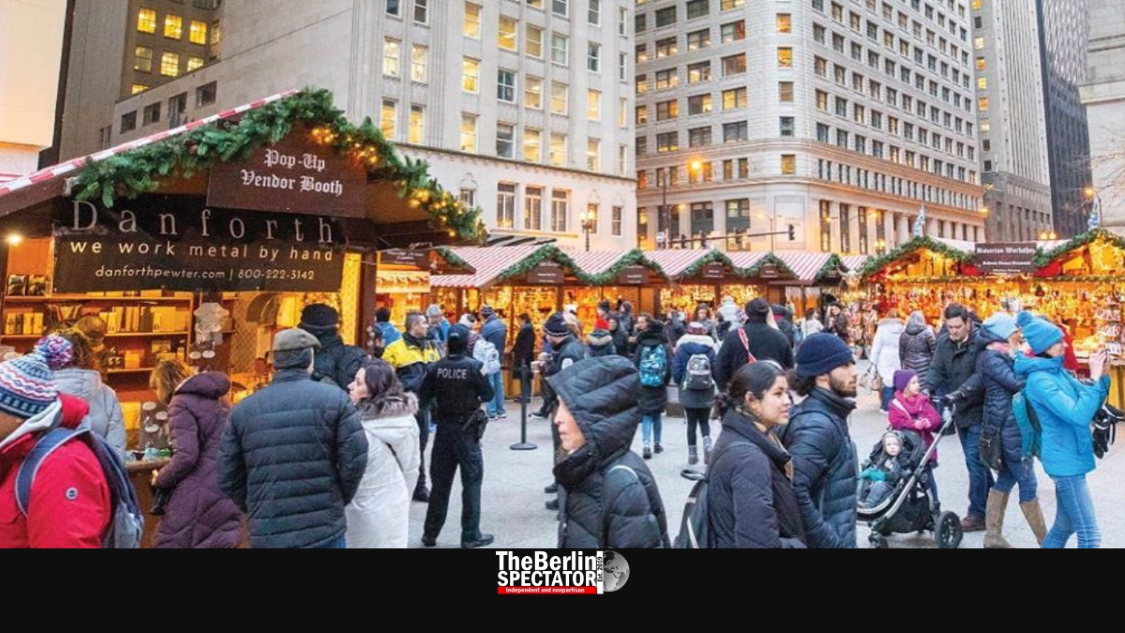 The German Christmas market tradition has become very popular in the United States of America. In Chicago, Cincinnati, New York City and elsewhere, residents can’t get enough of it.

In the year 1628, Nuremberg’s ‘Christkindlesmarkt’, the most famous Christmas market of them all, was mentioned in documents for the first time. Almost 400 years later, it still exists. All over Germany, those markets offer everything German Christians want for Christmas, including the right atmosphere and mood.

In the late 1990s, the tradition hit America with some delay. German Christmas markets have spread all over the U.S. by now. One of the biggest ones is Chicago’s annual ‘Christkindlmarket’. Established in 1996, it keeps on growing. Now it has two locations.

In the city center, between Randolph Street, Dearborn Street, Washington Street and Clark Street, the Chicago version of this market has 27 stalls offering gifts and ornaments. Food and drinks are being sold at 21 stalls and in two big tents. The Americans have not forgotten the most important items either: Four ATMs were installed on the market.

At Wrigley Field, just a few blocks from Lake Michigan, the second market offers pretty much the same. Some vendors are probably German expatriates. ‘Bienes Honighaus’ offers honey, the ‘Baked Cheese Haus’, ‘Sweet Swabian’ and the ‘Schnitzel Haus’ are probably more German than those hundreds of vendor stalls in Nuremberg. In Chicago, they also have ‘DönerMen’ for those who would rather consume good non-German food.

While visitors of Christmas markets in the country of their origin have no issue pouring ‘Glühwein’, that hot wine punch, down their throats in front of everyone, things are more tricky in the U.S., where the drinking needs to be hidden in tents because stricter laws apply.

One of the most popular items they sell on those markets are what the Americans call ‘steins’. In German, ‘Stein’ stands for stone. Across the Atlantic Ocean, ‘steins’ are gaudy German beer pitchers with pictures of the Black Forest, cuckoo clocks or traditional Bavarian houses.

‘Winter Village’ in New York City seems to be more of an international Christmas market, but it does offer Swiss Raclette, the best cheese ever, and other European treats, a real Santa Claus and a super-sized Christmas tree.

Christmas Markets in the Far East

These markets are all over the place, including in Nashville (Tennessee), Atlanta (Georgia), Arlington (Texas) and Indianapolis (Indiana), where they even explain German Christmas traditions at length. In San Francisco, they converted the German theme to a more English one by calling it ‘The Great Dickens Christmas Fair’.

A non-profit group in Cincinnati (Ohio) established the ‘Cincideutsch Christkindlmarkt’ in 2012. The members might have had a little too much ‘Glühwein’ when they decided to adopt that name. They introduce the market in both English and rather rusty German on their website. More German events, including several ‘beer fests’, are being run up there in Ohio as well.

German Christmas markets can be found at even more exotic places, including Shanghai, where they have three of them, in Osaka and in Delhi. And they are all over Europe, including in Sofia (Bulgaria), Madrid and other parts of the continent. Cheers.

Germany: One in Three Women Affected by Violence