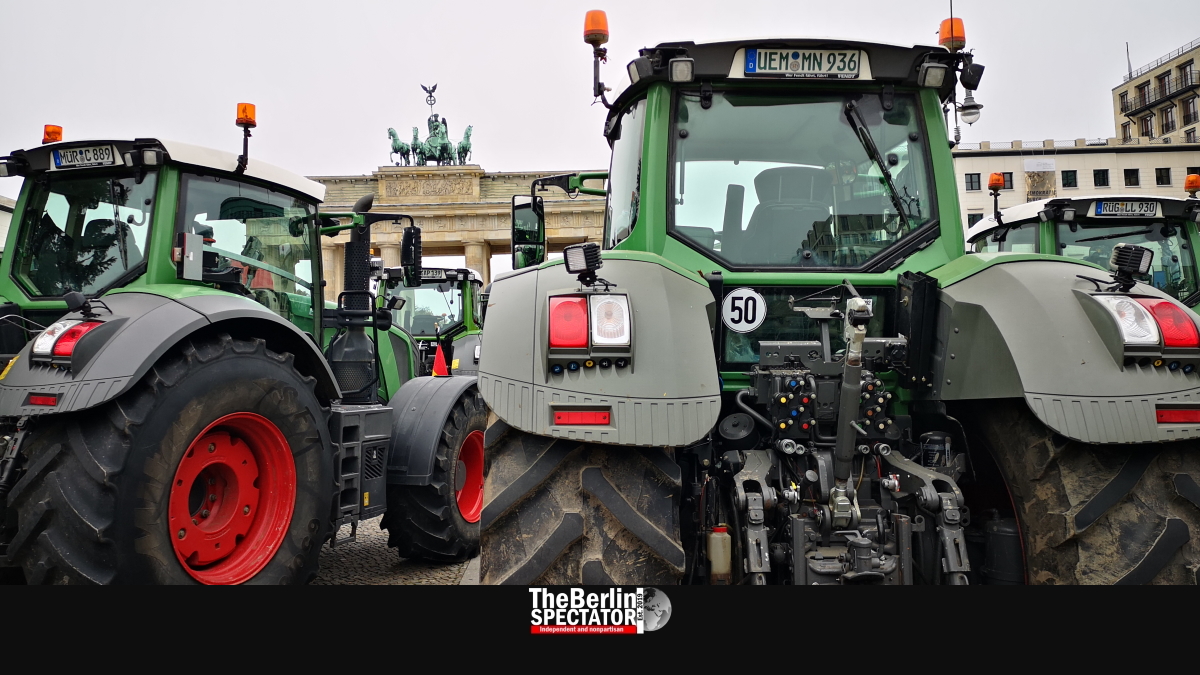 Thousands of farmers from all parts of Germany staged a protest in Berlin on Tuesday. They got a lot of attention, also because they pretty much shut down the city with 8000 tractors.

When the farmers from all over the country took part in their main rally at Brandenburg Gate today, they had already blocked traffic on several main arteries in Berlin. With their tractors, they went right into the German capital’s city center. Some agriculturalists had left their farms on Sunday to be in Berlin on time.

A few farmers from Thuringia spent their time drinking beer and eating sausages between all the tractors parked in front of the Gate. But most of them listened to what their colleagues had to say. A lady from Swabia tried to speak high German, without success, when she told the federal government to listen to the farmers more.

She said it was a scandal that politicians decided how farmers had to cultivate their fields or take care of their animals. Far more respect was necessary, she said at Brandenburg Gate. A colleague of hers blasted the ban on glyphosate which Berlin had decided on without providing an alternative. By 2024, nobody is supposed to use it anymore.

Countless signs fixed to all the tractors said “Food should not be cheap”, “Whoever bothers farmers will be voted out of office”, “There is a shortage of skilled labor in the government” or “No farmers, no food”. Another aspect they reject is the insects protection program Agriculture Minister Julia Klöckner came up with.

Many farmers feel they are being made responsible for issues such as the decline in insects, even though they had nothing to do with them. “Aviation and mobile connections ill the insects”, a big sign on a huge tractor read. The latest fertilizer regulations are yet another aspect many farmers are unhappy about. “Everybody talks about us, but nobody talks to us.” This is what many farmers say.

There are about 300,000 farms in Germany. Some 90 percent of all farmers are officially being represented by the German Farmers’ Association. But since many do not feel their interests are really being discussed in Berlin, around 100,000 farmers became part of a giant Facebook group via which they organize their protests. Eleven days ago, they were in Hamburg. Today it is Berlin.

One of the demands many farmers have is reimbursement because of regulations. If the latter lead to even more work of if they decrease their yield, the farmers want the state to pay them.

Minister Klöckner was going to talk to the farmers in the afternoon, before they leave Berlin in the evening. Once those 8000 tractors use the city’s arterial streets and highways again on their way home, traffic will collapse for the second time today. The authorities asked Berliners to use ‘U-Bahn’ and ‘S-Bahn’ trains because buses and tramps were blocked too.

So far, CDU and CSU, two conservative sister parties, had been seen as the right party by farmers. But according to many of them, the trust has been broken, at least in part. It seems a few concessions might calm the farmers down. Whether Minister Klöckner is ready to give farmers part of what they want remains to be seen.