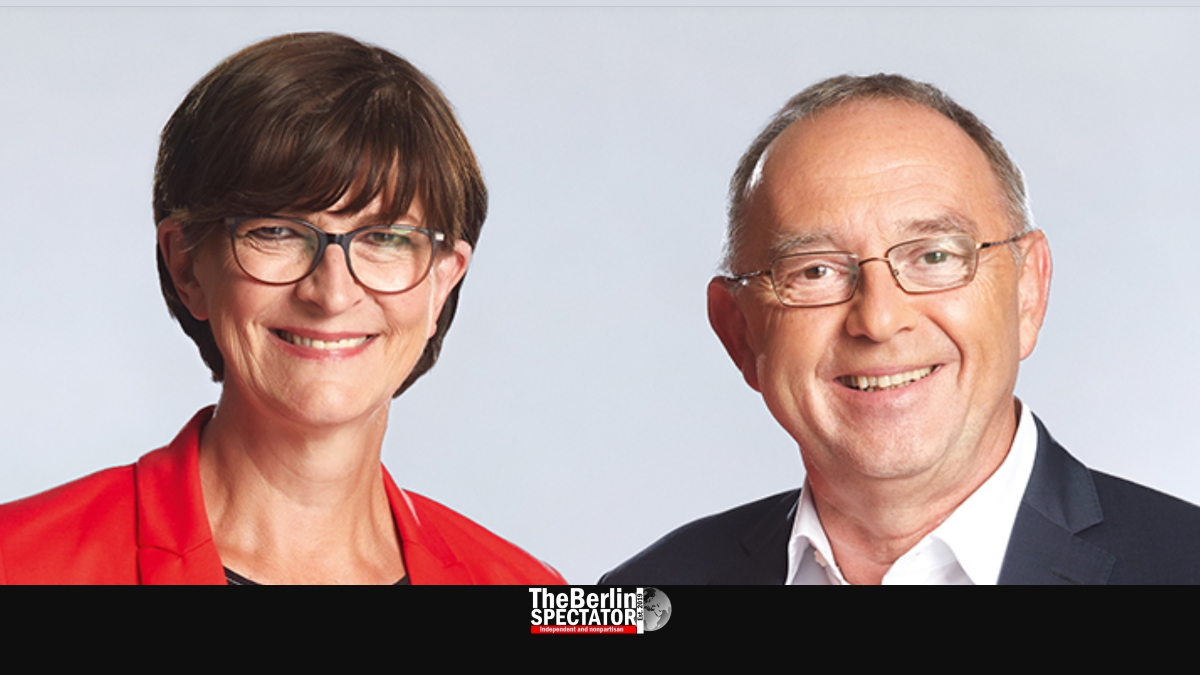 In a member survey, Saskia Esken and Norbert Walter-Borjans, two candidates hardly anyone knows, just became the new leaders of the Social Democratic Party (SPD) in Germany. This may have implications for Chancellor Angela Merkel’s government coalition. Will it survive?

Saskia Esken and Norbert Walter-Borjans are the underdogs who won. Their victory in the SPD’s member survey was a surprise. By choosing them, a majority of German Social Democrats made a statement against the party’s establishment and against Vice Chancellor Olaf Scholz, who lost by a narrow margin.

Move to the Left

All of this will influence the future of the SPD, the oldest party in Germany. In the past years it turned from a big player into a sorry sight. Today, the party positioned in the center-left of the political spectrum will likely move further left in order to be more distinguishable. The new leaders are known to be part of the SPD’s left wing.

There is an even more important question: What are the implications for the government coalition led by Chancellor Angela Merkel of the conservative CDU, in which the SPD is the junior partner? Saskia Esken and Norbert Walter-Borjans have said they would not break up the coalition head over heals. But if they do not do so next week, they might still pull the plug in January.

They could do so if the CDU rejects the demands the new SPD leaders are making. They might do so because the SPD has been sucked dry since it joined Merkel’s first grand coalition in 2005. The chancellor was credited for everything the Social Democrats contributed. They might pull out because they might come to the conclusion this is the only way to save the SPD.

Many Questions and Ifs

The future of both the party and the Berlin coalition now depends on the two new leaders, on how much support, if any, they will be getting from other key figures in the SPD, from their faction in the Bundestag and from the few remaining SPD-led governments in the federal states.

There are many questions, many ifs, there are demands, new circumstances and new implications. At the same time there is no time. The SPD’s party convention commences in four days from now. Saskia Esken and Norbert Walter-Borjans do not even have the time to talk to everyone in their own party HQ before big decisions need to be taken. Everyone knows this kind of situation is far from ideal.

And there is one big danger: If the new duet at the top does not get the support it needs, the SPD might implode, meaning the desolate situation might worsen even more. So far, the party has lost millions of voters within 14 years. If it loses more, there will hardly be any voters left.

In the past days, Saskia Esken and Norbert Walter-Borjans have come up with conditions for the continuance of the grand coalition. Those include improvements for the so-called Climate Package the coalition recently pushed through the Berlin Bundestag, an increase of the minimum wage and changes for calculations of pensions.

Esken and Walter-Borjans expressed these demands during the SPD’s member survey. They were meant to show where the differences are, between them and the other candidates. The problem is that they are now stuck with these demands. They cannot retract them. If they do, they will lose a lot of credibility just after being voted to the top of their party.

This leads to yet another big question: Will the CDU and its Bavarian sister party CSU accept any new demands? Probably not. That is because these conservative parties have problems of their own. Also they know they would still become the strongest party should there be early general elections in Germany. In case this happens, they might just have to change horses, meaning they might try to form a new coalition with the Greens.

Whatever the SPD does under their new leaders Saskia Esken and Norbert Walter-Borjans, it will have to be convincing. The new duet at the top will have to convince key party colleagues, their faction in the Bundestag, the supporters who votes for them and the SPD members who voted for their competitors.