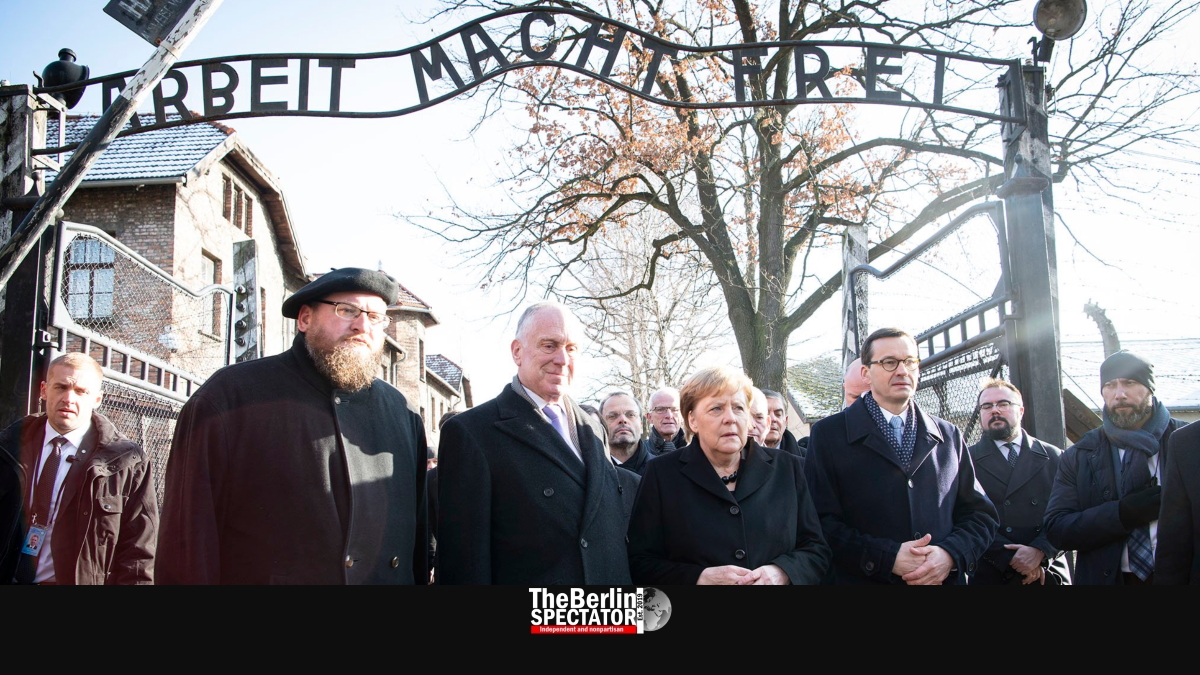 For the first time during her 14-year term as Chancellor, Angela Merkel has visited the former Nazi death camp Auschwitz in Poland, which is a memorial today. She said this part of Germany’s history could never be relativized.

Chancellor Angela Merkel entered the former concentration camp Auschwitz-Birkenau with Polish Prime Minister Mateusz Morawiecki. The President of the Central Council of German Jews, Josef Schuster, accompanied her too. So did Ronald Lauder, the President of the World Jewish Congress (WJC), and Romani Rose of the Council of Sinti and Roma in Germany.

Merkel said intolerance needed to be fought decidedly. She was ashamed because of the “barbaric crimes committed here by Germans”, the Chancellor said in Auschwitz-Birkenau according to German-language media. In a systematic way and in cold blood, at least 1.1 million humans had been murdered at the camp.

“We need to remember these crimes”, Merkel said. This part of history needed to be told and retold all the time. A line could never be drawn under this chapter of history, and there could never be any relativization. The millions of murders during the Shoah, the genocide among Sinti and Roma and the killings of prisoners of war, homosexuals and handicapped people could not be comprehended with a human intellect, Merkel stated.

At this stage, Jewish life in Germany was threatened by antisemitism again, the Chancellor said at the former death camp. Today, racism and hate crime were experienced as well. Auschwitz was an imperative. The dignity of all people needed to be protected.

75 Years After Auschwitz: Government Wants Jews to Stay in…

The Nazis used Zyklon B gas to murder more than a million people, mostly Jews, in Auschwitz. During the tour of the memorial site, Chancellor Merkel saw empty gas canisters. Auschwitz-Birkenau was the largest death camp Nazi Germany ran.

Josef Schuster said the trip was positive since Merkel had set an important example. By going to Auschwitz, she had demonstrated her clear stance on the crimes committed by the Nazis, which she had also expressed throughout her term as Chancellor.

During the visit, Ronald Lauder thanked Angela Merkel for announcing financial support for the Auschwitz-Birkenau Foundation which runs the memorial. A contribution in the amount of 60 million Euro (66 million Dollars or 51 million Pounds Sterling) was announced.

“Antisemitism remains a vile, pervasive and resurgent force in the world today, making Holocaust education more vital than ever”, Lauder stated on site. “Chancellor Merkel has been a valued and reliable ally in the fight against this oldest of hatreds”, the WJC’s President stated on site.

In October 2019, the World Jewish Congress honored Chancellor Merkel with the WJC Theodor Herzl Award. The step was criticized because of Germany’s Israel policies. Ronald Lauder defended the decision in an opinion piece published in The Jerusalem Post.