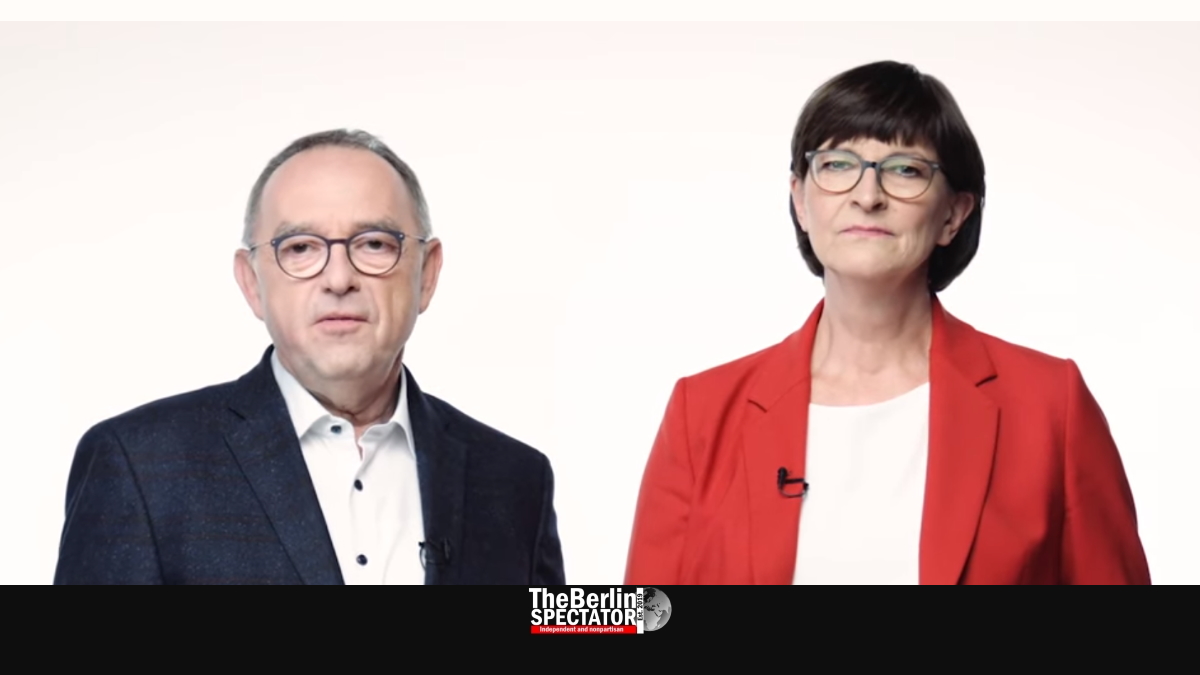 As expected, Saskia Esken and Norbert Walter-Borjans were elected leaders of the oldest party in Germany, the SPD. The new team wants to take the Social Democrats into a “new time period”.

The necessity for that “new time period” is not being disputed by anyone, but not all SPD members agree with the left-wing approach Saskia Esken and Norbert Walter-Borjans intend to take. It is not the first time this kind of discussion is coming up. And the SPD is not the only party with different wings.

But the Social Democrats are the only party which has slumped this badly. In 1998, they got more than 40 percent of the vote. Back then, Gerhard Schröder, a more conservative SPD personality, lead the party and he won the elections. Today’s polls show the unimaginable: Only 15 percent of all German voters support the SPD.

A lot has happened between 1998 and 2019. The world changed. The country changed. An extremist right-wing party, the ‘AfD’, has entered the Berlin Bundestag. And several party leaders of the past, including Andrea Nahles, Martin Schulz, Sigmar Gabriel and Kurt Beck, have not managed to stop the shrinking.

The question whether the two new leaders will change the trend is open, a day after they were confirmed by their party congress, and a few days after being chosen in a member survey. Whether they will end the government coalition with Chancellor Angela Merkel, in which the SPD is the junior partner, cannot be answered today either.

CDU Does Not Want to Renegotiate

Saskia Esken got the votes of 75.9 percent of all party delegates, while 89.2 percent voted for Norbert Walter-Borjans. These results are good, compared to the 66 percent their predecessor Andrea Nahles got last year. But apart from these results, nothing is positive, at this stage. That is why everyone is waiting for that “new time period” the party announced.

Read separate article on the SPD and its problems: ‘Germany: The Salvation of a Party’

Both new leaders are known to be critics of the grand coalition they are in. Now they intend to renegotiate parts of the coalition agreement their predecessor signed. This idea is not exactly going down well in Merkel’s CDU, to say the least. The conservatives says talking about things was always fine, but renegotiating the rules during the football match was not.

Should the SPD’s new leaders end the coalition, the CDU would have less to worry about. They lost support too, but they are still the strongest party in Germany. After early elections, which do seem possible, they would probably have to change coalition partners. The Greens, a party the CDU should probably complain about less these days because they might need them soon, are a candidate here.

At least the SPD will not end the coalition tomorrow. At the convention, the delegates voted against a motion in which called for an immediate end. But they do support renegotiating the minimum wage, the so-called ‘Climate Package’ and other aspects. And that path might lead to an end of the coalition anyway.

The new chairlady Saskia Esken stressed, the motion for renegotiation would give the grand coalition “a realistic chance for a continuation”. Her quote shows: An end to the coalition and early elections in Germany could follow soon, in case neither the SPD nor the CDU change their minds on changing the rules during the match.

The alternative to this grand coalition might turn out to be a minority government lead by the CDU and its Bavarian sister party CSU, a coalition between the CDU, the CSU and The Greens, or a three-way left-wing coalition lead by The Greens, with the SPD and ‘The Left’ as junior partners.