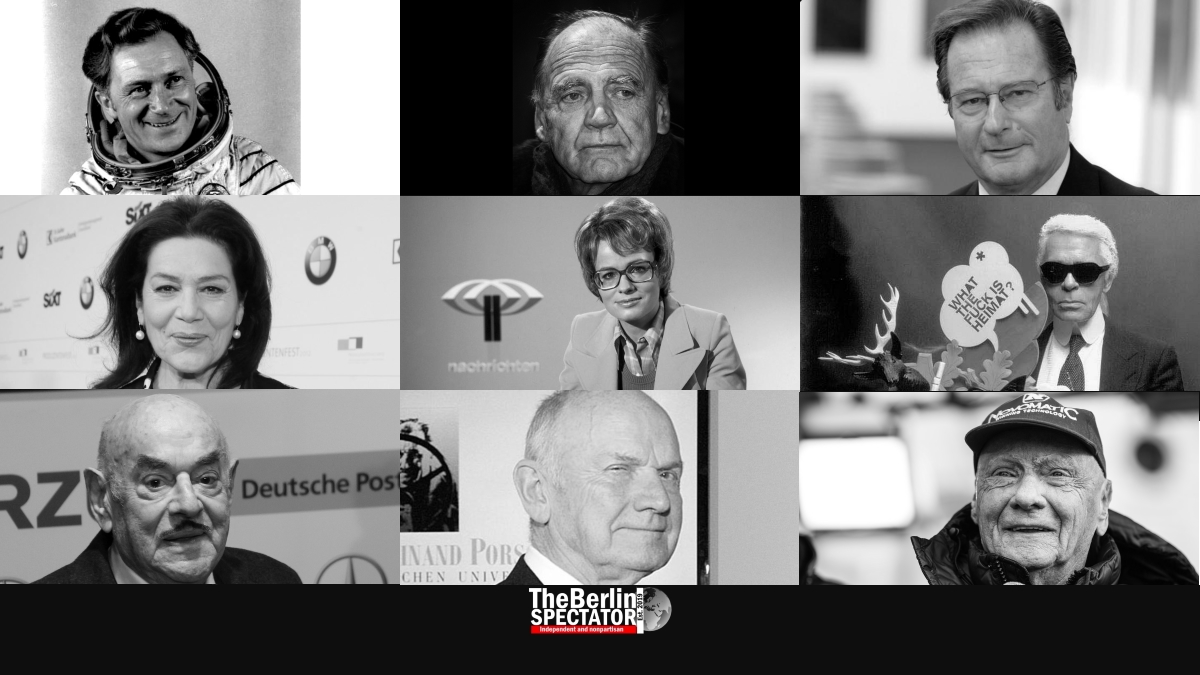 These prominent individuals from the German-speaking world, meaning from Austria, Germany and Switzerland, passed away in 2019.

Born in Zurich in 1941, Bruno Ganz became famous around the world as one of the most gifted Swiss actors of all time. His career started on theater stages. He was more active in Germany than in his native Switzerland. By the mid-1970s he had become one of the most important actors in German motion pictures. In the 2004 movie ‘Downfall’, he played dictator Adolf Hitler and was awarded many prizes for that performance. All in all, he was part of more than 100 motion pictures. Bruno Ganz died on February 16th, 2019, in Wädenswil (Switzerland).

Karl Lagerfeld was born in Hamburg on September 10th, 1933. After the war, when he was 22, he won a design competition with a coat for ladies. From that moment onward, his career started advancing. Quickly, he became Germany’s most prominent fashion designer. But he commented on politics too. Karl Lagerfeld was also known for his funny quotes. Shortly before his death, he talked about his skin by saying he did not expose himself to the sun anymore. “I don’t want to look like an old turtle.” He died on February 19th, 2019, in Neuilly-sur-Seine (France).

Klaus Kinkel was 9 years old when the war was over. He became a lawyer and politician who climbed up the hierarchy ladder in the party FDP. In the late 1970s, he became head of the West German Federal Intelligence Service, in 1991 Minister of Justice. Under Chancellor Helmut Kohl, he was Foreign Minister by 1992 and Vice Chancelllor in 1993. As Germany’s chief diplomat, one of his challenges was the Serbian war of conquest in Bosnia and the complicated and unbearable situation it lead to in the former Yugoslav republic. Kinkel died on March 4th, 2019, in St. Augustin.

She was one of the most prominent actresses in the German-speaking world, but also a director and an author. During her stunning career, she was part of as many as 220 TV and cinema movie productions. She died of cancer on April 21st, 2019 in Munich.

The Austrian wanted to become a racing driver early on. His father, a wealthy businessman, refused to support him. So Niki Lauda used his prominent last name to get a loan with which he bought himself into racing. From Formula 3 he worked himself up into Formula 1 and became Champion of the World three times. In August of 1976, he almost died in a terrible accident on a German race track. Later he became the man who did not want to “drive in circles” anymore, but did so anyway, by returning to racing just a few years later. He founded two airlines. Lauda died on May 20th, 2019, in Zurich. (Read more about Niki Lauda here.)

She became a prominent TV personality as the first woman in West Germany who presented television news. After her time at ZDF TV, she became a correspondent for the ‘Stern’ magazine. First she covered Israel and the rest of the Middle East. Later she found herself in Washington D.C.. Wibke Bruhns authored books, including one about Jerusalem. In another one, she wrote about her father, a high-ranking Nazi who was executed after WWII. Wibke Bruhns died on June 20th, 2019, in Hamburg.

Artur Brauner was born in Poland, where the Nazis persecuted him and his family because they were Jews. He fled to the Soviet Union, where he hid. After the war, he came to West Berlin. Over the years, he became a legendary film producer. Brauner was involved in more than 260 motion pictures. Many of those were about the Holocaust, including ‘Europa Europa’ (German title: ‘Hitlerjunge Salomon’). This particular movie got a Golden Globe as ‘Best Foreign Film’ in 1991, it was nominated for an Academy Award in 1992, and it got both the New York Film Critics Circle Award and an award from the Boston Film Critics Society. Artur Brauner passed away on July 7th in Berlin.

The Austrian manager definitely had gasoline in his veins. During his impressive career, he headed Porsche, Audi and Volkswagen. While doing so, he contributed to the development of legendary models, such as the Porsche 911, the Porsche 914, the Audi V8 and the Volkswagen Phaeton. Piëch reached the peak of his career in 1993, when he became CEO of Volkswagen. Only four years before his death, in 2015, he resigned as Head of the Supervisory Board of Volkswagen. On August 25th, 2019, Piëch died in Rosenheim. (Read more about Ferdinand Piëch here).

Lutz Colani, who later changed his first name to Luigi, was born in Berlin, to a Swiss father and a Polish mother, in 1928. In the 1950s, he worked for McDonnell Douglas in California. Over the following decades, he became a famous designer for cars, airplanes and household items. His idea was to optimize all objects, regarding their design and the material they were made of. Colani was admired in Europe and America, but also in China and Japan. He died on September 16th, 2019.

Sigmund Jähn was born in Nazi Germany. Later, he became a GDR citizen. From 1955, he was part of the communist state’s Air Force. Ten years later, Jähn studied at the Gagarin Military Academy in Moscow. Because he had entered the ‘Socialist Unity Party’ early on, and because of his good Russian language skills, he got the chance to become a cosmonaut. In this position, Sigmund Jähn became the first German in space. With Sojus 31, he hit the ‘final frontier’ on August 26th, 1978. That mission lasted 7 days, 20 hours and 49 minutes. Jähn died on September 21st, 2019 in Strausberg.

More German celebrities who died in 2019:

He was an expert for gastroenterology, hepatology, oncology and infectiology at Schlosspark Clinic in Berlin. Fritz von Weizsäcker also had a prominent father. The late Richard von Weizsäcker was President of the Federal Republic of Germany and Governing Mayor of Berlin. On November 19th, 2019, Professor Fritz von Weizsäcker was stabbed to death by a mentally challenged individual during a speech he held at his clinic.

In the GDR, Manfred Stolpe was a functionary for the Lutheran Church. According to his supporters, he did a lot of good for citizens of the communist state. His foes accused him of having been a State Security agent, code name ‘Sekretär’. In reunified Germany, he was the very first First Minister of the federal state of Brandenburg before becoming Transport Minister in Berlin. Stolpe died of cancer on December 29th.