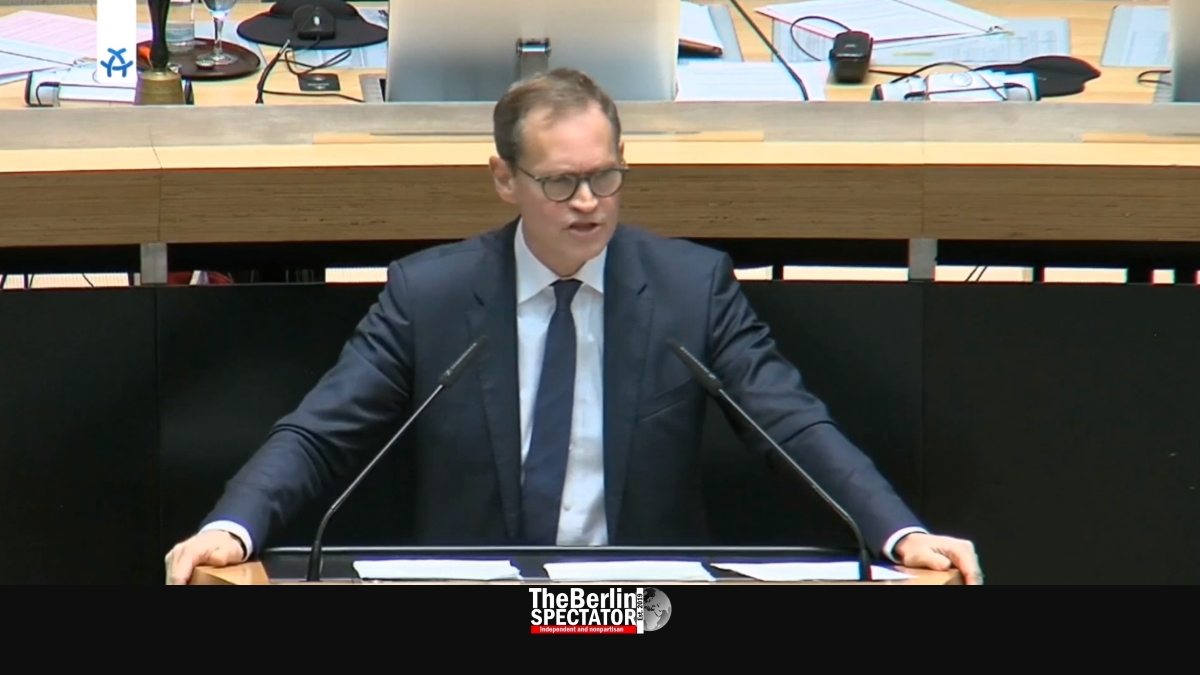 The Berlin House of Representatives approved the city state’s budget for 2020 and 2021 on Thursday, after a long discussion marathon. Governing Mayor Müller shot back at the opposition after being criticized harshly.

After a discussion of 11 hours, Governing Mayor Michael Müller’s coalition parties, the Social Democrats (SPD), The Greens and ‘The Left’, pushed the budget for the city state of Berlin through the House of Representatives with their majority. The opposition, including the conservative CDU, the liberal FDP and the extremist right-wing ‘AfD’ voted against the budget.

The CDU’s caucus leader Burkard Dregger said Müller’s government would go down in history as “the coalition of missed opportunities”. He told Berliners to hang in there. The “red-red-green insanity” would be over in two years at the most. Considering his CDU is at around 17 percent support in the latest polls, Dregger promised quite a lot.

According to the FDP’s floor leader Sebastian Czaja, whose party is at 5 percent in the polls, “the strength of this government is failing”, while the radical right-wing ‘AfD’ accused the coalition of imposing “eco-fascist bans”. They were referring to the Diesel ban which came into effect on some Berlin streets. In Berlin, the ‘AfD’ is at about 10 to 11 percent. Berliners were never attracted by Nazis or other right-wing extremists much.

The opposition parties criticized the so-called ‘rent cap’ which they say does not adhere to the law, issues in Berlin’s public transport system, an “old-fashioned administration” and a bad education policy. More support for the German capital’s police was demanded. On top of it all, Müller and his government were accused of fighting car owners in Berlin.

Berlin’s Senator of the Treasury, Matthias Kollatz, who is one of Müller’s SPD colleagues, hailed the city state’s investments. Berlin had never made investments of this magnitude. The growing city had made them necessary, for the infrastructure, housing, kindergartens and schools. An additional 4,200 state employees would be hired, Kollatz stated.

The SPD’s partners from ‘The Left’ and The Greens said a solidary, climate-neutral and open-minded city was their goal. Its residents needed to be allowed to live self-determined lives.

In a passionate speech, Governing Mayor Michael Müller (seen on main photo at top of page) defended his coalition’s policies against the opposition’s attacks, including the ‘Berlin Bonus’ for thousands of state employees, who will receive 150 Euro (168 Dollars or 124 Pounds) per month each. He said this would help individuals with average salaries to make ends meet.

Müller rejected the opposition’s claim according to which the ‘Berlin Bonus’ was an “election gift”. Also he said he was furious about the constant “Berlin bashing” the opposition was engaged in. The way politicians on the other side of the aisle had talked down Berlin was intolerable, Mayor Müller told the House of Representatives.

He reminded the CDU of its own position in this regard. When the conservatives had been in power, they had condemned “Berlin bashing” too, Müller said. Berlin was a great city. It was not a coincidence that tens of thousands of people and big enterprises moved to the German capital. This development was the result of the reliable policies of his coalition.

According to the latest polls, Berlin still has a center-left majority. But if Berliners were to vote today, the Greens would likely fill the Governing Mayor’s seat, since they have overtaken the SPD and became the strongest party in Berlin with around 24 percent, while the SPD has shrunk to 16 percent. With 17 percent each, both ‘The Left’ and the CDU are stronger than the SPD these days.