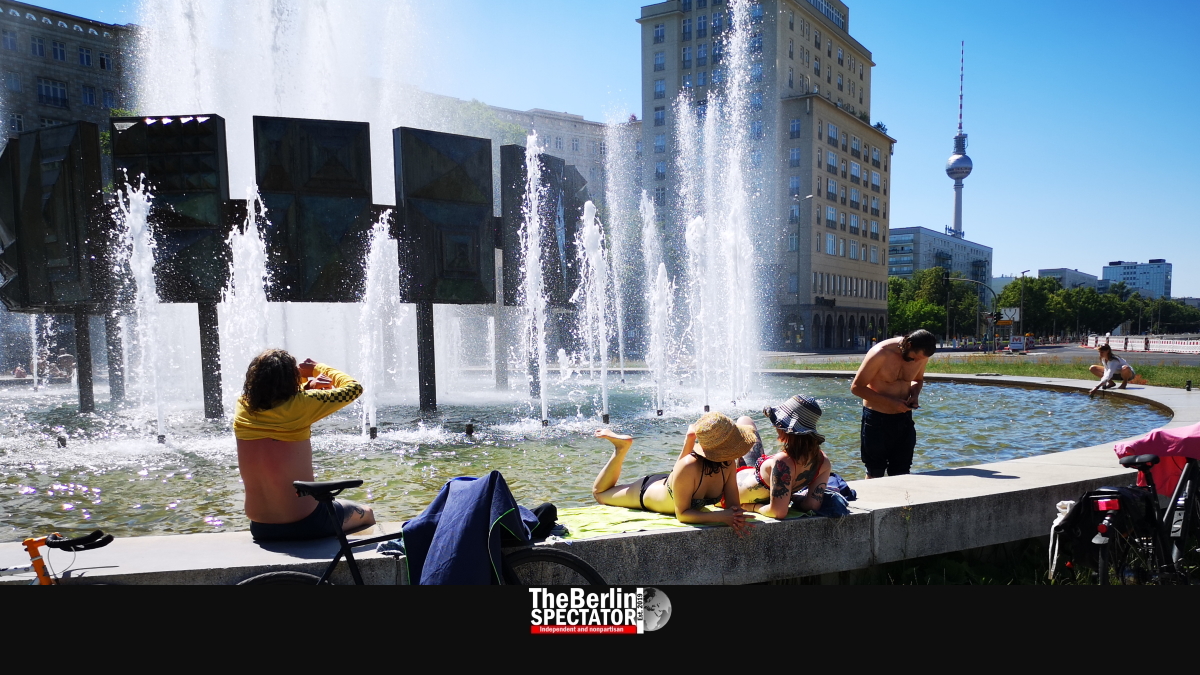 Berlin celebrated a gazillion anniversaries in 2019, and it argued about big problems without even getting close to resolving them. Also the German capital’s residents were fried like chicken during the summer.

The affordable housing crisis did not just pop up in January of 2019, but it got worse during this year. Tens of thousands of Berliners and expatriates, among them many students, need places to live in. While they are searching for rooms or apartments, Governor Mayor Michael Müller’s center-left coalition argues about dispossession. In fall, they approve their controversial ‘Rent Cap’. Whether it will help or mess up the situation more, remains to be seen. Ready to sleep under a bridge? Berlin is the place.

On January 19th, Germany celebrates 100 years of Women’s Suffrage. Hundreds of flights are cancelled, due to walkouts, while heavy snowfall leads to severe issues in Bavaria and Austria. On January 22nd, 2019, exactly 55 years after the ratification of the Élysée Treaty, Chancellor Angela Merkel and President Emmanuel Macron sign the Treaty of Aachen for more cooperation between France and Germany. Très bien.

On January 19th, 2019, thousands rally for sustainable agriculture at Brandenburg Gate. In the meantime, the national discussion about imposing a speed limit on the German Autobahn is continuing. Germany continues to practice climate protection at 150 mph since the liberals and conservatives would rather look for “more intelligent solutions” (government spokesman Steffen Seibert). There seems to be so much wisdom in Berlin.

In mid-February, thousands of BVG employees take part in a warning strike. They demand a reduction of working hours and bonuses for everyone. Without ‘U-Bahn’ trains, trams and buses, Berlin is a mess. But somehow residents manage to get through the day by going to work by bicycle. More BVG strikes follow. In the meantime, Airbus announces an end to the production of its large A380, parts of which are being manufactured in Hamburg.

The number of tourists in Berlin is skyrocketing. As many as 13.5 million of them visited the German capital in 2018. Come on! In this regard, Berlin is almost like Venice. “We need to fight for Europe”. This is what Merkel says ahead of the European elections, while President Steinmeier is being criticized for courting the Iranian leadership.

The ITB tourism trade fair in March of 2019 leads to political discussions. Malaysia is the fair’s partner country, but its leader made antisemitic statements. The same applies to members of the BDS movement who protest against Israel’s participation by spreading conspiracy theories about the only Jewish state in the world right at Berlin’s fairground.

In March, protesters demand equality on Women’s Day. The Palestinian terrorist Rasmea Odeh leaves Germany just before she would have been deported, the Berlin Senate takes steps to improve the breathing air quality in the city and none other than Greta Thunberg joins a Fidays for Future rally in Berlin.

In April, taxi drivers stage a huge protest since they disagree with the federal government’s plans to give Uber and similar services more rights in Germany. On April 7th, Berlin enjoys it first real spring weekend with a lot of sun. At this stage, residents have no clue a brutal heat wave will hit them two months later. A big protest for affordable housing takes place in early April too. Many German tourist die in a Madeira bus crash, and the extremist right-wing party ‘AfD’ is being fined for illegal party donations.

The traditional May 1st protests in Berlin commence peacefully. Later hundreds of participants try to provoke the police on site. Dozens of protesters get arrested. One policeman kicks a suspect who is already lying on the floor, but all in all the police does a good job preventing an escalation. On May 12th, the 70th anniversary of the end of the Berlin Airlift is being celebrated at Tempelhof Airport.

On May 17th, the Berlin Bundestag votes for a motion which condemns the so-called BDS movement as antisemitic. On June 2nd, Andrea Nahles, the chairlady of Barley’s and Müller’s party SPD, steps down. On the same day, thousands of protesters on bicycles demand a new traffic policy. During the ‘Al Quds March’, Arab antisemites and their German supporters spread hatred on the streets of Berlin. Counter protesters demonstrate against antisemitism.

On June 9th, the Carnival of Cultures bring great sounds, colors, dances and more to Berlin. This time even the weather is great. On June 18th, the European Court of Justice crushes the German Transport Minister’s plans to impose an Autobahn toll on drivers from abroad. The court does not like the fact that German drivers would have been compensated through vehicle tax deductions and sees discrimination for that reason. Later in 2019, a Bundestag review board starts to look into the scandal and the minister’s role. And June 30th turns out to be Berlin’s hottest June day ever.

On July 8th, 2019, Walter Scheel, ‘the man who changed horses in Bonn’, would have turned 100 years old, had he not died three years earlier. Berlin’s Night of Museums, a cultural event lots of cities around the world have “borrowed” by now, draws thousands of visitors. In July, Germany’s Defense Minister Ursula von der Leyen, is suddenly being nominated for the European Union’s top post, while CDU chairlady Annegret Kramp-Karrenbauer surprisingly becomes her successor. In the meantime, some parts of Germany get hit by the hottest day of all time. Berlin’s Christopher Street Day mesmerizes the LGBTIQ community.

In August, ‘Zoo Berlin’ celebrates its 175th anniversary, but without its lions, tigers and panthers. The Berlin Spectator reports a giant leap for mankind, as our reporter hits the streets with an e-scooter and nearly gets sandwiched between a bus and a taxi. Those e-scooters are being discussed all summer long. In the meantime, Ferdinand Piëch dies. (Read ‘The Man with Gasoline in his Veins’ or our piece about Austrian, German and Swiss celebrities who were lost in 2019).

In September of 2019, state legislature elections take place in two eastern German provinces, namely Saxony and Brandenburg. The extremist right-wingers are very strong, but luckily come in second only. ‘Billy Boy’ condoms are being recalled by the manufacturer. As it turns out, German tourists are not really being loved much. A terrible, deadly accident saddens and angers Berliners. In Frankfurt am Main, the IAA Auto Show takes mobility to the future. At least that is what they say.

Berlin’s ‘Görlitzer Park’ is still a nightmare, thanks to the drug dealers there. The issue is being discussed, again, in fall. The same applies to ‘Expensive Encounters in the Decelerated Zone’ in Berlin’s Kreuzberg district. And a million ‘Fridays for Future’ protests take place. The politics of tampons are another popular discussion subject in Germany in September. In November, the Berlin Bundestag finally decreases the tampon tax. In the meantime, some of the last Nazi trials commence.

Both the Berlin World Clock and the city’s TV tower celebrate their 50th anniversary. And the Berlin Marathon produces winners. At the same time, it is easy to lose the race (‘The Berlin Perspective: How to Lose the Berlin Marathon’). Extinction Rebellion annoys many Berliners by shutting down parts of the city.

In Halle, a Nazi tries to murder Jews in the city’s synagogue. Since he fails to break into the building on Yom Kippur, the most important high holiday in Judaism, he murders two passers-by. This crime highlights a big problem Germany has, namely the rising antisemitism. In Berlin, a big protest against antisemitism takes place. Professor Gerald M. Steinberg writes an opinion piece about the old and new antisemitism for The Berlin Spectator, saying ‘I was Angry but Not Surprised’.

In 2019, Berlin is happy about two baby pandas with flight tickets to Beijing. Markus Söder, Bavaria’s First Minister (governor) turns out to be one of the two rising stars in the conservative parties CDU/CSU. He might move into the Chancellery one day, some believe. Another CSU member, Transport Minister Andreas Scheuer, is getting into more trouble because of his Autobahn toll disaster. And the Berlin Senate approves the ‘Rent Cap’.

In November, left-winger Bodo Ramelow wins the state legislature elections in Thuringia, but the partners he needs do not. Also the Nazis are very strong. On November 9th, Germany celebrates the 30th anniversary of the fall of the Berlin Wall, and commemorates the victims of the Night of Broken Glass in November of 1938, during which “the winter sky over Berlin was blood-red“.

Later in November, BER Airport gets an opening date, namely October 31st, 2020. Also the Bundestag approves compulsory measles vaccinations and the ‘Climate Package’. The Social-Democratic Party, SPD, which has been drowning in the polls for years (read separate feature ‘Germany: The Salvation of a Party’), elects new leaders. Tesla does not need new leaders, but intends to build a brand new and shiny factory in Brandenburg province, just outside Berlin. On November 25th, Berlin’s numerous Christmas markets open.