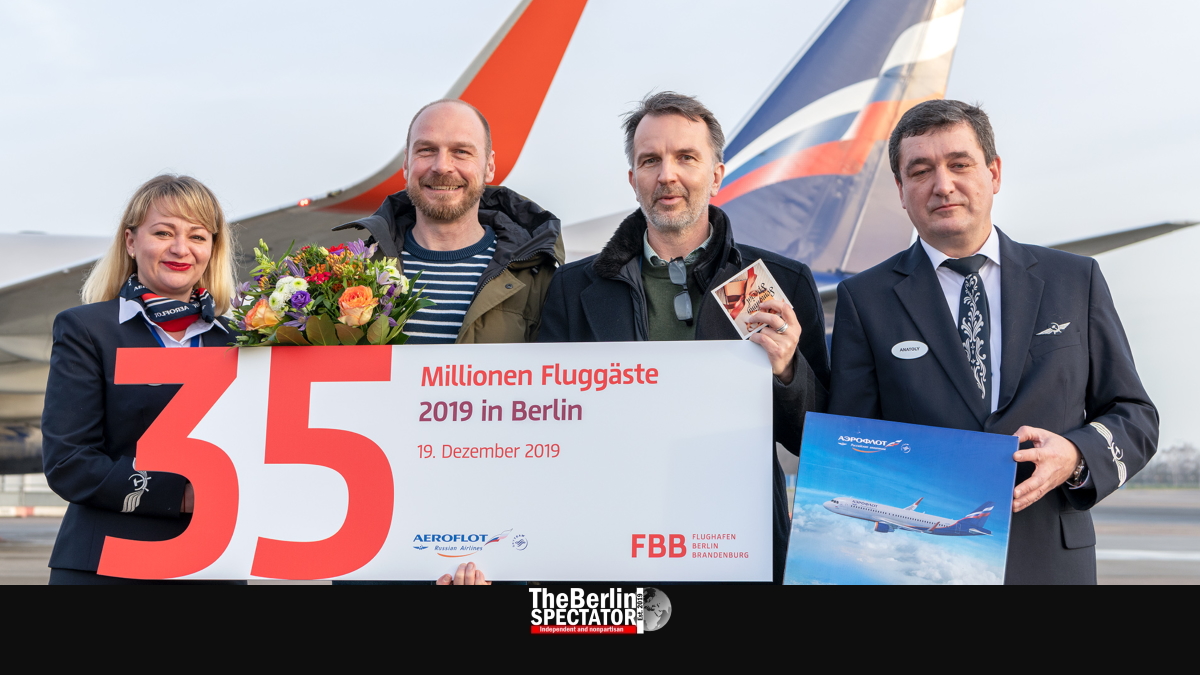 The sky is the limit at Berlin’s airports. The year is not even over, but the 35 millionth passenger was already identified. He was drowned in prizes.

When Sebastian Jurth went to Schönefeld Airport on Thursday, his only intention was to catch Aeroflot flight no. 2569 to Moscow. Neither did he think he would become a star, nor that he would be treated like a Foreign Minister. But that is what happened.

It turned out he was the 35 millionth passenger to check in at one of Berlin’s two operational airports this year. So his photo was taken and he was upgraded from economy to business class on his Aeroflot flight. In addition, he received a tiny model of an Aeroflot passenger plane and a voucher for a duty free shop.

At Schönefeld Airport, which will become Terminal 5 of BER Airport on October 31st, 2020, Sebastian Jurth also had to listen to a speech held by Engelbert Lütke Daldrup, the CEO of Flughafen Berlin Brandenburg GmbH, the company that runs Berlin’s big airports. He was proud of this year’s record passenger numbers.

“Berlin is among the top 3 travel destinations in Europe”, Lütke Daldrup said. “The appeal of the capital area is unabated and leads to increasing passenger numbers.” The good connection between Berlin and Brandenburg and Moscow had contributed to the development, he stated.

Lütke Daldrup also thanked the staff, partners and service providers. Without them, the record numbers would not have been reached. Because of their effort, especially during the holidays, the crowds had been dealt with successfully, he said on Schönefeld Airport’s tarmac.

Aeroflot’s station manager Anatoly Kachan said his company was honored. The largest Russian airline has been connecting Berlin to Moscow since 1946. At this stage, they offer five daily flights to Moscow. Rossiya Airlines, another brand owned by Aeroflot, offers one daily flight from Schönefeld to St. Petersburg. All in all, they transport 700,000 passengers from Berlin to Russia each year.

The honors for the 35 millionth passenger this year and the record passenger numbers may be positive, but they also highlight a problem: Once (and if) Berlin’s new BER Airport is finally being opened on October 31st of 2020, it will already be bursting. The new airport has an official capacity of only 28 million passengers per year, in the configuration it will have at first. It’s managers might want to call Houston.