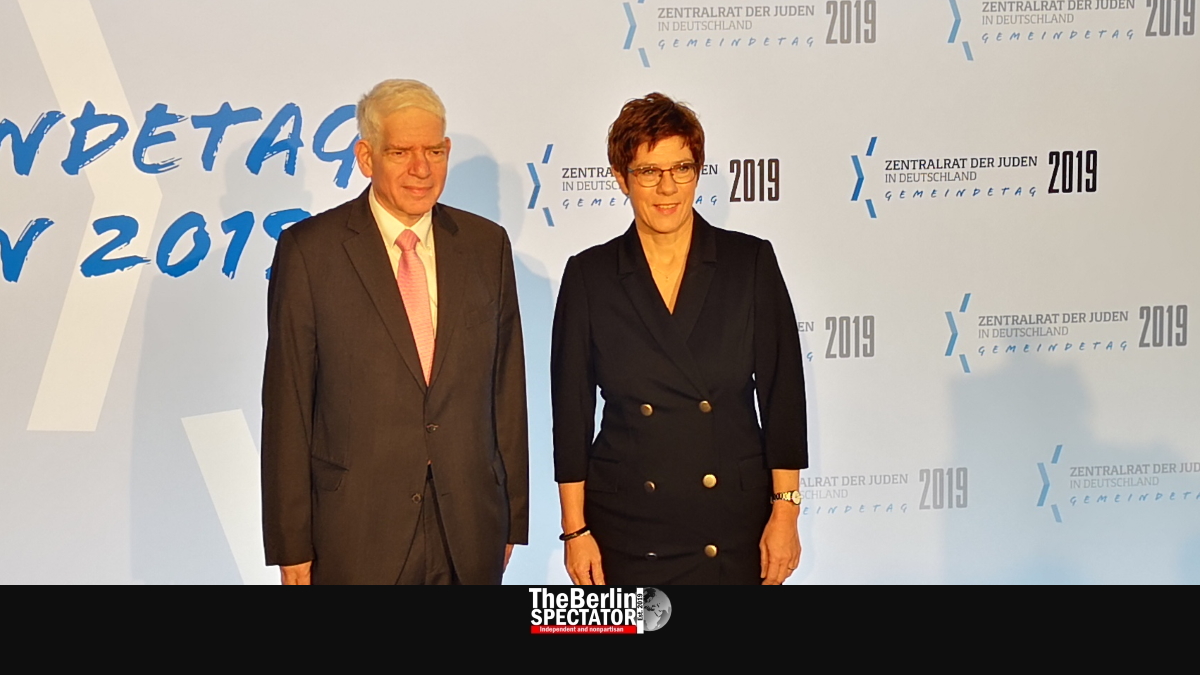 The Federal Republic of Germany and the Central Council of Jews in Germany signed an important treaty on Friday. For the first time since the Nazis rose to power in 1933, the country’s armed forces will have a Jewish chaplain.

Germany is a predominantly Christian country. For that reason, its ‘Bundeswehr’, the armed forces, exclusively had Catholic and Lutheran chaplains. Until today. Starting in 2020, at least one rabbi will join his or her Christian colleagues.

Defense Minister Annegret Kramp-Karrenbauer, also known as AKK, came to the ongoing Jewish Community Day in Berlin, where she signed the treaty with the President of the Central Council of Jews in Germany, Josef Schuster. A thousand participants of the four-day event applauded the step.

Schuster said this was a historic day. A new approach had been taken. Since the Nazis’ seizure of power, no Jewish chaplains had been part of the German armed forces. He thanked the Christian chaplains in the ‘Bundeswehr’ for supporting the step.

Once the Jewish chaplain is on board, he or she will not only be there for the few Jews in the German armed forces, according to Schuster, but for everyone. Through the Jewish chaplain, non-Jewish soldiers will get to know Jewish traditions. In many cases, the rabbi will be the first and only Jew they know. Prejudice will be fought that way, horizons will be widened. This is the Council’s hope.

Annegret Kramp-Karrenbauer, who is both Defense Minister and chairlady of Chancellor Angela Merkel’s conservative party CDU, said this was a special day indeed. Jews were an indispensable part of society. Referring to the Jewish Community Day’s motto “At Home in Germany”, she said being at home in Germany also meant being at home in the ‘Bundeswehr’.

The treaty was an important sign for Jewish life in Germany, AKK said. There was an imperative to shape a country without antisemitism or racism. The fact than hatred towards Jews was socially acceptable again, both open or disguised as ‘Israel criticism’, was very painful. She vowed extremism, in particular from the far-right, did not have a place at the ‘Bundeswehr’.

Minister Kramp-Karrenbauer told Germany’s Jews the armed forces would keep right-wing extremists away, or fire them. People with different backgrounds had been part of the ‘Bundeswehr’ for a long time. The latter followed the principle of unity and diversity.

‘Questions of Life and Death’

Because of the dangers of their profession, soldiers were confronted with questions of life and death, AKK told the Community Day participants. With chaplains, they could talk about those. This was helpful, especially during missions, the Minister said.

Annegret Kramp-Karrenbauer stated she wanted a Muslim chaplain as well, but there was no conversation partner in Germany’s Muslim community. The Central Council of Muslims represents less than two percent of all Muslims in this country.

Frank Müller-Rosentritt, a Berlin Bundestag MP from Saxony for the liberal-conservative party FDP, agreed with the label ‘historic day’. At the same time it was only natural to have Jewish chaplains, he stressed. And it was an important sign to German nationals, especially those in uniform. Not only would rabbis in the army be chaplains, but also educators regarding Jewish life in Germany.

There are about 300 Jewish soldiers in the German armed forces, and approximately 3000 Muslims. The overall number of soldiers is 22,100. Some 3200 of them are part of missions abroad.