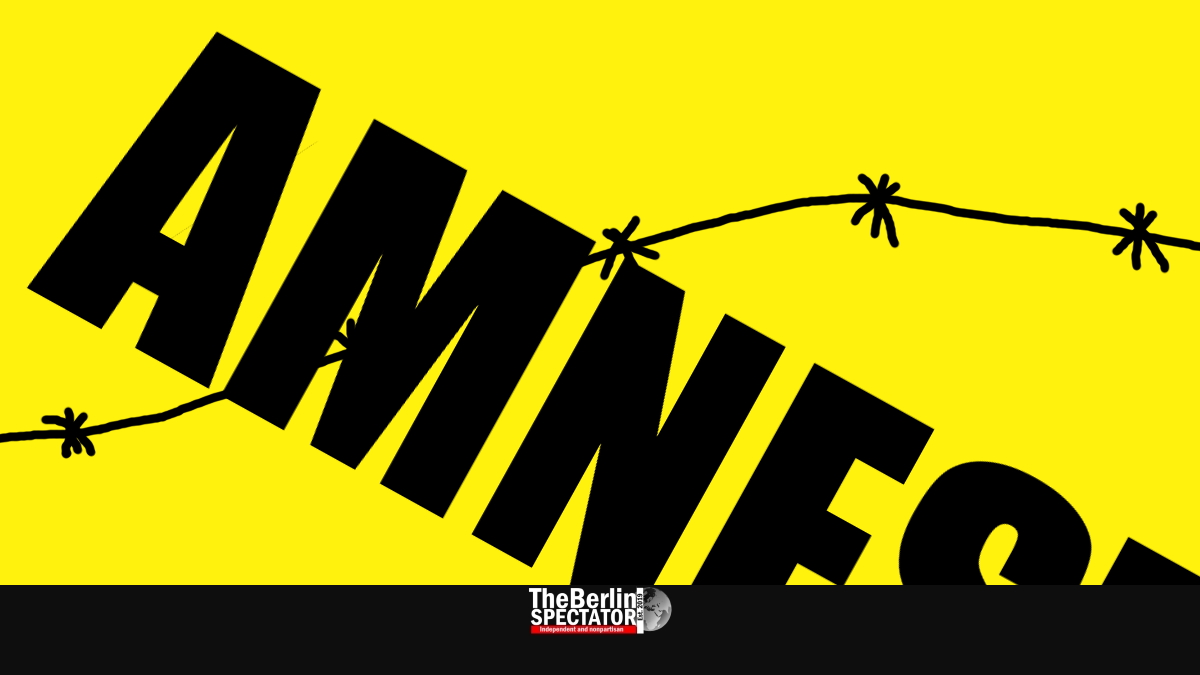 Founded in 1961, Amnesty International is one of the oldest and most famous Human Rights organizations in the world. It has done a lot of good. But now there is a report which unearths strong antisemitic tendencies.

When Amnesty International started monitoring the situation in Latin American countries ruled by brutal dictators in the 1970s and 1980s, the world was shocked by the content of the NGO’s reports, and rightly so. In El Salvador, people, including children, disappeared. In Chile, thousands of citizens were tortured and murdered by dictator Pinochet’s regime and its henchmen.

One big Human Rights organization, Amnesty International, published the terrible reality and made the world aware of unacceptable situations in numerous countries on several continents. In 1977, A.I. was awarded the Nobel Peace Prize for defending human dignity against torture.

Even today, Amnesty does the right thing by demanding an end to the persecution of the Rohingya in Myanmar, of the Uighurs in China and the LGBTI community in Uganda, and by calling for Human Rights for refugees in many parts of the world. Amnesty International’s role is important.

But there is a huge problem, one that has damaged A.I.’s credibility severely, and one that is destroying the organization: At least parts of the NGO, and numerous activists in it, actually seem to be supporting terror as long as it targets Israel, the only predominantly Jewish country in the world. There is a word for this kind of approach. It starts with an ‘A’.

During the past wars between the terror organization Hamas and Israel, for instance in 2012, following the international Amnesty International Facebook page was surprising. Their numerous posts there showed the world whose side the NGO was on, namely that of the terrorists who tried to kill Israeli civilians by shooting missiles at them.

The fact that Israel responded and protected its population was obviously the main problem, from the perspective of A.I. at the time. Aspects that did not fit their position, including rocket launchers set up in Gaza’s UNRWA schools, the abuse of Gazans as human shields, or the fact that Hamas pulled Israel into that war in the first place, were contested.

So were Israel’s unprecedented efforts to avoid casualties among civilians in Gaza by warning them before performing airstrikes at residential buildings Hamas used to attack Israel from. The Israeli Air Force dropped leaflets, made radio announcements, even called Gazans and “knocked” on roofs by dropping weak bombs first. In the history of warfare, no army has ever done this kind of thing, according to experts from the U.S., the U.K. and other countries. But Amnesty kept on blaming Israel.

A new in-depth report by the organization Jewish Human Rights Watch (JHRW) shows that things have not changed, and that Amnesty International is either engaging in antisemitic propaganda willingly, or that the organization is simply incapable of stopping those strong tendencies.

The investigation uncovered shocking antisemitism within the ranks of Amnesty International’s staff, as well as other examples of bias. Some of the examples suggest Amnesty is employing a number of extreme individuals who are terror backers whenever Jews are the targets.

JHRW says that A.I. employees were “blurring the lines between political criticism and outright institutional antisemitism” with their “unashamed attacks on Israel”. Apparently, the antisemitic tendencies at the big NGO have “led to Human Rights issues elsewhere being neglected and sometimes ignored altogether.”

Authored by David Collier, the new report is entitled ‘Spotlight on Amnesty International – From Bias to Obsession’. It examines “despicable displays of antisemitic rhetoric on the social media pages of Amnesty employees”, according to JHRW. The latter NGO say says that Amnesty International’s globally respected brand had been used by individuals who “relentlessly pursued their own agenda to focus Amnesty’s resources disproportionately on Israel.” This is the more diplomatic description of what is going on.

For a large organization like A.I., which is being respected by many people around the world, what Collier came up with is a damning indictment. When researchers at an NGO like Amnesty International post comments such as “F*ck Israel, long live Palestine!” or when they celebrate jihad terrorists, something is very wrong.

The same applies when A.I. employees join notorious Facebook groups that keep on uploading antisemitic statements or when they display “leniency to states that are notorious for their Human Rights violations, due to the sympathies of its employees.” This is exactly what is happening at Amnesty International, a charity many people donate to, especially around Christmas.

Terror Propaganda Instead of Human Rights

“This takeover is shameful and fundamentally goes against Amnesty’s core values as displayed in their 2019 statute”, JHRW believes. The watchdog organization says “Amnesty’s own core values and statute, as adopted by the charity in August 2019, mandate it to the principles of the universality and indivisibility of Human Rights, impartiality and independence, democracy and mutual respect.”

A.I.’s statue reads the NGO was ensuring it “speaks with one voice globally about the whole range of Human Rights themes and situations and their impact on people and communities.” JHRW’s conclusion: “By these tests, Amnesty is failing to live up to its own core values and constitution.”

The new report will be submitted to Amnesty International’s Global Assembly and International Board, as well as “to the appropriate regulatory bodies.” JHRW is demanding an independent investigation into the hatred spread by Amnesty and says the organization needed to be held accountable.

It gets even worse. Amnesty International does not seem to be the only Human Rights organization that may not want to grant those to Jews. The organization NGO Monitor has been looking into Human Rights Watch (HRW, not to be mixed up with JHRW), another charity of this kind.

NGO Monitor says HRW was whitewashing terror organizations, including Hezbollah, Hamas and the PFLP. A publication released by HRW this week, entitled ‘Born Without Civil Rights’, says Israeli authorities would “rely on broad provisions of military law to ban associations as ‘hostile organizations”.

According to NGO Monitor, HRW’s primary examples for this claim are “individuals who are members of internationally recognized terrorist organizations and/or groups closely linked to these organizations and who have been convicted of incitement, terror financing and membership in terrorist organizations”, namely Hamas, Hezbollah and the PFLP. What these groups have in common is their intention to murder as many Jews as possible and to wipe Israel off the map.

The lead researcher and author of HRW’s report is Omar Shakir, an activist in the so-called BDS movement who left Israel on November 25, 2019, following a nearly two-year legal challenge to force the government to extend his work visa. The request was denied.

NGO Monitor stated their detailed research clearly showed “that he was spearheading BDS campaigns against Israel.” Apparently, he was also engaging in “unprofessional research, minimizing terrorism, whitewashing terrorists, and recycling false and discriminatory arguments made by other NGOs, such as Amnesty International.” The circle is complete.

The report entitled ‘Spotlight on Amnesty International – From Bias to Obsession’ International’ with 205 pages can be accessed here.

There is a German version of this article. It is located here.