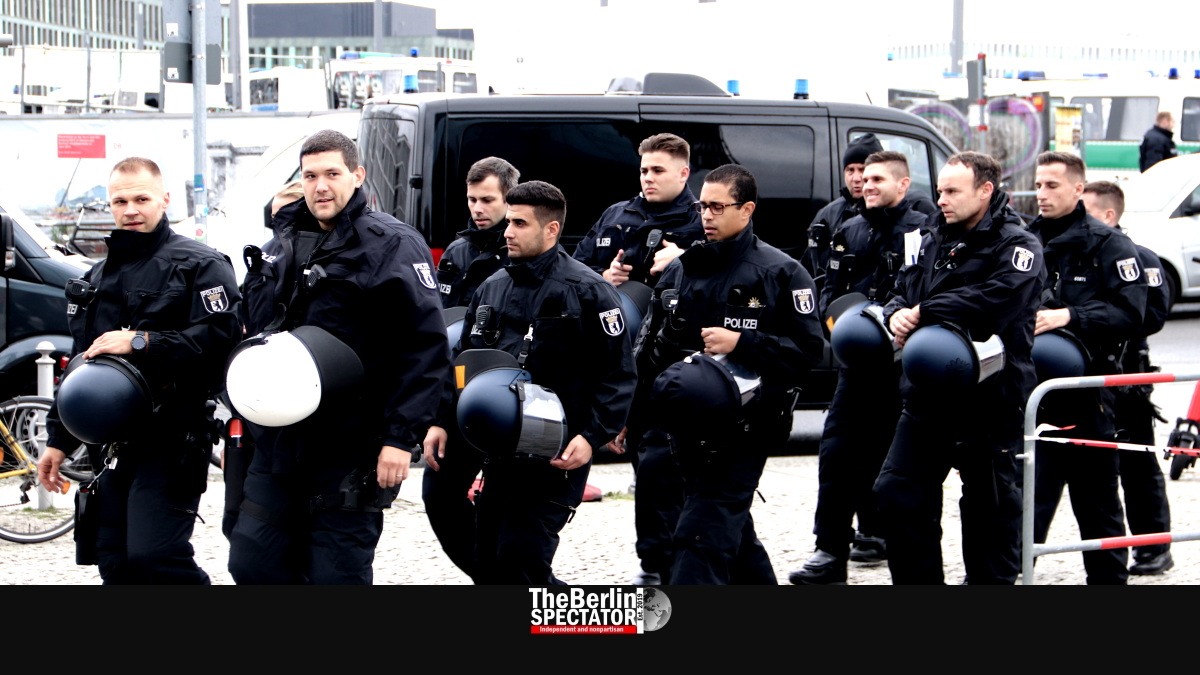 For several reasons, police are facing challenges in Berlin this weekend. A no-fly zone was established, streets and even the Spree river will be closed to traffic.

The Berlin police department and the federal police will not be able to meet the challenges this weekend poses on their own. Therefore police from other federal states will be helping out in the German capital. Thousands of officers are needed to get through the security nightmare on Sunday.

Security Cordon to be Established

On Saturday, police will have to deal with the Green Week food and agriculture trade fair and with farmers’ protests. But today’s tasks are easy compared to the upcoming challenges on Sunday. Chancellor Angela Merkel invited the President Emmanuel Macron, Prime Minister Boris Johnson, President Recep Tayyip Erdoğan and President Vladimir Putin to take part in the Libya Conference which is supposed to jump-start peace talks in that country.

Secretary of State Mike Pompeo will be coming as well. So will representatives from the UAE, China and other countries. Especially Putin, Erdoğan and Pompeo require a tight security cordon of large areas around them.

What this means is that the highest security level will apply. There will be a no-fly zone above parts of Berlin, the Spree river will be closed around the government quarter and traffic will be intense because of numerous closures. The Libya Conference at the Chancellery is scheduled to commence at 1:30 p.m. on Sunday, but the security measures apply long before.

Thousands of Police Officers on Duty

The Berlin police announced restrictions in and around the government quarter and at Tegel Airport, where most conference participants will be arriving. Attempts to get into the no-fly zone or the blocked part of the Spree river will be treated as crimes.

In the western part of Berlin, traffic jams are a foregone conclusion because of a soccer match that will be taking place at the Olympic Stadium on top of it all. Getting to the trade fair ground by car will be a mission impossible, because of the ongoing Green Week and all other aspects which will make this Sunday rather intense.

While neither the Berlin police department nor the federal police were ready to volunteer information about how many officers will be on duty, German-language media reported that 1700 police would be coming in from outside the capital. Guarding the airports, the government quarter, the river, the trade fair and the soccer match at the same time adds up to a lot.

In addition, ten protests around the Libya conference were registered so far. Those pose yet another challenge to police and they will hamper traffic in Berlin even more. Because of all kinds of developments, the plan of action for the police is being updated all the time.

Berliners and the city’s visitors were asked to refrain from going to the city center by car this weekend and especially on Sunday. A large area will be closed to traffic, including parts of ‘Strasse des 17 Juni’, ‘Unter den Linden’ and ‘Luisenstrasse’. Several streets that connect Tegel Airport and certain embassies to the Chancellery will be closed temporarily as well.

Security Measures to Kick in on Saturday

The extensive security measures will be commencing on Saturday evening and ending on Monday morning. Police helicopters equipped with infrared cameras will be flying circles above Berlin all the time. The city’s hospitals were ordered to be ready for any eventualities. Manholes in the streets all over the government quarter are being closed, officers with dogs trained to locate explosives are searching the area around the Chancellery. Several hotels are increasing their security too.