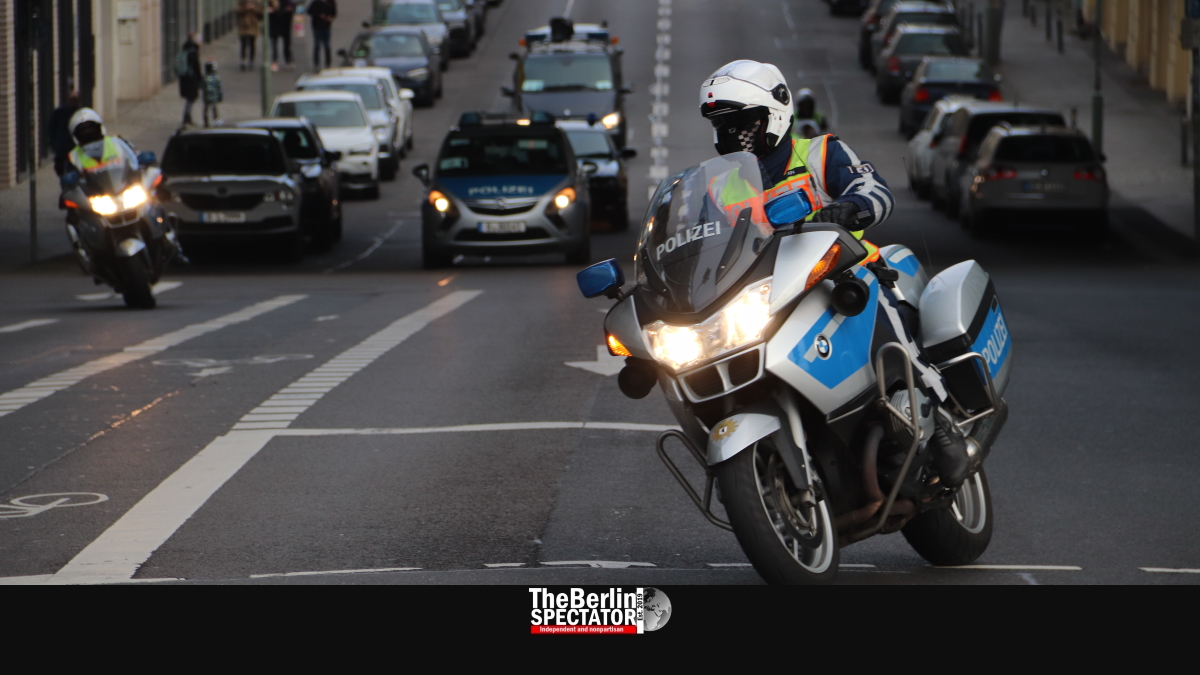 Thousands of police officers turned Berlin’s government quarter into a fortress on Sunday. They came in armored vehicles, helicopters, vans, buses and boats, on horses and motorbikes.

Police in Berlin followed an overkill strategy today, as several heads of government, heads of state and other leaders assembled at the Chancellery for the Libya Conference. Berliners and regular visitors had to bypass large areas in the center since they were cordoned off.

Several tourist magnets in Berlin were police magnets today. At Potsdamer Platz, police with machine guns and armored vehicles blocked several streets before the conference participants headed for the Chancellery. Guests of the Ritz Carlton were not exactly happy since they were not allowed to enter their hotel.

The same applied to a French employee of the expensive facility. He was worried about getting into trouble for being late, but there wasn’t much he could do about it. Dozens of tourists who arrived at Potsdamer Platz in spite of the cold wind were surprised to see more police than in an action movie.

Things looked better a bit further north, at Brandenburg Gate. Here, police blocked ‘Pariser Platz’, the square in front of the tourist attraction, but tourists or anyone else could access it via the sidewalk, on the northern side of ‘Unter den Linden’, or from the west. All of those selfies probably looked unconventional because visitors had to shoot them from very close to the Gate. But at least they got there.

Appointment in the ‘Washing Machine’

The Libya Conference participants were expected at the Chancellery after 2:00 p.m.. Heretics in Berlin call the building ‘the washing machine’ because it looks like one from the side. Several protests took place about a block away from Mrs. Merkel’s office and residence. Apart from guarding the Presidents, Prime Ministers, the Chancellor and the ministers, police had to keep the protesters under control.

Algerians who demonstrated against their President were among them, and Afghans who dislike Turkey’s President Erdoğan. Turkish Erdoğan fans were there too. Some Libyans on site supported Prime Minister Fayez al-Sarraj, others wanted General Khalifa Haftar to rule their country. A bit further towards the Reichstag, some seven Nazis protested against the German constitution.

At around 2:20 p.m., several convoys raced by on the other side of the river. President Erdoğan had quite an entourage of police vehicles. He was driven in an armored Mercedes Maybach without number plates. So was his Foreign Minister Mevlüt Çavuşoğlu. Usually, nobody is allowed to drive, or be driven, without number plates, not even Mrs. Merkel.

Russia’s President Vladimir Putin had his armored limousine flown in from Moscow. It is an Aurus Senat with weird proportions. It actually looks as if someone had paired an old Audi A8 with a 1940s Rolls Royce, but forgot to take the whole thing out of the oven on time.

In the meantime, a police helicopter stood in the air for hours. It hardly ever moved. On the Spree river, Berlin’s water police was busy keeping any traffic off the water. This applied to a long stretch around the Chancellery.

The thousands of police officers all over the place came in from Baden-Württemberg, Sachsen-Anhalt, Bavaria and other provinces. The federal police and Berlin’s police were extremely busy as well. Around the ‘Washing Machine’, police on horses were seen, in spite of the fact that they do not have any heating, just like the motor bikes many cops used to race through the government quarter.