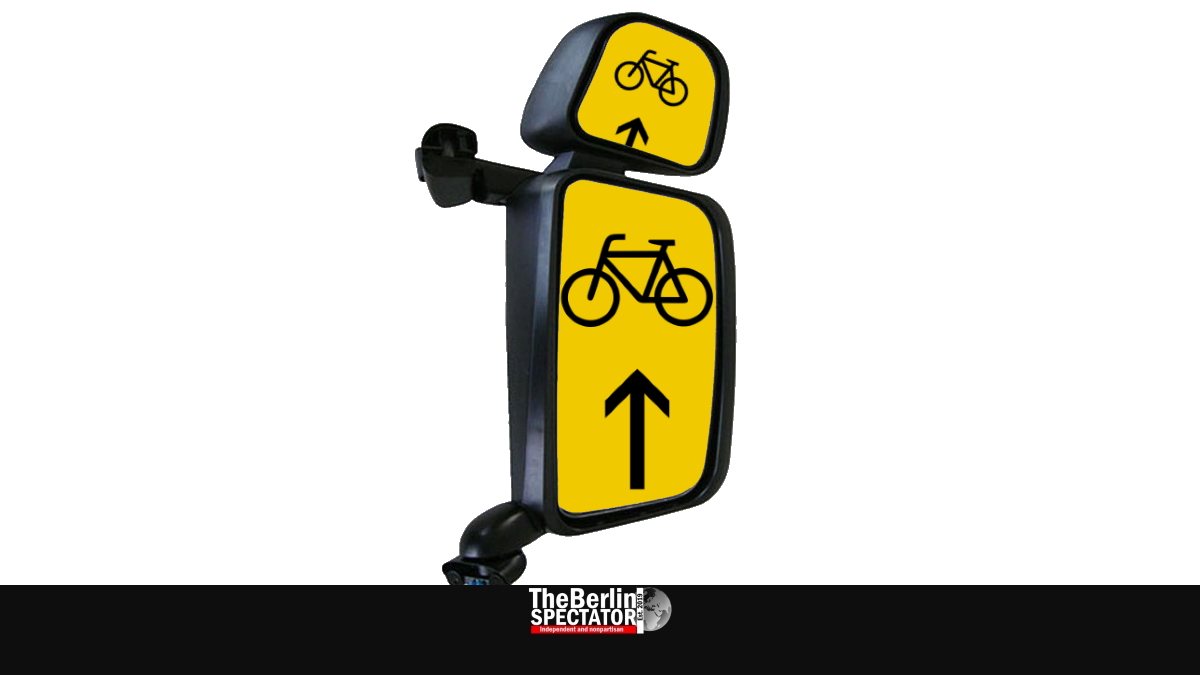 In 2020, two bicyclists have been killed in accidents in Berlin so far. In both cases, the vehicles that crushed the victims made right turns. Knowledge and a technical add-on can save lives.

Yesterday, on Sunday, January 19th, 2020, a woman on a bicycle was on ‘Gross-Berliner Damm’ in Berlin’s Johannistal district. While she wanted to continue straight ahead, a large bus owned by the BVG was getting ready for a right turn. At 12:20 p.m., the driver turned into ‘Pilotenstrasse’ and did not see the cyclist. The woman was overrun by the bus.

One Accident of Many

In the afternoon, the Berlin police department sent out a statement saying the victim had died at the scene. The bus driver suffered a shock and was treated. Since the bicyclist’s next of kin had not been reached, the age of the victim was not immediately released. Later they said she had been 35. Forty police officers, medics and fire fighters were on site. An investigation into the accident is ongoing.

Unfortunately, this terrible, deadly accident is one of many of the same kind and the second one this year, in Berlin alone. Bicyclists get killed by trucks making right turns all the time. The reason is that, in many cases, the drivers of those huge vehicles simply cannot see the cyclists. Especially when those bikes approach the intersection at high speed, they disappear in the truck driver’s blind angle.

Just eleven days earlier, on January 9th, 2020, another bicyclist approached the infamous ‘Kottbusser Tor’ square on ‘Kottbusser Damm’. She was going to cross ‘Skalitzer Strasse’ and continue straight. A heavy truck at the same intersection made a right turn. The driver did not see the lady on her bike. She ended up under the truck and died on the spot.

Fire fighters had to lift the truck in order to get the body out. At the scene, the truck driver and a witness needed to be treated by psychologists while police started investigating. The intersection was blocked to traffic for several hours.

Exactly the same deadly tragedy had happened at the very same spot two years earlier, in February of 2018. And it happens at other intersections on a regular basis. In 2019, 40 people were killed in accidents on the streets of Berlin. Six of them were bicyclists. In about half the cases, the cyclists themselves are to blame, according to statistics. In the other cases, drivers of trucks, buses or smaller vehicles are.

Experts believe the number of deadly right turn accidents of this kind could be decreased substantially if warning systems were installed on trucks and buses. Those would alert the driver when there is a bicyclist on either side of his vehicle, one he or she cannot see or one he or she overlooked.

A Matter of Life and Death

The other aspect is knowledge on both sides. The fact that truck drivers need to be extremely careful during right turns is obvious. Also they should remember bicyclists they may have been overtaking shortly before they reach the intersection at which they intend to turn right.

At the same time, bicyclists need to be aware of the issue with large vehicles which are making right turns and the dead angles they might disappear in. When a truck or bus is about to turn right, they may just want to wait, even though they might have the right of way. It is a matter of life and death.