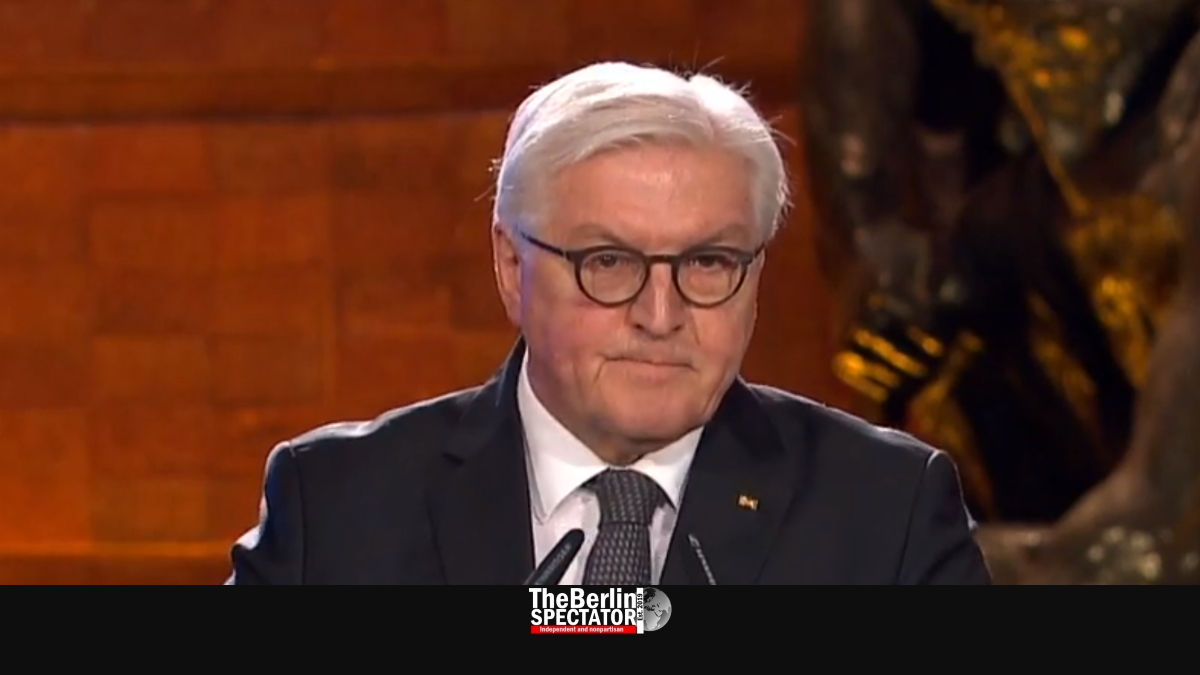 At Yad Vashem in Jerusalem, many world leaders and Holocaust survivors gathered to commemorate the 75th anniversary of the liberation of Auschwitz. Germany’s President Steinmeier held a moving speech.

On January 27th of 1945, the gates of hell had been opened in Auschwitz, Reuven Rivlin, the President of Israel, told the participants of the Holocaust Forum. The atrocities that were revealed to the Red Army troops had been absolutely incomprehensible. Rivlin quoted a Soviet soldier who wrote about his experience after the liberation. “The Earth is sighing with the atrocities”, the text read.

Millions of human beings, of his people, the Jews, had been slaughtered in the Holocaust. At the end of the day, the Allies had acted late, but their action had ended the murder. This was something that could not be taken for granted. “What would have happened in a world in which the Allies would not have united?” This was a rhetoric question President Rivlin asked.

“We understand that if we do not rise up to antisemitism, then history can be repeated. Antisemitism does not stop with Jews”, Rivlin stated. Racism was a malignant disease. He said the state of Israel was not a compensation for the Holocaust. It was established because it was “our homeland. We came here after two thousand years of exile. Israel is a strong democracy which wants partnership.”

Antisemitism was now looming in the world again, in a different shape, Rivlin said. It was a chronic disease. “Antisemitism has not changed, but we have”, he told the many participants. Israel was the homeland of the Jewish people, and it would always be responsible for the protection of Jews in other countries too.

Israel’s Prime Minister Benjamin Netanyahu thanked the guests for coming. “Your presence honors the memories of the 6 million victims of the Holocaust”, he told them. “Israel is eternally grateful for the sacrifice the Allies made. Without that sacrifice, there would be no survivors today”, Netanyahu stated. Auschwitz was “the ultimate symbol of evil” and had shown that humanity could “sink into horrific depths.”

The Prime Minister told the guests assembled at Yad Vashem, they were leaders from nations who had understood that antisemitism hurt their societies as well. He also thanked U.S. President Trump and Vice President Pence for their support against Iran. “They threaten the peace and security of the entire world”, Netanyahu said about the leadership in Teheran. “Israel will do whatever it takes to defend its people.”

Putin: ‘Most Shameful Part of History’

Russia’s President Putin said at the commemoration event, reading the reports of the Soviet soldiers who had been part of the liberation of Auschwitz was unbearable. The crimes perpetrated by Nazis had been carefully planned and “one of the blackest and most shameful part of history.”

Putin mentioned terrible massacres committed by the Nazis on the territory of the former Soviet Union, including the one in Babi Yar near Kiev, where the Germans murdered more than 33,000 Jewish children, women and men within 36 hours in late September of 1941, and the millions of Jews from several former Soviet republics who had been killed. In order to defeat the Nazis, the Soviet Union had paid a high price. Twenty-seven million Soviets had died.

Mike Pence said the solemn obligation was remembrance, and never to allow the victims of the Holocaust to be forgotten. “Today we pause to remember what President Donald Trump called ‘the dark stain on human history'”, Pence said at Yad Vashem.

“One cannot walk the grounds of Auschwitz without being overcome with emotion”, Pence stated. He and his wife had recently made that experience, at the memorial site. Pence talked about the 2 million American soldiers who left home during World War II and suffered a huge number of casualties. Today, antisemitism needed to be fought. “Never again”, he said. And he called for a hard stance against Iran.

France’s President Macron said antisemitism was not just a problem to Jews, but mainly to non-Jews. The Prince of Wales, who represented the United Kingdom, told the participants of the event in Jerusalem, the world needed to commit to ensuring that the stories of the Holocaust survivors lived on. “Their experience must always educate, guide and warn us”, Price Charles said.

Frank-Walter Steinmeier, the President of the Federal Republic of Germany, which is the successor country to Nazi Germany, spoke at the Holocaust Forum as well. He cited a prayer in Hebrew and said the perpetrators had been Germans. “The worst crime in the history of humanity was committed by my countrymen”, he said. “The war originated from my country. Seventy-five years later, I stand before you, laden with the historical burden of guilt.

Steinmeier: ‘Germany’s Responsibility Does Not Expire’

“At the same time my heart is filled with gratitude for the survivors and the new trust given to us, gratitude for flourishing Jewish life in Germany today”, President Steinmeier continued. The eternal flame at Yad Vashem would not fade, and Germany’s responsibility would not expire. “By this, dear friends, you should measure us”, Steinmeier said in front of his hosts, colleagues and the Holocaust survivors who took part.

“I wish I could say that our remembrance would make us immune to evil.” He mentioned today’s antisemitism in Germany and said he could not say the Germans had learned their lesson for good as long as Jewish children were spat at on school yards, or when only a massive door had saved praying Jews in the city Halle.

There could not be an end to remembrance, Steinmeier said. “We fight antisemitism, we resist to the poison that is nationalism, and we stand with Israel. Today we join together to say no to antisemitism, no to Auschwitz.” Steinmeier held is speech in English.

Knobloch: ‘Where is the Outcry?’

As many as forty-seven heads of government, heads of state and other representatives from foreign countries took part in the World Holocaust Forum on Thursday. Seldomly, this many Presidents and Prime Ministers have gathered anywhere.

Back in Germany, Bavaria’s First Minister Markus Söder said there was not enough protection against hatred spread online. He demanded stricter laws. During a public discussion recorded for BR television at Ohel Jakob Synagogue in Munich, Söder announced Bavaria would enforce police protection for synagogues in his federal state again.

In the same television broadcast, Charlotte Knobloch, the President of the Jewish religious community in Munich and Upper Bavaria, said hatred against Jews in Germany had reached a new dimension which partially originated from the center of society, but there was no outcry within the latter. Especially for children, antisemitism was hard to comprehend.

The Israeli Ambassador to Germany, Jeremy Issacharoff said it was of central importance to commemorate the 75th anniversary of the liberation of Auschwitz. “We will never be able to free ourselves from the memories of the horrors of concentration camps or the Holocaust”, Issacharoff stated. “We need to remember so that history can bring a better future for Israel, the Jews, Germany and all of humanity.”