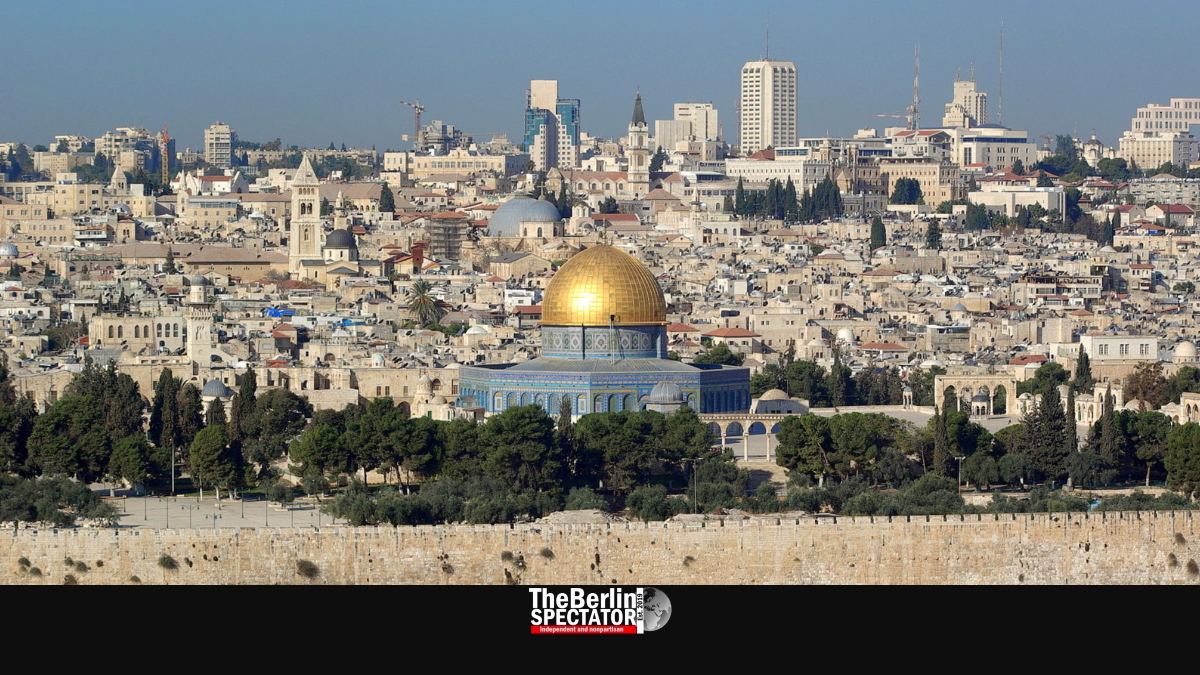 The new peace plan for the Middle East may include parts of former initiatives, and it may have been introduced by a controversial U.S. President. But it takes the right direction anyway.

In 1937, the Peel Commission recommended a partition of the land both Jews and Arabs wanted to live on. It was the birth of an idea called Two-State-Solution. This plan would have given the Arabs 80 percent of the land, the Jews would have gotten 20 percent. They agreed to it, while the Arabs rejected the plan.

In 1947, the freshly founded United Nations Organization also said there should be two states. The Jews agreed again, while the Arabs rejected that plan too and attacked Israel the minute it was founded in 1948. The West Bank and East Jerusalem were occupied by Jordan.

Twenty years later, in 1967, Israel got attacked yet again, by its neighbors. During the Six-Day War it did not want, Israel not only fought back the attackers successfully, but also captured the Gaza Strip, all of Jerusalem and Judea and Samaria. Later, the Jewish state wanted to return the land, or give it to the Arabs in the region, who started calling themselves Palestinians at the time.

The only thing Israel wanted in return was peace and security. But the Arab attackers did not accept this kind of deal either. They said there would be no peace, no negotiations with Israel and they were not even going to recognize the state. Nor did they want a state next to Israel, but all of the land. Today’s Palestinian leaders are still taking this kind of approach.

Terror More Important than Own State

At Camp David, in the year 2000, the Arabs, also known as the Palestinians by then, could have had their own state. Prime Minister Barak and U.S. President Clinton gave them everything, including autonomy in East Jerusalem and most of Judea and Samaria. Their answer was what it always had been: No, because under that initiative Israel would still have existed.

The Palestinians started murdering Israeli citizens, including teenagers, in a terrible campaign of terror attacks. They wanted to hate and kill rather than having their own state next to Israel. The ‘Day of Fury’ Mahmoud Abbas announced as a reaction to Trump’s peace plan just now shows the Palestinian leaders have not learned anything since 1937.

When Israel left Gaza completely in 2005, the Palestinians turned it into a terror haven. Hamas is ruling it with brutality while attacking Israelis with missiles. In 2008, Mahmoud Abbas said no to yet another peace proposal which would have given the Arabs even more than Barak had already offered them eight years earlier.

Now he said no to Trump’s plan as well. It seems the only ‘peace plan’ he would accept would include getting rid of Israel altogether. Abbas stands for terror. He keeps on repeating he would always pay “martyrs”, meaning murderers of Jews. He spent millions on his palace instead of supporting poor Gazans who deserve a lot more than the nothing they are getting.

Still, the E.U. countries are rewarding him for his policies of terror, exploitation, for brainwashing his people by teaching even small children to hate and attack Jews on Palestinian TV (“Stab! Stab! Stab!”), by sending him millions. What he and Hamas really need is the kind of pressure Trump puts them under, or they will never recognize Israel, negotiate with the right intentions, create a Palestinian state next to Israel or stop their terror.

In a normal world, the main points of Trump’s plan would be convincing, even though it is him who came up with the initiative. The Jordan Valley, located between the border to Jordan and the Judea and Samaria region also referred to as West Bank, would be under Israeli sovereignty.

This is actually the only way. Without that region or the valley, Israel cannot defend itself against attacks from the east or north. Under the American plan, the Palestinians would receive more land than they are controlling now and 50 billion Dollars in aid, under certain conditions, including stopping terrorism. This is the kind of incentive and pressure combination which terror supporters like Abbas need. His answer to the offer speaks for itself.

The Palestinian state Abbas and the terror organization Hamas could create if they wanted to would include Gaza and areas in the West Bank. Those would be connected by roads and tunnels. Land swaps are being mentioned as an option, while most Israelis who live in the settlements would stay there. At the same time the predominantly Jewish state would stop constructing any new settlements in Judea and Samaria for four years.

In endless ‘expert’ discussions about the Middle East in Europe, “the settlements” keep on coming up as an alleged obstacle to peace and the reason for the Palestinian terror. If that is the case, how come the terror was already going on decades before there were any so-called “Jewish settlements”?

Trump’s plan also includes Jerusalem as Israel’s “undivided capital”, an option for the Arabs to create their capital to the north and east of the city, and access to the Temple Mount for everyone. What the Palestinian leadership and some European media are already slamming as a “list of Israeli talking points” is actually a fair approach considering the realities on the ground, the events of the past decades, the actual necessities for the Palestinian population in Gaza and the West Bank, and for Israel.

But unfortunately, this plan already got the usual “no” from the side which has rejected them all since 1937. Many Palestinians and the Israelis who live along the Gaza border are the ones who will be paying the price for more years of uncertainty, Arab missile attacks, so-called “peaceful protests” with fire kites and guns at the border fence, and Israel’s necessary reactions. The White House provided another solution, or at least a basis for new negotiations. But the “nos” still apply. No peace with Israel, no Palestinian state, no recognition of Israel, no end to the terror, no progress. It is another missed opportunity, and probably not the last one.