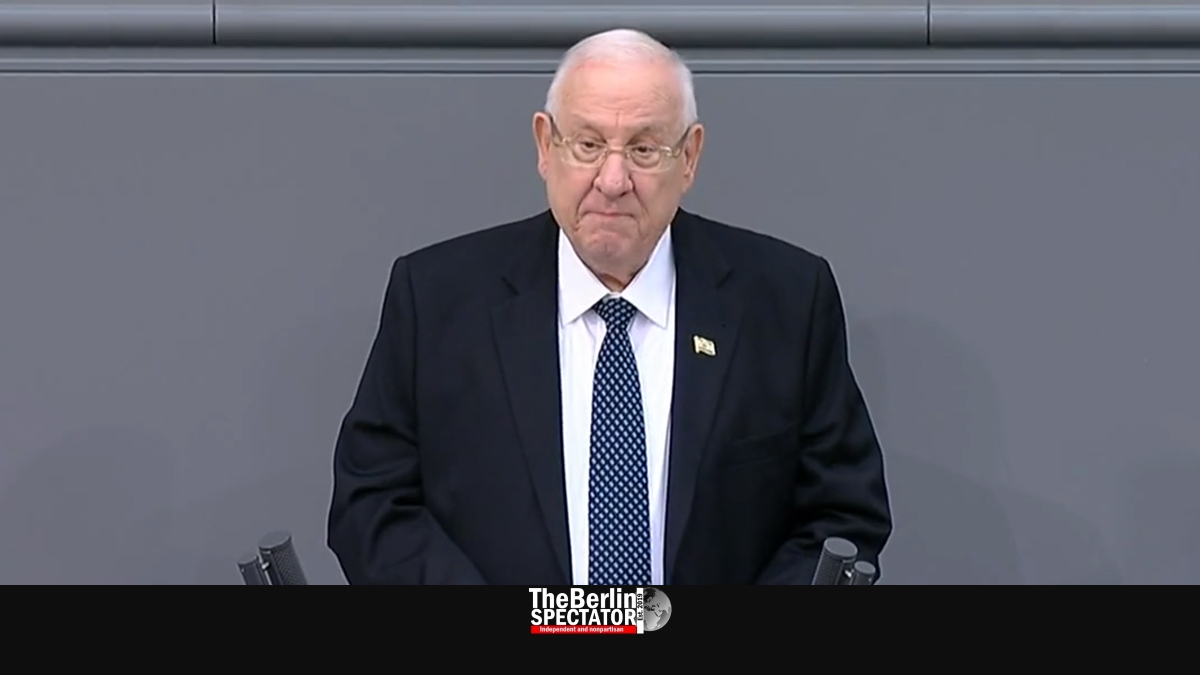 After the big events in Jerusalem and Poland, the Berlin Bundestag commemorated the victims of the Holocaust on Wednesday, 75 years after the liberation of Auschwitz-Birkenau. Israel’s President Reuven Rivlin and his German colleague Frank-Walter Steinmeier took part.

In Berlin, from where Adolf Hitler’s regime spread war and death just a few decades ago, the parliament of the Federal Republic of Germany commemorated the victims of the Holocaust today. The Bundestag’s President Wolfgang Schäuble said there was no salutary silence. “We need to talk about Auschwitz.”

‘We Stand With Israel’

“We need to make sure there is no room for stigmatizing people”, Schäuble said in front of hundreds of MPs, Chancellor Angela Merkel, President Reuven Rivlin, President Steinmeier, as well as Holocaust survivors, Rabbis and other guests who attended the commemoration event on the side ranks in the Berlin Reichstag, a building connected to Germany’s recent history too.

“Seventy-five years after Auschwitz, there still is antisemitism”, Schäuble said. “Jews have to fear for their lives.” Only a strong state and a courageous civil society could change this situation, he stated.

Steinmeier said the fact that an Israeli President walked the painful path of remembrance “with us” was a gift. “Your presence here is a sign of the strong ties between Germany and Israel”, he told Rivlin. “We will not forget and we stand with Israel”, Steinmeier stated.

The Shoah was part of Germany’s history, President Steinmeier stressed. “It is up to us to preserve the memory and to live up to our responsibility”, he said. “Many Germans of my generation could only make peace with their own country because it accounted for its history.”

Steinmeier also said new ways of remembrance needed to be found for a new generation. The tenets of history needed to be part of the self-conception of all Germans.

Steinmeier repeated some of the parts of his speech at Yad Vashem in Israel a few days ago, but this time he spoke in German. “I wish I could say we, the Germans, had understood. But how can I say so while hatred and agitation are spreading? How can I say so when Jews hide their Menorah before the heating technician comes along?”

‘Evil Ghosts from the Past‘

“How can I say so when an MP’s life is being threatened because of the color of his skin?”, Steinmeier continued. The evil ghosts from the past showed themselves in new garments today.” The President stated the country had not been prepared for those developments. “We have to pass this test. We owe it to both the victims and the survivors.”

President Reuven Rivlin explained how he had learned about the Holocaust as a child, how he had taken part in protests against any form of agreement between Israel and Germany on payments to victims many years ago. Today, the state which had spread those horrors back then was a “lighthouse of democracy”, Rivlin told the Bundestag and its guests.

There were racism and antisemitism all over Europe, the Israeli President said. It came from the right and the extreme left. “We are not standing right in front of a new Shoah, but we cannot ignore these developments. We have to stand up to the beginnings.” Jews were the usual target of attacks. “It starts with hatred towards Jews”, Rivlin stated, “and then it spreads.”

Rivlin thanked Germany for having fought antisemitism since Chancellor Adenauer had been in office. He said Israel and Germany were “true partners” and pleaded for persistence in the fight against this kind of hatred. “The entire world is looking at Germany”, Rivlin stated. “If Jews cannot live in safety here, they can’t do so anywhere.”

But Rivlin also brought along some advice and criticism. He said there was a difference of opinion on Iran. The Teheran regime wanted to annihilate Israel. That threat was not a theoretical, but an existential one. By saying so, Rivlin indirectly referred to Germany’s policy of trying to save the so-called ‘Iran Deal’ with the murderous terror regime in Teheran.

And he criticized the German government’s failure to officially declare Hezbollah a terror organization in its entirety.