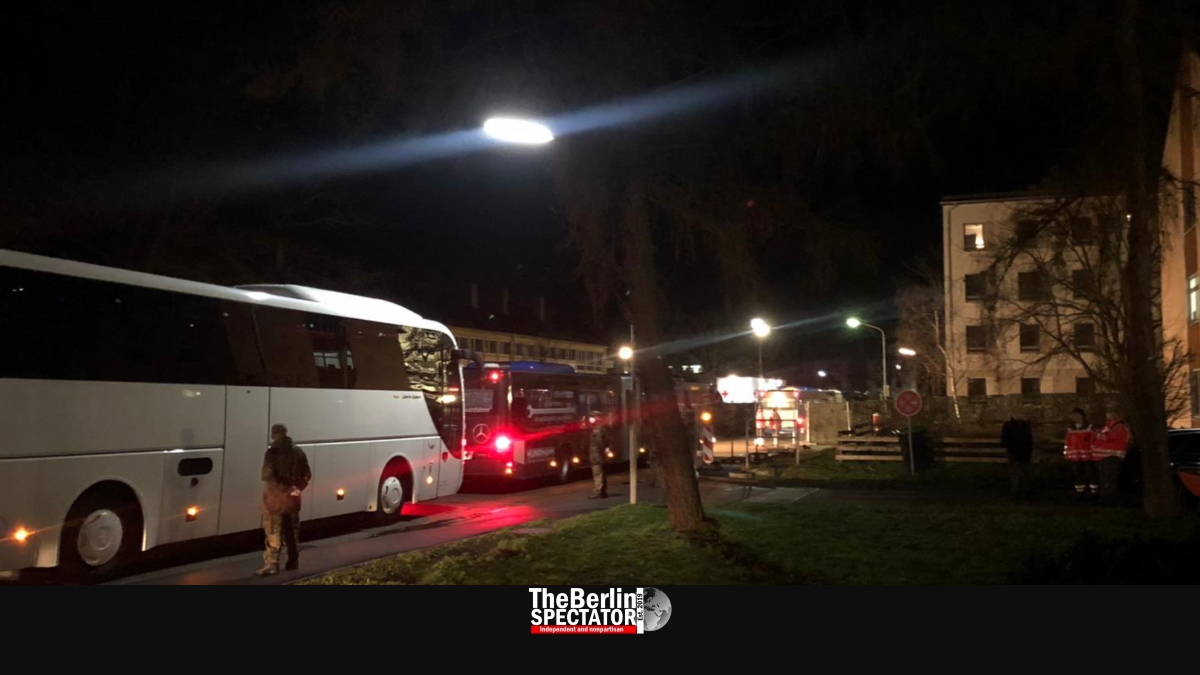 On Sunday morning, there were eight confirmed Coronavirus cases in Germany. Then two new cases had to be added to the list. They are among the evacuees from Wuhan.

During the evacuation of Germans and other nationals from the Chinese city of Wuhan, their numbers and nationalities kept on changing in media reports. On Saturday night, the Social Minister of the federal state of Hesse, Kai Klose, said 124 passengers had been on the Air Force plane that had picked them up, namely 100 Germans, 22 Chinese citizens, one American and one Romanian. In earlier reports, a Bulgarian had been mentioned. This seems to have been a mix-up.

Evacuees from Wuhan at Hospital

Most evacuees were taken to Germersheim, where they will be in quarantine for at least two weeks. Their buses were accompanied by police. The facility they are staying at has 128 rooms. It is part of an Air Force base. Eleven individuals were taken to a hospital in Frankfurt. In most cases, this had to do with medical conditions other than the Coronavirus. Later, the authorities in Germersheim said two evacuees from Wuhan were infected. Whether this increases the possibility that other evacuees may have caught the virus is unclear.

In Berlin, Germany’s Health Minister Jens Spahn said none of the evacuees had shown any symptoms when they had been picked up in Wuhan. Because symptoms or positive Coronavirus tests could show later during the incubation period, it had been the right decision to accommodate the evacuees at the Air Force base in Germersheim, Spahn said at a press conference. The minister also stated the Chinese and other foreign nationals who had been brought to Germany along with the Germans were spouses and children of German evacuees.

The evacuees in Germersheim are separated into four groups. In case there are Coronavirus infections in one group, the members of the other three will not be contagioned. That way they can get out of the quarantine after two weeks, unless the virus spread more than the authorities know at this stage, for instance during the flight from Wuhan.

Spahn thanked all helpers from the Air Force and the Red Cross for their efforts. And he said conspiracy theories about the Coronavirus were spreading in social media. Transparency was important to the government, Spahn stressed. The same applied to the authorities in the federal states. According to the minister, the situation is “dynamic”, meaning things are developing quickly.

Scientists believe the maximum incubation period for the Coronavirus is 14 days, but they are not sure at what point those affected are contagious. This aspect complicates the treatment of so-called contact persons who were close to infected individuals. The increasing number of Coronavirus cases in Bavaria shows how easily the virus can spread. All but one of the eight confirmed cases in that southern federal state work for one company. The eighth person is the child of one of the other seven. The latest Coronavirus case in Bavaria was announced by the Health Ministry in Munich on Saturday.

Most Suspected Cases Not Confirmed

In the past days, authorities in several federal states within Germany had mentioned several suspected cases, including in Berlin, Brandenburg, Bremen, Saxony-Anhalt and Thuringia. None of them were confirmed. In most cases those individuals were suffering from common colds. But one German citizen in Spain is infected. He is in quarantine there.

While the situation in Germany or any other country is not comparable to the circumstances in China at all, where some 15,000 people are infected and more than 300 have died, this week was a relative dramatic one. Last Sunday, the German authorities had said there was no reason to panic. The country was prepared for any Coronavirus cases. A day later, on Monday, the first case in Bavaria was confirmed. Three more followed. Now the number of infected in Bavaria stands at eight, for the moment. Two more are being treated at Frankfurt’s University Clinic. Those infected seem to be relatively well. Some of the patients did not have any symptoms.

The evacuation from Wuhan was quite a story itself. It took the German authorities days to prepare for the evacuees. Moscow first gave the German Air Force a landing permit for refueling in Moscow, but retracted it later, saying there were no capacities at the Russian capital’s main airport. Berlin government members believe that statement may have been a cheap excuse used to avoid any contact with a plane full of evacuees from Wuhan, who might be infected.