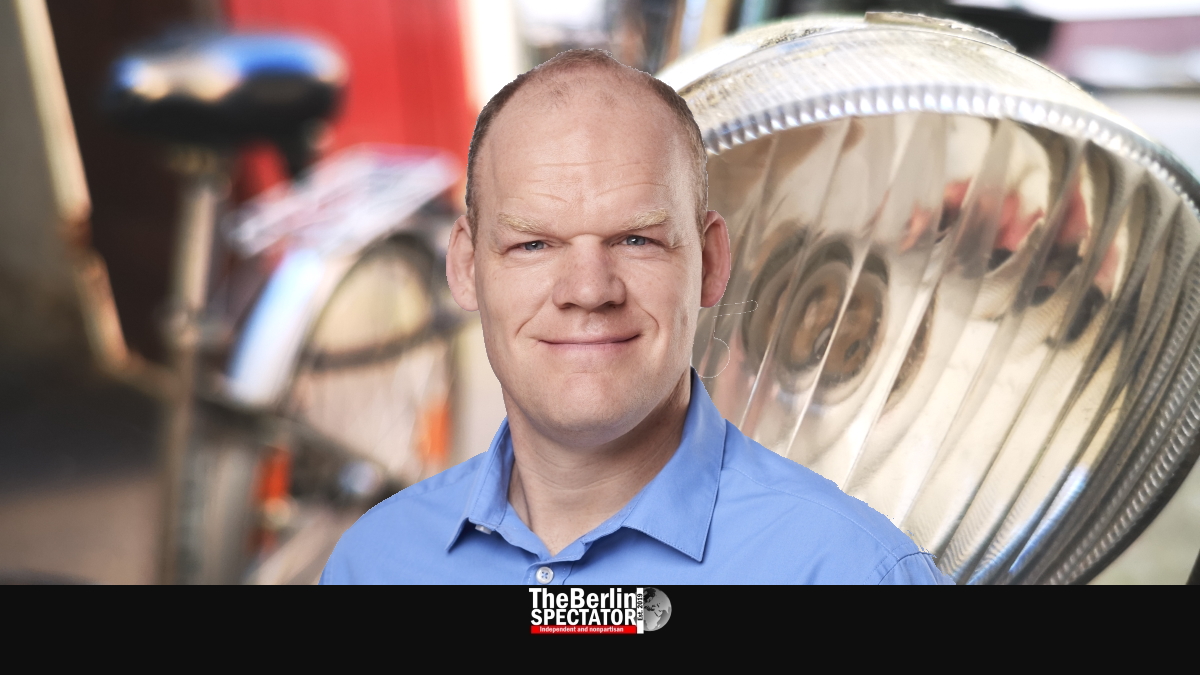 Bicycling is clean, healthy and fun. It takes people from A to B or C, and back to A. It helps them stay in shape and enjoy nature. In Germany’s big cities, bicycling also has its downsides. So far, most politicians do not give it the priority it deserves.

What are the challenges bicyclists face? What are the dangers? What are the latest bicycle trends? A few months ahead of this year’s ‘Velo Berlin’ trade fair, Imanuel Marcus spoke to Gunnar Fehlau, a professional bicyclist of the German ‘Pressedienst Fahrrad’.

The Berlin Spectator: There are about 75 million bicycles in Germany. Many of them are being moved regularly. At least one of them is yours. What kind of bike do you ride in everyday life and why?

Gunnar Fehlau: Since I live and work in the same house, I don’t commute every day. Everyday life is very varied for me, so I ride a folding bike, a cargo bike, a city bike to the train station or a round of racing bikes or gravel bikes during my lunch break.

The Berlin Spectator: There are so many types of bikes it is easy to lose track. There are city bikes, trekking bikes, touring bikes, racing bikes, BMX bikes, bonanza bikes, e-bikes, mountain bikes, transport bikes and Dutch bikes. In addition, there are always new trends. What trend is currently the strongest?

Gunnar Fehlau: I see three trends: The first is electrification. Every type of bike is also available in a motorized version. The second trend is individualization, meaning bikes are being custom-built. If there is a main trend, it is the gravel bike, a racing bike with wider tires and therefore universal suitability even for bad roads. You can ride it like a racing bike, but away from the big roads. Many people like that. I am a big fan of this type of bike.

The Berlin Spectator: Millions of extras are being offered for cyclists, including airbag helmets. You demonstrated one of them at the last ‘Velo Berlin’ trade fair. What extras do you just need to have these days?

Gunnar Fehlau: Assuming that the bike already has lights, mudguards and other conventional extras, I would say you need a good lock. By the way: I like folding number locks, as they are very handy and perfectly safe for short parking. You need a helmet, a waterproof bag and a multi tool. It should not only work well, but preferably have no sharp edges, to make sure it does not damage other items in the bag.

The Berlin Spectator: Cycling is sustainable, healthy and fun. But the joy is sometimes clouded. In Berlin, there modern and wide bike lanes, but also bicycle paths built in the 1970s, which are hardly wider than ribbon pasta. On top of it all, you are being shaken like a daiquiri on those. What about the bicycle infrastructure in Germany?

Gunnar Fehlau: This is a hot topic. First of all, I would say that it is better not to have a special infrastructure for cyclists at all than a bad one. Above all, “symbol infrastructure” is bad. It is mostly being ordered for public presentations, by politicians who are desperate for admiration, and it usually has no real benefit for the cyclist. Of course there is good infrastructure too. But there is too little. In cities, the space for cycling infrastructure does not fall from the sky, it has to be taken from somewhere else.

The Berlin Spectator: Trucks that make right turns are one of the biggest dangers for cyclists. Last month (January of 2020) alone, two bicyclists in Berlin died in such accidents. What do you think should be done to avert these and other dangers?

Some of our features. (This interview continues below.)

Gunnar Fehlau: I would like to differentiate between individual strategy and overall aspects. First of all: Regardless of the legal situation or the potential question of guilt, I have to do everything to ensure that I don’t end up under the truck. That means: Open your eyes! If there is a truck at the traffic light or if one comes rolling in from behind, then the highest alarm level applies. Get out of the danger zone quickly, for instance on the sidewalk. Overall, it cannot be accepted that the victim has to change his behavior while the perpetrator does nothing. I am firmly convinced that truck drivers do not want to run over cyclists. They are overwhelmed by traffic and poor visibility conditions. The necessary consequence is: Wait, look, drive slowly. Legislators are not responsible here to.

The Berlin Spectator: The cyclists themselves are another danger. In Berlin, cyclists are responsible for around half of all accidents they are involved in. What observations do you make regarding misconduct on the bike?

Gunnar Fehlau: There are more and more cyclists in the city. This leads to a responsibility for the individual and for all cyclists, which we also have to accept. First of all, this means that the bike must meet the legal requirements in terms of equipment and condition. As a cyclist, I need to abide by the rules too. Then we need a portion of common sense. That way, 99% of cases of this kind should be avoidable.

The Berlin Spectator: Bicycle theft is an aspect that annoys us. In some cities things have gotten so bad that you should insure your bike. Could this problem be solved technically?

Gunnar Fehlau: Theft is a hot topic and also a very emotional one because it keeps people from buying bikes and thus from cycling. Here too, a combination of a good lock, a clever locking strategy and a modern infrastructure is required. The latter is in the hands of cities, municipalities, landlords, employers and business owners. In the past 40 years, a strong advantage was given to the car.

The Berlin Spectator: How should the Germany of the near future look for you as a bicycle professional?

Gunnar Fehlau: The more people ride bicycles in the city, the better it will be. Every cyclist is one less driver. Every cyclist is visible, also as a voter. The turnaround in Germany will take place from bottom to top. Drive and get involved in associations and local politics and make the right choice!

The Berlin Spectator: What was the best bike tour you have ever participated in? What have you experienced and where? How far did you go?

Gunnar Fehlau: The best tour is always the next one. The main thing is to be on the go. I like to leave records, rankings and records to others.

The ‘Velo Berlin’ bicycle festival and trade fair is scheduled to take place on April 18th and 19th, 2020 at Tempelhof Airport.

The German version of this interview can be found here.