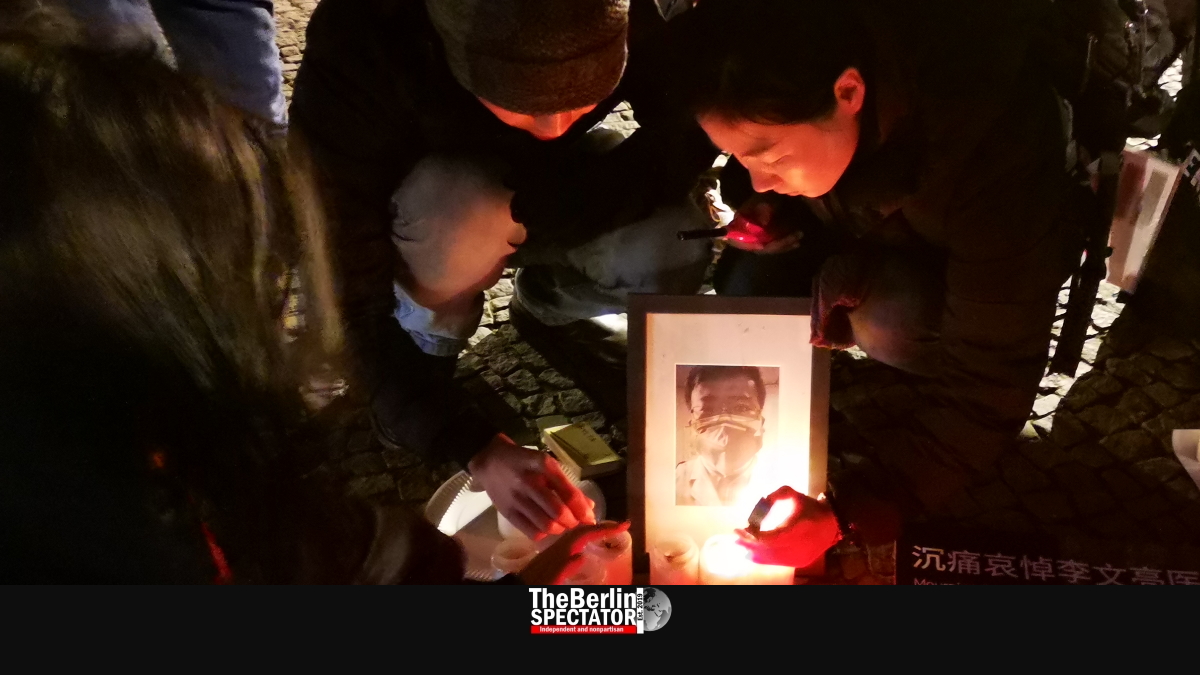 At Brandenburg Gate in Berlin, a group of Chinese citizens took part in a commemoration for doctor Li Wenliang, the whistleblower from Wuhan, on Sunday. They set up a makeshift shrine with photos and candles.

Some 25 Chinese expatriates living in Berlin participated in a remembrance event for Li Wenliang. The Wuhan doctor died on February 7th, after his infection was confirmed six days earlier. On December 30th, 2019, he had warned colleagues of the new virus that has killed hundreds by now.

The Chinese authorities accused him of spreading “false comments” and of “disturbing the social order.” Police investigated him, while the regime in Beijing was still trying to keep the spread of the Coronavirus a secret. By now, China is attempting to curb the virus by taking bold action. Scientists believe the spread would not have been quite as bad had the Chinese leadership become active when Li Wenliang rang the alarm bell.

A participant of the commemoration, which also was a protest against the way China handled the crisis at first, told The Berlin Spectator, he and his friends called the Coronavirus “the Chinese Chernobyl”, because the Soviet regime had tried to cover up a major crisis there.

He said the Chinese community in Berlin was split on the matter. While some believed the leadership in Beijing should not be criticized at any remembrance or protest event, others did. The protester also said he hoped he and the other participants would not get into trouble once they were back in China one day.

“We are here to hold a memorial for doctor Li Wenliang and others who died in this epidemic”, a statement distributed by the protesters said. They had defended freedom of speech. Telling the truth was not a crime, the statement read.

Apart from photos of the doctor, the Chinese nationals lit candles at Brandenburg Gate, and they added a text in Mandarin and English. “A friend of mine has passed away”, it said. “I will never forget you. May your trip be fine.” Li Wenliang was 34.