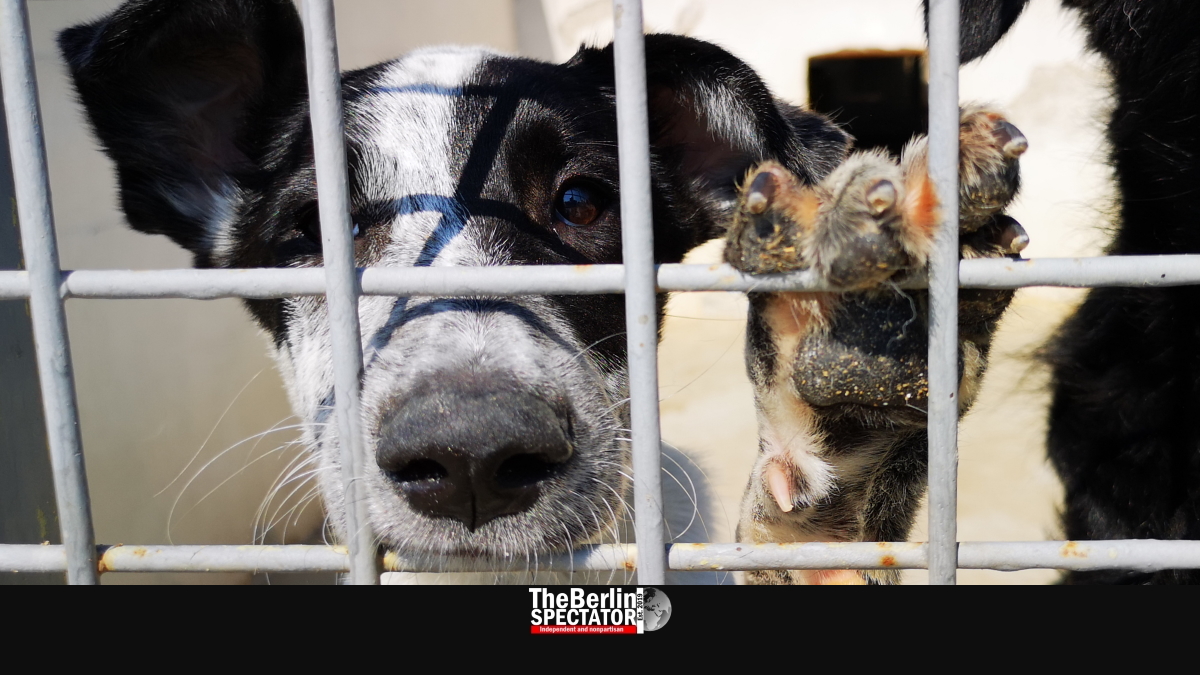 Animal Rescue Sofia runs a large dog kennel in Bulgaria. The organization accepts responsibility for stray dogs, abused, abandoned and ill ones, puppies and other animals. Here, a small team and some volunteers are on a mission impossible. As it turns out, love alone does not feed hungry dogs.

Eva from Paris is part of the team at the Animal Rescue Sofia (ARS) kennel located a few miles east of Sofia. “I came here a year ago”, she says. “I spoke to the team for an hour and told them I wanted to work with them. They gave me the job.” It was no coincidence.

The former weightlifter with the bright smile and countless tattoos on her face, arms and legs is a “dog whisperer”, according to her colleagues. With a lot of love and the right approach she manages to get along with the most aggressive dogs. She is the one who makes sure they make friends among the other dogs here.

Who Let the Dogs Out?

Since Eva, the energetic French lady, started working at ARS, she has not had a single vacation. Once the volunteers and some colleagues return from their summer holiday, she intends to leave for a few days to visit her family in Paris.

On an extremely hot Saturday in August, she was busy talking to her four-legged fosterlings. Who let the dogs out? Eva did. On this day, a bunch of them were allowed to run around and play on the premises.

Three years earlier, on another hot day, Stella, a Bulgarian ARS employee, was so glad because running water had just been installed in the kennel. Up until that moment, the team had been forced to work with water tanks. Over the years, Stella, Eva and many other team members and volunteers, including Nadia Stancheva, ARS’s CEO, and Svetlio Petrov, have kept the labor of love going, under rather difficult circumstances.

Money has been an issue all along. In fall, the financial situation at ARS was alarming after a few dogs needed surgery for 9000 Bulgarian Leva (5154 U.S. Dollars or 4283 Pounds Sterling). Donations are still badly needed. Animal Rescue Sofia (their donation page can be found here) needs to rely on them.

Stray dogs constantly come to ARS. At first, they are being checked and neutered. In the past five years, more than 12,000 dogs were treated accordingly. Some dogs, including abused ones, need surgery. Others will be directly accommodated in the many kennels on the premises. At this stage, 220 dogs live there.

While some dogs stay there for several years, others are being adopted. Since the beginning, ARS has found new homes for as many as 7000 dogs. Their new families live in Bulgaria and abroad. While many Bulgarians prefer to buy purebreds in spite of the ongoing stray dog crisis in their country, others do adopt animals at ARS. So do expatriates living in Bulgaria.

But hundreds of dogs have moved to Switzerland, Germany, France and other Western European countries, where they become part of loving families and individuals. Sending the dogs over costs money. But if the new foster parents do not pick up their new pets, ARS has to invest funds the organization does not have.

Fifteen years ago, Sofia, the Bulgarian capital, was full of stray dogs. They would roam the streets at night in packs, search the trash for food and leave their droppings all over the place. At times, they attacked and even killed pedestrians. At some point, Sofia Municipality took action.

According to animal protection organizations and media reports, dozens of stray dogs were caught every day and beaten to death. Activists did not just want to watch it happen. They founded little centers in which the dogs from the streets would be neutered and marked. At the same time, they tried to find human parents for them.

The Kennel in Dolni Bogrov

In 2008, after the Sofia Parliament finally passed the Animal Protection Act, the state adapted to the ‘castrate and return’ policy private organizations were already following. The stray dog population has since visibly decreased in Sofia’s city center, and to a certain extent in the outskirts.

One of the private organizations, Animal Rescue Sofia (ARS), which does its work with a lot of love, has grown a lot since it was founded in 2009. In 2013, ARS set up its large dog kennel in the village of Dolni Bogrov, where it purchased an industrial building with donations it had collected.

Especially the first years were difficult. A construction company finally made sure ARS got running water in 2016.

The shelter in Dolni Bogrov is not just for dogs. ARS has given a home to horses that were abused by their former owners. There are goats, pigs and even a mule. The organization wants to allow abused animals to live the rest of their lives in dignity.

Coming to the animal shelter will trigger a loud barking concert. There are separate kennels for doggies with a normal behavior. Some of them want to show the visitor how well behaved they are. They give them a good impression from the first moment since they might be hoping to be adopted.

Others bark like crazy, to protect themselves, just in case. This morning, one aggressive dog shows his teeth and jumps alarmingly high. Luckily he does not manage to jump over the fence. In the next two kennels, a blind dog and a few very old ones have their home. Volunteers come and walk them once in a while. The fenced kennels around this former industrial building have an inside and an outside part.

Behind the small administration building, which is also the storage shed, the area for horses, mules, donkeys, pigs and goats is located. Next to them, puppies have their refuge. They are so cute, everyone wants to adopt all of them at once, but few actually take one of them home.

Some of the tiny ones are obviously siblings, such as a bunch of beauties with white coats. The puppies rest in the cooler shade, but in order to greet the human visitors they come to the fence and eagerly lick as many hands as they can.

Families or individuals who want to adopt a dog from ARS should come to the premises, pick one (or be picked by one) and socialize with the doggy they want. Then they should leave without it and come back the next day, in order to play with the chosen one more and show their love. Also they need to answer questions, since the organization wants to make sure its dogs go to the right people.

People who can not adopt any dog but still want to help can do so by donating through the ARS website or on site. The kennel always needs dog food and other items.

Before any abused, abandoned or stray dog can be accommodated, 76 Euro (86 Dollars or 71 Pounds) need to be invested for the vaccinations it needs, the neutering, the blood count, tick infections tests as well as a dog passport. Feeding a dog for a month costs about 20 Euro (23 Dollars or 19 Pounds), on average. The costs for additional medical treatment need to be added.

In a country and a region in which many dogs are being abused as ‘living door bells’ on short chains, the ARS team gives unlimited amounts of love to the dogs and other animals they accommodate. But love alone does not fill stomachs.