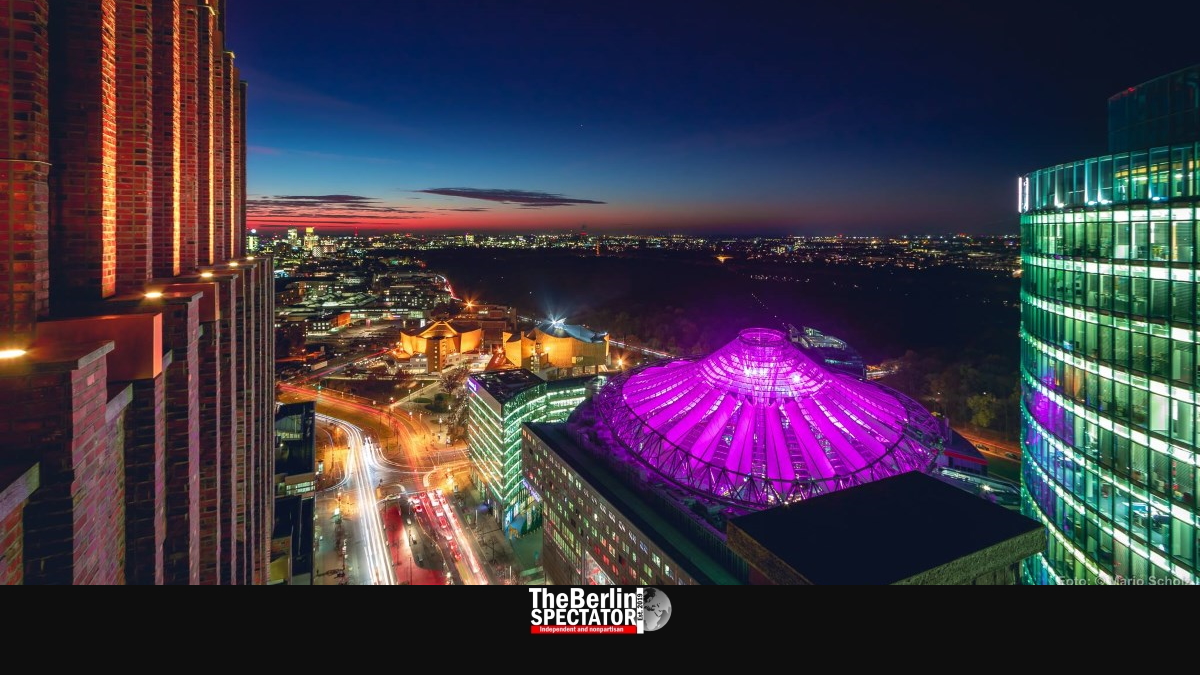 As we all know, Berlin is full of art and the people who create it, among them painters, actors, musicians, comedians and sculpturists. Did we mention photographers? No. But we are doing so right now.

No, this is not about people like you and me who point their smart phones at anything cool or fancy, but rather about the girl with the eye, the artist who composes his photos instead of just pointing and shooting. The kind of photographer capable of spreading fascination. Get the picture?

The shot at the very top of this page was taken by none other than Mario Scholz who climbed up the Kolhoff Tower at Postdamer Platz. He knew he would get a literally breathtaking view up there. The Berlin city lights alone are great. Add the evening sky in those colors and the view of Tiergarten park plus Mario’s skills, and you will have this kind of perfection.

All of these great expat photographers with their Nikons, Canons, and especially their skills, definitely came to the right place. Berlin provides great photo opportunities. This city has a lot to show, including its beauty, its chaos and its dirt, its history, as well as its people and its spirit. There are shots that only could have been taken in Berlin, out of all the places in the world. One of them is the photo above, by Andrew James Kirkwood.

And, no this is not the end of time. Looking at the master shot above could make people think its doomsday. Berlin’s Olympic Stadium, built by the Nazis in 1934 for the 1936 Olympic Games, and the even older Reuter heat and power station, located a few miles away, with its huge filtered smoke cloud, ended up on the same photograph. The photographer, Olaf Hofmann, says he does edit his shots in order to create the image he wants to create. His photo series ‘History’ contains truly fascinating black and white pictures of historic buildings in Berlin. Hofmann is also a painter.

Whoever looks at that photo of the Berliner Schloss by Maikel Maier will certainly not believe when he commenced shooting: “I discovered photography only three years ago and I’m trying to master the craft.” Well, what can we say? He already has. Maikel Maier is 32 years old and a paramedic. The shot above is simply unbelievable, as it creates a surreal atmosphere. The light reflects on that horseman statue and the sky is lit in a stunning way. Do all paramedics shoot that way? No. Take our word for it.

Anton Tal is a photographer, videographer and an Israeli expatriate in Berlin. This is actually an atypical shot of his, but a stunning one. Spandau‘s city hall can be identified in the center of the pic. He usually creates abstract photo compositions, including so-called wormholes. His far less conventional compositions can be checked out in a separate piece, entitled ‘Anton Tal: The Israeli Expat Who Reinvents Berlin’.

Lars Grundmann, our next photographer, seems to like experimental photography involving shapes, light and simplicity. He also posted some great shots taken at Tempelhof Field, in U-Bahn stations and elsewhere in Berlin. In Crete and Spain, he put both his Nikon D750 and his Fuji XT3 to the test. The results are brilliant. His Berlin night shot above makes this city look like Brooklyn, at least a little, and mysterious. We do not have the faintest clue how he managed to set up the lighting part, but like it a lot.

The nicer part of Berlin’s Kreuzberg quarter has a certain look and feel. With their countless different backgrounds, its inhabitants are very distinctive too. Parents with smaller children, such as the mother seen on the picture above, take their little ones to kindergartens and schools on bicycles. Elina Shorokhova, another expat photographer in Berlin, managed to take a perfect photo every single inch of which seems to be saying “Kreuzberg“. She fulfilled the task of showing the real Berlin, without the damned TV tower or the Gate, in her unconventional masterpiece.

Michael Schuchard calls himself a “hobby photographer”, but on his Facebook page ‘Schuchis Hobbyfotografie‘ he presents shots which look very professional and fascinating. Those include the Minna Todenhagen Bridge which crosses the Spree river between Berlin’s Oberschöneweide and Baumschulenweg  districts. The man turns reality into beauty.