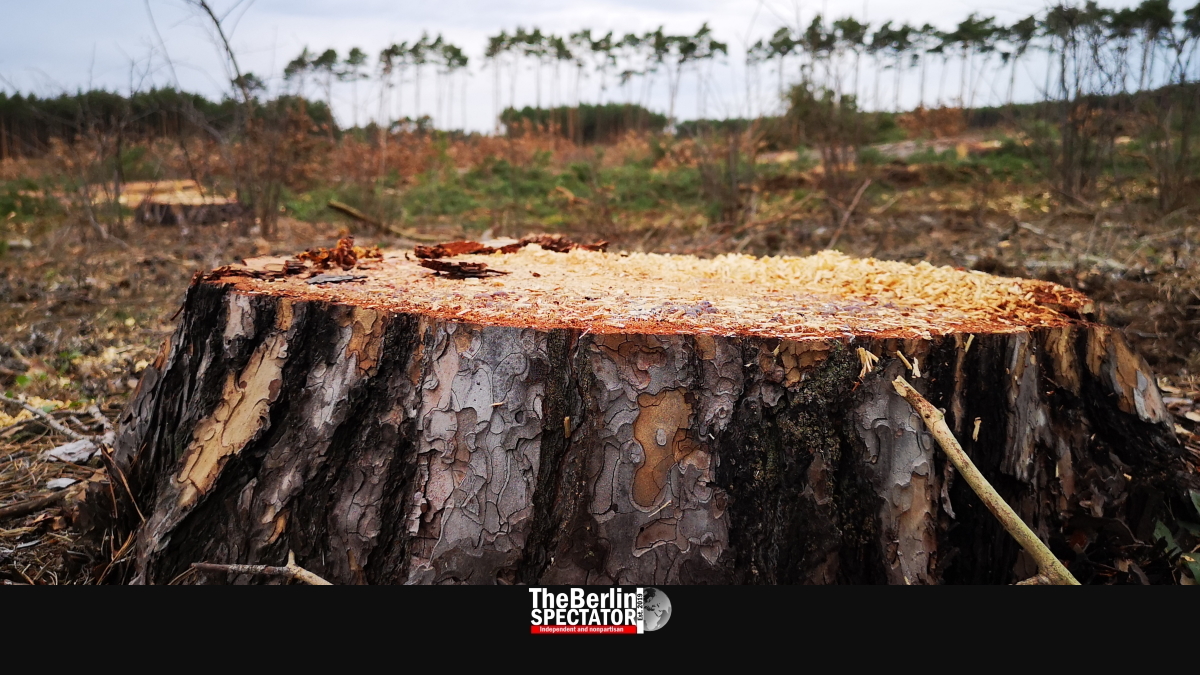 A court has halted the clearing of trees in the locality of Grünheide in Brandenburg province. It approved an urgent motion handed in by two environmental protection organizations.

The Freienbrink industrial park in the municipality of Grünheide in Brandenburg province is supposed to be enlarged substantially for a Tesla ‘Gigafactory’. The Californian electric vehicle manufacturer does not have a construction permit yet. But it obtained the permission to start getting rid of the trees on the land it intends to use.

On Thursday, a small army of felling machines entered the forest, once the State Office for the Environment had granted permission. They started cutting the trees and converting them into neatly trimmed pieces of wood. Tesla is in a hurry. In 16 months from now, the Americans want to manufacture their cars right there in Grünheide, on premises covered by thousands of trees.

Brandenburg’s authorities intend to help Tesla. The federal state’s government is so happy about the project that First Minister Dietmar Woidke even established a Tesla Task Force a few months ago. Its goal is to facilitate Tesla’s way through German bureaucracy and to accelerate processes. The fact that the felling permission came in early is probably an achievement reached with the Tesla Task Force’s help.

Once the cutting of trees commenced, environmental organizations started entering pleas for an immediate stop of the felling at the Administrative Court in Frankfurt/Oder, a town at the German-Polish border that carries the same name as the much larger Frankfurt in the federal state of Hesse.

Other Articles of Ours (This piece continues below.)

But the Green League and another organization failed to stop the tree cutting when the court rejected the motion. There was no objection to the permission granted by the State Office for the Environment, since all legal aspects had been considered and the pros and cons weighed, the court said..

After the verdict, the environmental organizations would not just stand on the sidelines and watch the Freienbrink forest vanish. They handed in a new motion at the High Administrative Court Berlin Brandenburg which said the “ambush-style” felling of the trees had negative consequences for the environment. Also Tesla was trying to accomplish facts that could not be reversed afterwards.

On Saturday, when the felling machines had already cut many trees, the High Administrative Court approved the motion, meaning the felling was stopped, all of a sudden. This latest ruling is valid until there is a decision on an open motion handed in by the Green League against the ‘Gigafactory’ and the felling.

Danger to Wildlife vs. Opportunity for Brandenburg

The environmentalists are saying Tesla’s construction plans posed a danger to the wildlife at the Freienbrink site and that the ramifications of the ‘Gigafactory’ project for the environment had not even been established. In Grünheide, several protests against the project took place in the past months.

On the other hand, many Brandenburgers, including First Minister Woidke and Grünheide’s Mayor Arne Christiani, support Tesla. They see a great opportunity for the region and the state, because of the jobs that will be created and due to the additional fiscal revenue they expect.

Starting in July of 2021, Tesla intends to manufacture 150,000 cars per year in Brandenburg. That number is supposed to be gradually increased to 500,000 per year.