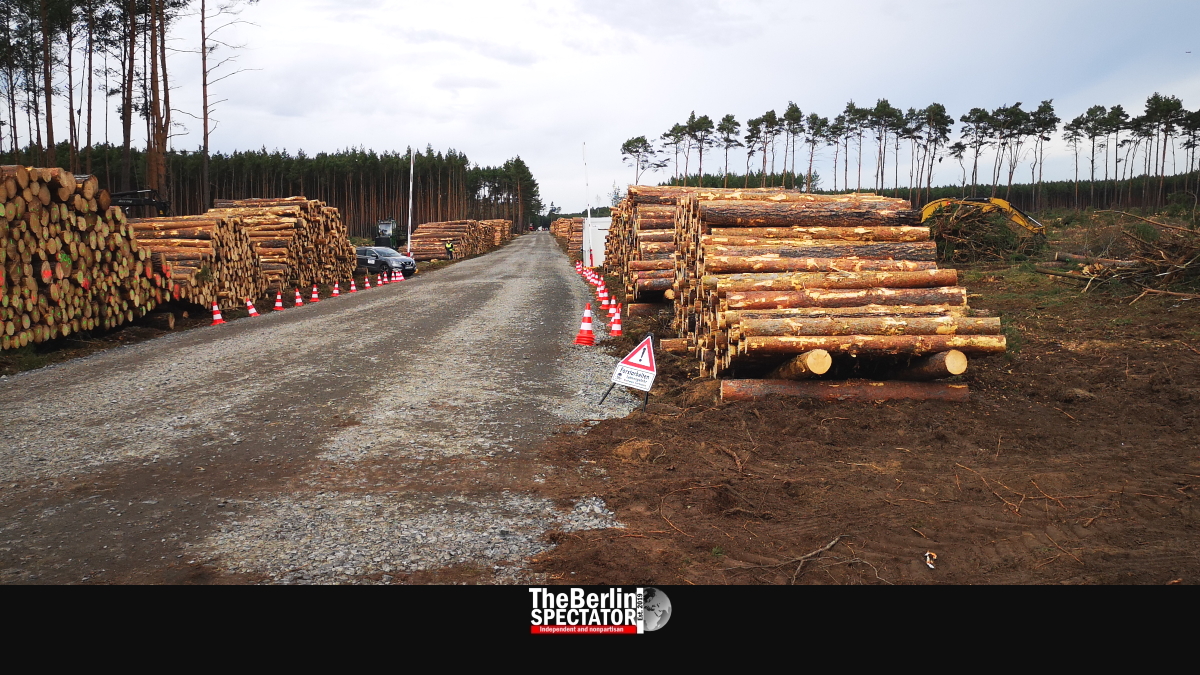 The Californian electric car manufacturer Tesla may continue cutting trees on the premises it intends to build a ‘Gigafactory’ on in Brandenburg province. On Thursday night, the Higher Administrative Court Berlin-Brandenburg took that decision.

With its European factory, Tesla will extend the Freienbrink industrial park located in the municipality of Grünheide, just outside Berlin in Brandenburg province. Last week it started cutting trees that are part of a pine tree plantation on the premises intended for the factory. When the ‘Green League’, an environmental organization, filed an urgent motion to stop the clearing of the trees, the same court approved it.

Had the court not stopped the clearing of the tree plantation temporarily, there would have been no trees left a day or two later, meaning a substantiated decision could not have been taken anymore. Now that the court had the time to look into all documents, it said “the legal requirements for a premature start of the factory’s construction are justifiably affirmed”.

There is no way for the ‘Green League’ or any other organization to stop the clearing of those pine trees anymore, meaning the court decision is final. The company Tesla commissioned to cut the trees will probably continue clearing the trees on Friday and finish the job quickly. According to German law, cutting those trees would not have been legal after March 1st because of Germany’s mandatory wildlife protection in spring.

The temporary wood cutting ban imposed on Tesla had lead to arguments within the environmentalist community. Even the Greens who are usually part of any fight for nature. including forests, were annoyed about the ‘Green League’ and its urgent motion. It was not necessary “to be against everything”, Berlin’s Green Commerce Senator Ramona Pop had said.

Lauterbach: Germany in Process of Preparing Measures Against…

Because of the battle for that pine tree plantation in Freienbrink, Brandenburg politicians were worried . They thought Tesla’s project might be jeopardized and feared the American company’s CEO Elon Musk might lose his patience and move the project to a different location in Europe. At the same time this latest court decision was expected.

For the clearing of a tree plantation of this size, companies would usually hire four to six workers with two tree cutting machines. Since Tesla must have expected issues with fundamentalist environmentalists and courts, it hired dozens of workers with many machines. Before the court stopped the clearing, they had already made a lot of headway.

Tesla has a rather ambitious schedule. The Californians intend to start constructing their ‘Gigafactory’ this summer. A year later, in summer of 2021, they intend to manufacture vehicles in Freienbrink, including the new Model Y. But Tesla’s management knew that permissions and other aspects in Germany can take time. This is what internal company documents suggest.

Up to 500,000 vehicles per year are supposed to be built in Brandenburg. German Politicians, including Commerce Secretary Peter Altmaier and Brandenburg’s First Minister Dietmar Woidke, support the ‘Gigafactory’, since they connect high hopes to the project.