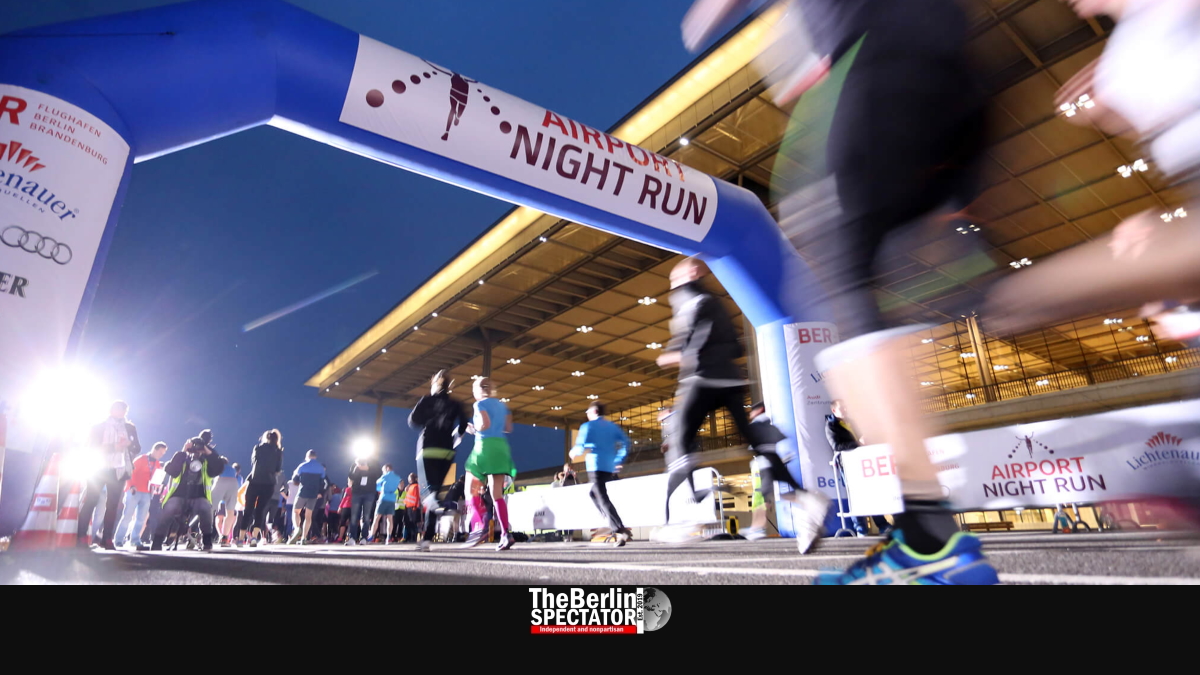 Update March 13th, 2020: This event was cancelled due to the Coronavirus crisis.

Runners, joggers and other fast Berliners still have the opportunity to register for the Airport Night Run, an event which combines racing with sightseeing. It takes place at Berlin’s new BER Airport.

The Airport Night Run comes with choices. Participants can win or lose and they can pick between the 10-kilometer (6.2 miles) or the half-marathon with a distance of 21 kilometers (13 miles). But there is something they cannot do, which is checking in their baggage.

Running on the Runway

Participating in the big Berlin Marathon is complicated and not for spontaneous runners. Those who are already registered for that one but can’t wait until September 27th should try the Airport Night Run. The same applies to those who missed the Marathon’s registration deadline which ended in 1978. They still have almost two months for their Airport Night Run registration.

The race commences on April 18th, 2020, behind Terminal 1 of BER Airport, right on the tarmac. From there it goes across the taxiway to the western end of the southern runway, along the runway itself and back to Terminal 1. Runners who take off without clearance will be disqualified.

It is the last time the Airport Night Run’s route includes the runway because BER Airport is scheduled to open on October 31st, 2020, and nobody should be run over by a Boeing 747, meaning that runway will be used for jet aircraft that take off at 300 km/h (186 mph). Their engines would literally blow away any marathon hot shot in their path.

Apart from individuals, companies and organizations can register. The winners will receive a “fastest company” award. The registration fee for single runners is 25 Euro for the 10-kilometer race or 35 Euro for the half-marathon. The good news is that registration is possible after the deadline on April 12th, but it will be more expensive.

The next good news is that every participant who finishes the Airport Night Run is to receive a medal. For a fee in the amount of 8 Euro, the person’s name will be engraved into it. And there are event shirts for 22.50 Euro. But first the races should be completed. Runners are obliged to finish the 10-kilometer race in 1 hour and 30 minutes, or the half-marathon in 3 hours and 15 minutes. Those who do not comply will not be flown to Guanatanamo, but forced to retire from the race.

In June of 2006, the first Airport Night Run was supposed to take place. Because the weather was far too hot, the actual race was cancelled, but it has taken place many times since. By now, some 6000 people take part every time. Those who do should not go there in their Airbus A380 because the tarmac will be congested.

All participants will be insured automatically. Like airplanes, they will have transponders built into their bib number. On top of it all, they may use showers at the finish point and toilets along the way. Drinks will be provided too. And everyone will get to see the beautiful new airport. Oh yes, the Airport Night Run is sightseeing and competing in one.

Detailed information about the registration and other aspects is being provided on the ‘Berlin läuft’ website.