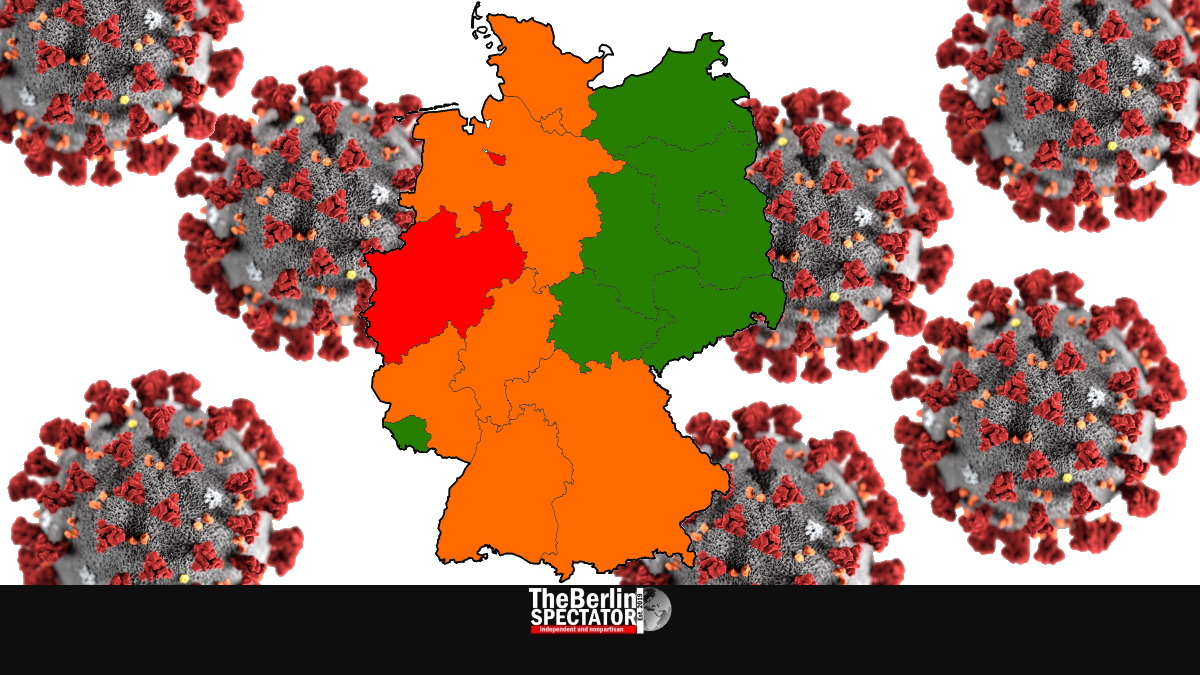 By Sunday morning, all western German provinces except for the tiny Saarland were affected by the Coronavirus. North Rhine-Westphalia has the largest infection cluster.

The second wave of Coronavirus infections in Germany started on February 25th, right after the number of cases had exploded in northern Italy. On Sunday morning, about 100 Germans were infected. On a daily basis, new cases are being added.

Schleswig-Holstein: One person from Henstedt-Ulzburg is infected. So is an individual from Lübeck who just returned from a business trip to Munich.

Hamburg: A doctor from the children’s ward at the University Clinic Eppendorf is infected. Many of his contact persons are in quarantine. The second case in Hamburg is an Iranian woman.

Lower Saxony: A man from Utze is infected. He had recently traveled to northern Italy.

Bremen: An infected woman is being treated at the Clinic Bremen Mitte. She recently returned from Iran.

North Rhine-Westphalia: In the largest and most affected federal state in Germany, more than 70 Coronavirus cases were reported by Sunday morning. Since February 25th, the number has been increasing rapidly. The first case identified in this federal state is a 47-year-old man from Gangelt who is still in critical condition. He had taken part in a big carnival celebration, where he infected others unknowingly. His wife, who is also infected, is a nursery school teacher. Four children from her kindergarten in Heinsberg county are infected. In this region, more than 1000 people are in quarantine, mostly in their homes.

In Mönchengladbach, a primary school teacher was tested positive on Saturday. For that reason, 70 third-graders and 30 colleagues from his school were quarantined and the school was closed for at least two weeks. Two women from Duisburg are infected as well. In Cologne, a woman and a man who had been in contact with carnival people in Heinsberg county are infected. A soldier from Cologne is an official Coronavirus case too. He is being treated at a hospital in Koblenz. In Bonn, a caretaker who works with primary school kids is infected. The school is closed, more than 180 kids are in quarantine. In addition, there are two cases in the town of Würselen, one in Aachen, and one in Lüdenscheid, where a teacher is infected.

Hesse: A woman from Giessen (‘Gießen’) and one of her flat mates are infected. These cases seem to be connected to a case from North Rhine-Westphalia. One person in Lahn-Dill county and one from Hochtaunus county are infected as well. New cases in Hesse were reported from Gross Gerau (‘Groß-Gerau’) county, where one woman is infected and from Frankfurt, where three men are among Germany’s newest Coronavirus cases. Three of those new cases are connected to the one in Lahn-Dill county. The third infected man in Frankfurt had been in Italy.

Rhineland-Palatinate: There are three cases in this province. In the case of a soldier in Koblenz it is unclear whether he is the individual from Cologne who was listed above. Two men in Kaiserslautern are infected too. One was in Iran, the other at the carnival in Gangelt.

Baden-Württemberg: New Coronavirus cases from Karlsruhe, Freiburg, Ludwigsburg and Emmendingen were reported. The total number of infections in this federal state is reportedly 15. The case from Karlsruhe is connected to Nuremberg in Bavaria, where the patient’s family is infected too.

Bavaria: This was the federal state in which the first German Coronavirus patient was confirmed positive on January 27th. While that first wave is over, a second one is developing. At this stage, there are four confirmed cases in Bavaria.

In Berlin and the rest of eastern Germany, where no case has been confirmed since the Corona crisis commenced, the health authorities and hospitals are prepared. The German capital’s Charité hospitals and the state-owned hospital company Vivantes combined have about 1800 beds for patients who need to be isolated.

The emergency isolation ward with 20 beds at the Charité’s Virchov Clinic is not included here. That one is reserved for far more dangerous illnesses such as Ebola, or victims of attacks with chemical or biological weapons.