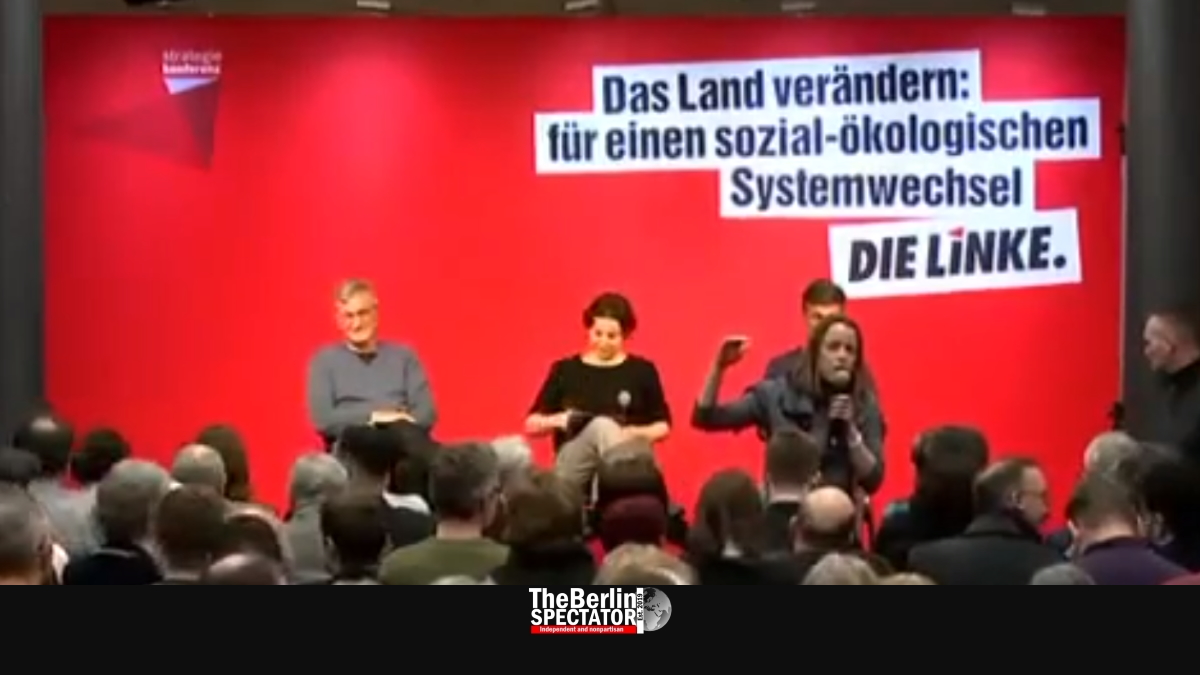 A video of an event the German left-wing party ‘Die Linke’ (‘The Left’) organized last weekend led to a political scandal. Bernd Riexinger, one of the two party’s leaders, is part of it.

At its ‘Strategy Congress’ last weekend in Kassel, ‘Die Linke’ discussed politics and its own role in Germany. On a video recorded at the event, one participant, a woman, talks about a revolution, sustainable energy and the mobility of the future, but also about shooting rich citizens.

“An energy transition is necessary after a revolution as well. Once we have shot the one percent of the rich, we will still want to heat our homes and travel.” The recording shows that nobody stopped her at this point. The woman referred to as Sandra even got some applause.

A bit later on the video, Bernd Riexinger reacts: “We are not shooting them, but we will make them do some useful work”, he casually says, instead of ripping the woman’s statement apart, or at least criticizing it. Only when the scandal broke on Tuesday, he sort of apologized.

On Twitter he said even though the woman’s statement had been “quoted out of context”, it was “unacceptable”. He said he regretted not having rejected the statement unambiguously. It was a semi-apology.

‘The Left’ and the GDR

With these kinds of statements and reactions, ‘Die Linke’ seems to be confirming what other parties accuse them of on a regular basis, which is not really being democratic, at least in part, and wanting to change the system back to what it was in the GDR.

Just days before the video was recorded, another accusation towards ‘Die Linke’ seemed to be confirmed, when the party’s other leader, Katja Kipping, refused to call the GDR a state in which injustice reigned, in a popular television talk show. In German, the noun ‘Unrechtsstaat’ (‘state of injustice’) is being used in this context.

The scandal comes at a bad moment for ‘Die Linke’. On Wednesday, one of its prominent and far more moderate members, Bodo Ramelow, wants to be elected First Minister in Thuringia, a few weeks after a scandal of a very different kind led to a political crisis in Germany that is being overshadowed by the Coronavirus at this stage.

Ramelow was one of those who harshly criticized Riexinger. “Anyone who wants to shoot people and raves about a revolution by force has nothing in common with my values”, he said. “Such a statement at a conference of my party is unacceptable and should never have been passed over with a smile.”

Slashing criticism came from virtually all other major parties in Germany. The CSU’s party secretary Markus Blume said Riexinger needed to step down. Because of the scope of this scandal and the damage inflicted to ‘Die Linke’, a step of that kind cannot be ruled out at this stage. But, to some, even a resignation would not clarify the question what ‘Die Linke’ actually wants.