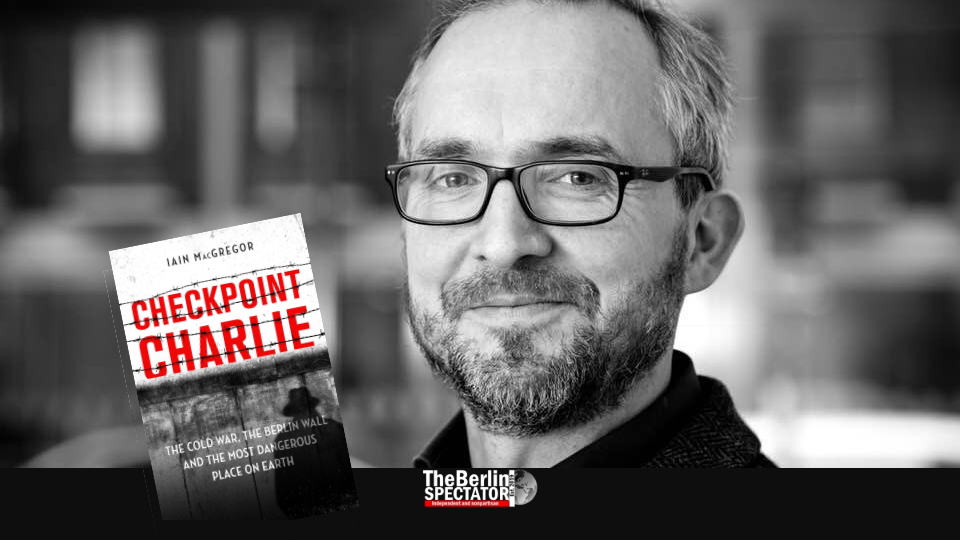 Along with Brandenburg Gate, Checkpoint Charlie symbolized the Cold War when it was going on. And it does today, more than 30 years after the fall of the Berlin Wall. ‘Checkpoint Charlie’ is also the title of Iain MacGregor’s new book.

The United States confronted the USSR at Checkpoint Charlie. In 1961, East Germany committed a billion Dollars to the creation of the Berlin Wall, an eleven-foot-high barrier that consisted of seventy-nine miles of fencing, 300 watchtowers, 250 guard dog runs, twenty bunkers, and was operated around the clock by guards who shot to kill.

In 1989, the East German leadership buckled in the face of a civil revolt that culminated in half a million East Berliners demanding an end to the ban on free movement. The world’s media flocked to capture the moment which, perhaps more than any other, signaled the end of the Cold War. Checkpoint Charlie had been the epicenter of global conflict for nearly three decades.

In his book ‘Checkpoint Charlie’, Iain MacGregor captures the mistrust, oppression, paranoia and fear that gripped the world throughout this period. Checkpoint Charlie is about the nerve-wracking confrontation between the West and USSR, highlighting such important global figures as Eisenhower, Stalin, JFK, Khrushchev, Mao Zedung, Nixon, Reagan, and other politicians of the period.

He also includes never-before-heard interviews with the men who built and dismantled the Berlin Wall, children who crossed it, relatives and friends who lost loved ones trying to escape over it, military policemen and soldiers who guarded the checkpoints, CIA, MI6, and Stasi operatives who oversaw operations across its borders, politicians whose ambitions shaped it and many more whose living memories contributed to the full story of Checkpoint Charlie.

The Berlin Spectator: What is your personal connection to Berlin?

Iain MacGregor: I have always loved history and chose to do a degree in Modern History, with my dissertation being on the Prague Spring of 1968. At home, I grew up around men who had served in the military. My father served in the Korean War and then onto the British Army of the Rhine in the mid-1950s. Along with my uncles who also served in the British Army, I thus was ‘educated’ in these areas, and my father told me many tales of enjoying his R’n’R in West Berlin. I have traveled tom Berlin many times and think it is one of the most significant cities of the 20th century. Though only a few hundred years old compared to London and Paris, this moment in world history it has witnessed and the destruction it has recovered from and how it’s population has survived, make it unique. In my eyes anyway. I would happily live there if I could.

The ‘Testicles of the West‘

The Berlin Spectator: Where does your fascination regarding Berlin’s recent history come from?

Iain MacGregor: I was lucky to be on a student exchange to Leningrad (now St. Petersburg) in 1981 which only further stoked my love of studying the history of the Cold War. I then went on camping trips with East German scouts a year later. The city of Berlin was a central part in all my discussions at university as the Wall and the Cold War were still very much a huge presence in our young lives. I vividly still recall watching events unfold in that summer and then autumn of 1989 as the Warsaw Pact countries began to disintegrate. My degree was completed in May 1990 and I immediately went on an inter-rail holiday through Europe, from Paris to Berlin and on to Warsaw, Prague and Budapest. I wanted to see the Eastern Bloc before it changed forever.

The Berlin Spectator: Why was Berlin “the testicles of the West”?

Iain MacGregor: The famous phrase coined by Nikita Khrushchev was as accurate as it was misogynistic! Geographically it was in a pivotal location, right in the heart of the battle lines of the Cold War, but crucially for the allies, still 70 miles behind the inner German Border Stalin decreed would be forcibly protected. The Four Powers Agreement which allowed the USA, Britain and France free access to their sectors in Berlin was always a hindrance to Stalin, and then to his successor Khruschev, to build a complete buffer zone to protect the USSR, but also to build a successful sovereign state of East Germany. Allied control of West Berlin gave NATO an early warning should the Soviets intend to attack the West, but also thwarted Stalin’s dream of a neutral and compliant Germany. That did not stop the Soviets over the next decade flexing their muscles and threaten to deny access to West Berlin through the agreed supply corridors via air, road and rail. Whenever they wished to apply pressure (i.e. ‘squeeze testicles’) then they would block or hamper these allied routes to keep West Berlin functioning. This obviously would then crank up tension in the allied sectors as to what was happening, and Washington, London and Paris would respond accordingly. The threat was always there.

‘Living for the Moment’ in Berlin

The Berlin Spectator: For your book ‘Checkpoint Charlie’, you spoke to many American and British soldiers who were deployed in West Berlin during the Cold War. What made their task so special?

Iain MacGregor: To a man and woman, they all loved their postings to this city, whatever sector they served in. West Berlin was different to every other city in Europe, if not the world due to its geographical and political positions. It was an exciting city to live and work in if you were in the Western sectors as you were surrounded by history, a grateful civilian population, abundantly supplied by the West, and armed to the teeth in case of attack. Added to this was the excitement of ‘living for the moment’ as they knew they were surrounded by the enemy, could be attacked at any moment and thus wanted to enjoy their down time as much as possible. Even Soviet military veterans I interviewed had only good things to say about their respective postings to East Berlin or the hinterland of the city itself. Compared to serving in other Eastern Bloc countries, or Russia for that matter, the average experience of the conscripted Soviet serviceman in East Germany was very good: better rations, better living conditions for their families, and their equipment and clothing was of a better standard, too.

The Berlin Spectator: There were probably more spies in Berlin than fries at McDonald’s and you gave them a lot of room in your book. Were they 007s? What kind of skills did they need?

Iain MacGregor: Berlin was a ‘city of spies’ for obvious reasons in terms of its location behind the Iron Curtain. All the various allied intelligence services were located there and ran their operations – or I should say, tried to run their operations into East Germany. It is agreed that this was very difficult to do such as the control the East Germany secret services – the Stasi – had across the country. It is estimated that including informants, one in four East Germans worked for the Stasi. Therefore it was nigh on impossible for the allies to embed and then expand a network of functioning spies to provide accurate information on the Warsaw Pact forces situated there, nor what was actually happening in the country. This would reflect how caught out many people were by the sudden collapse of the Berlin Wall and indeed the Iron Curtain. Saying that, the allied military units who were granted access to monitor the ‘enemy’ dispositions, and equipment they were using (and the Soviets were allowed reciprocal rights) still led a very ‘cat and mouse’ game with their opponents in trying to race around the countryside to discover what they were up to, and what new technology in terms of weaponry was coming online. I spent many enjoyable hours interviewing various veterans of the American, British and French ‘liaison’ teams, who belonged to their respective countries military intelligence wings, who served behind the lines and diced with death.

The Berlin Spectator: Out of all the personalities you came across during research, who impressed you most?

Iain MacGregor: Two people stood out, one American and one British. Sergeant Adolf Knackstedt of the U.S. Military Intelligence led an incredible life. He was born in the Bronx to German parents who would take him and his siblings back to Nazi Germany to serve the Reich in WWII. Adolf would then survive Russian occupation from 1945 to 1951 before taking advantage of his U.S. passport to return and enlist in the armed forces where he quickly transferred to intelligence and was assigned to be a ‘spook’ in West and East Berlin. From 1954 to 1963 he served with distinction as he witnessed the key moments in the birth of the Berlin Wall and its aftermath such as President John F. Kennedy arriving to give his famous ‘Ich bin ein Berliner!’ speech.

The second person actually bookends ‘Checkpoint Charlie’. Major General Sir Robert Corbett witnessed the Berlin Wall being built as a young British lieutenant in the Irish Guards. He was almost involved in an armed skirmish at the Inner German Border protecting a vital supply of rail goods on their way to the British sector in West Berlin in 1961. Fast forward to November 1989 and who is General Officer Commanding of the British sector, namely none other than Corbett. He had only served there less than a year when the Berlin Wall would fall. His actions on the night of November 9th, 1989, helped to prevent shooting by Soviet troops on West Berliners at the Soviet War Memorial by the Brandenburg Gate, a fact annually acknowledged by the Russians who send him presents as a message of ‘thank you’ for what they believe saved the lives of their troops. He would then shoulder the burden of ensuring Berlin remained peaceful as the GDR itself disintegrated and was the only British person to be invited by Chancellor Kohl to participate in the official ceremony that reunified Germany in 1990. He is an incredible man.