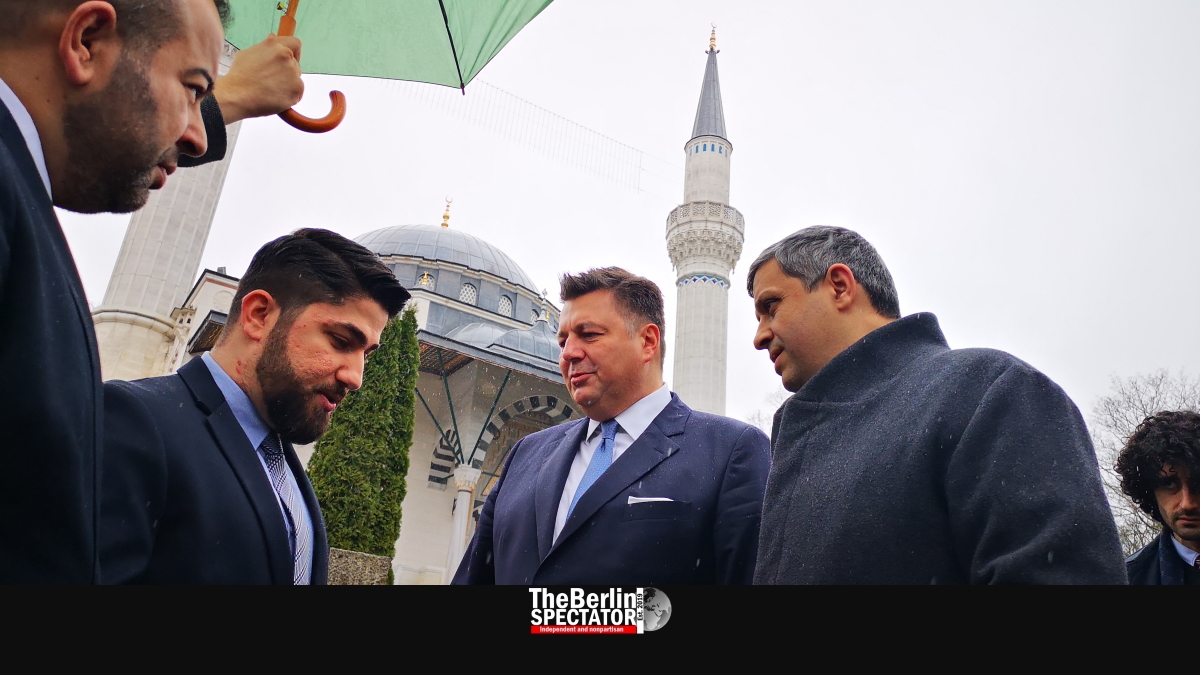 Berlin’s Interior Senator Andreas Geisel took part in a prayer service at Şehitlik Mosque in the German capital’s Tempelhof district on Friday. He said he wanted to show solidarity with the Muslim community.

Two weeks after the terror attack of Hanau, during which nine Germans of Turkish and Kurdish origin were murdered by a Nazi, Andreas Geisel and Raed Saleh, the floor leader of the Social Democratic Party (SPD) at Berlin’s House of Representatives, appeared at Şehitlik Mosque in order to take part in a prayer service.

Before entering, in pouring rain, Geisel stated the visit was about showing solidarity. After the prayer, he and Saleh were going to talk to the congregation’s chairman Yakup Ayar and other board members about racism directed towards Muslims and ways to fight it.

Senator Geisel also introduced a list of measures designed to protect Muslims and other minorities in Berlin. For instance, Berlin wants to add barriers and other structural elements around mosques and synagogues. Police officers, both in civilian clothes and in uniform, are supposed to contribute.

Berlin’s synagogues are already being protected by police guards 24 hours a day, because of the rising antisemitism in Germany and attacks of the past, such as the one in Halle where a Nazi tried to enter a synagogue on Yom Kippur and murdered two passers-by after failing to open the door.

In case of mosques and other establishments, the new protective measures could take place during certain times, e.g. before, during and after prayer services. Windows and doors could be made more secure. Senator Geisel has also said the Berlin police would show presence even more at large events.

In addition, Geisel wants to sensitize police officers in connection with anti-Muslim racism and start an internal education program. A project which is supposed to facilitate leaving far-right extremist organizations is on Geisel’s list as well. So are more help for victims of anti-Muslim hatred and the establishment of a point of registration at which hate crimes towards Muslims will be documented.

On Wednesday, a memorial service for the victims of the Hanau attack took place in Hanau itself. Chancellor Angela Merkel, President Frank-Walter Steinmeier and the First Minister of the federal state of Hesse, Volker Bouffiér, took part, along with 2000 other people, including the next of kin of the victims.

The Şehitlik Mosque in Berlin belongs to Turkish-Islamic Union for Religious Affairs which has been criticized sharply, for instance for cooperating with the Muslim Brotherhood, for allowing Ankara to exercise political influence on Turks in Germany and for rejecting an adaption of Muslims to European societies.