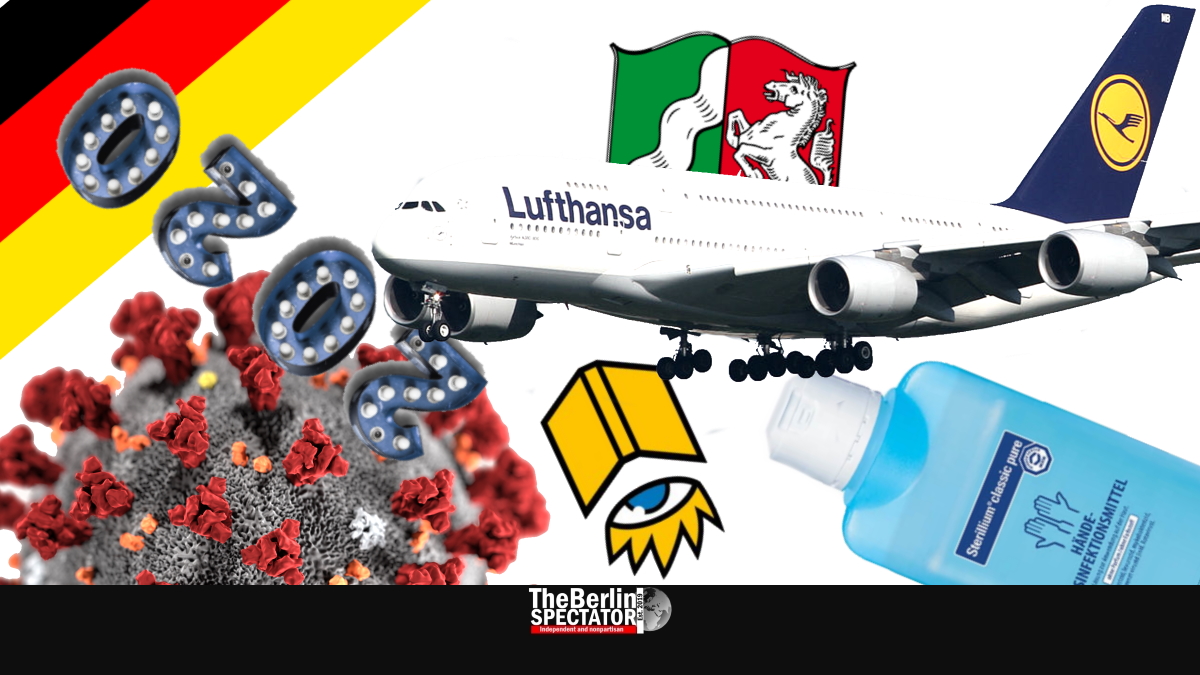 Within twelve days, the Coronavirus has caught hundreds of residents in Germany, and it hit the economy rather hard, including Europe’s largest aviation group.

Surgical masks, those simple masks nurses and doctors cover their faces with, are in high demand these days, even though there is no scientific indication they can keep away the Coronavirus from those who wear them.

At Berlin’s Virchow hospital, many of those masks were stolen, according to German-language media reports. The Charité, a network of university clinics which runs that hospital, denied a report according to which a truck load of those masks was just stolen. But it looks like masks did disappear from a children’s ward, along with disinfection fluid.

This is not about virus patients who are desperate, but about the medical products mafia trying to benefit from the Coronavirus crisis by selling those stolen items for exaggerated prices. The masks, the acquisition of which is now something the Federal Republic of Germany has taken responsibility for, can be used by infected patients to decrease the spread of the virus when they talk, sneeze or cough.

The number of confirmed Coronavirus patients in Germany has reached 718. More than half of them, 358, are in quarantine, both at hospitals and at home, in North Rhine-Westphalia where the situation is so problematic that Germany’s Health Minister Jens Spahn said Germans should refrain from trips to the region.

Bavaria was hit during the first Coronavirus wave in January. Then things looked good for a while, until the second wave came. On Thursday, 116 cases were confirmed. Baden-Württemberg counted 96 Coronavirus patients, Berlin is now at 24, Lower Saxony at 18 and 17 infected patients were registered in Hesse.

In Hamburg, there are 12 Coronavirus patients, 11 were counted in Rhineland-Palatinate, eight in Schleswig-Holstein, six in Mecklenburg-Vorpommern, four in Bremen, three each in Saxony and in the Saarland province. Brandenburg has two cases by now, and Thuringia one. (Note: The overall number mentioned in this article and the sum of those from the federal states might differ as some numbers are being updated during the day.)

For Berliners who felt they might be infected, things were difficult so far because they had to wait for many hours once they arrived at the only Coronavirus emergency admission in the German capital, located at the Virchow Clinic. Now three Vivantes clinics will have contact points for suspected Corona patients too, namely at the Wenckebach Clinic and their hospital in the Tempelhof district. The Vivantes Clinic in Neukölln has an emergency admission for Coronavirus cases as well.

As it turns out, the German economy might need a surgical mask, disinfection fluid and some support too, as it is being hit by the virus. In Munich, Bavaria’s First Minister Markus Söder demanded an “emergency concept” for the economy. He said, a “Corona shock” for German companies needed to be avoided, according to German-language media.

One good example for a corporation which is being brought to its knees is Lufthansa Group. The Eurasian crane in the Lufthansa logo has already been weakened by the virus and it is losing altitude. In fact, the demand for air travel is slumping because people are afraid to be infected during trips.

Earlier this week, Lufthansa announced it would park 150 aircraft on tarmacs for now and leave them there. Now there is talk about scrapping all flights done on the 14 Airbus A380s the company owns. Furthermore, half of all flights Lufthansa and its affiliates offer might be cancelled. The company is already offering its employees unpaid leave in an attempt to cushion the impact of the Coronavirus.

Of course the issues caused by the virus are not limited to Lufthansa or to aviation. Nor is Germany the European country hardest hit. In Italy, 4636 Coronavirus cases have been confirmed. A total of 197 Italian patients have died.

The Berlin Perspective: Stop Telling Us What To Do