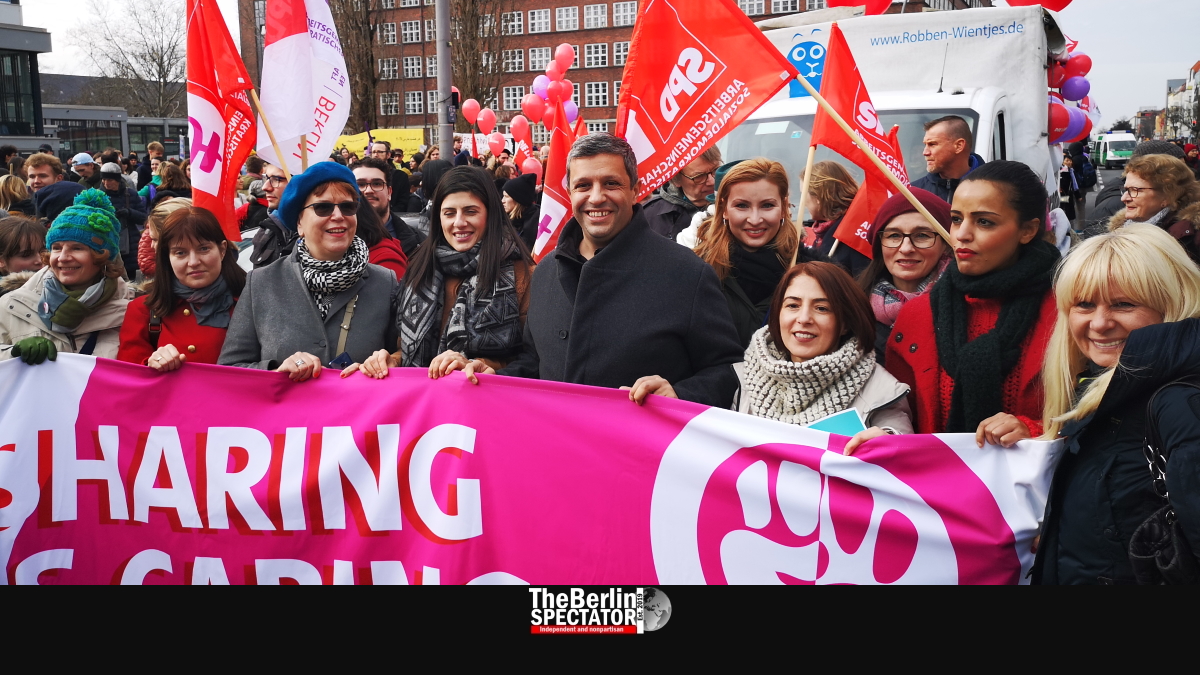 On International Women’s Day, some 12,000 people took part in a rally in Berlin this afternoon. It included a wide range of parties and organizations from the political center to the extremist left.

Some 12,000 women and many male supporters (number revised down from 20,000) demonstrated for gender equality in Berlin today. The rally started at ‘Leopoldplatz’, a square in the German capital’s ‘Wedding’ district, and was supposed to end at ‘Alexanderplatz’ in Berlin’s eastern city center.

The participants carried hundreds of signs with demands. Equal pay was among them. “Men of quality do not fear equality”, a sign read. Another one said “Stop praising men for the things women do everyday”. Many protesters called for sharing the household work and the upbringing of children fairly between the genders.

“Women’s rights are Human Rights” yet another sign read. All participants would have agreed with that one. But more radical individuals and groups demanded an end to capitalism, a world revolution, an end to the “patriarch rule” and a conversion to “eco-socialism”. Some participating women painted female sexual organs on their signs.

Solidarity with Women in Iran

Large German unions took part. So did part of the leadership of Berlin’s center-left Social Democratic Party (SPD), the Greens, ‘The Left’, the radical Marxist-Leninist Party which always shows up at almost any protest in Berlin, and women’s organizations of different kinds.

In the ‘Friedrichshain-Kreuzberg’ district, a second protest for women’s rights took place. “It is not a party but a fight” was this event’s motto. Some 700 women on bicycles were part of this one. More Women’s Day events and demonstrations took place in all major cities in Germany. Many protesters also wanted to show solidarity with women who are being oppressed in Iran and other countries.

Police accompanied and protected the two Berlin protests. While officers in the capital are used to violent demonstrations too, they knew these would be peaceful, as they are every year. Berlin is the only federal state in Germany which made International Women’s Day an official holiday.

In the past days, leading German politicians had commented on the equality status in their country. Chancellor Merkel said more headway had to be made. Berlin’s Governing Mayor Michael Müller stated the fact that the city state had this holiday was “an important signal with an effect beyond Berlin”.

Related column:
The Berlin Perspective: ‘Happy Women’s Day. Could You Iron My Shirt?’

Related article:
Berlin: The Emancipated City and its New Holiday