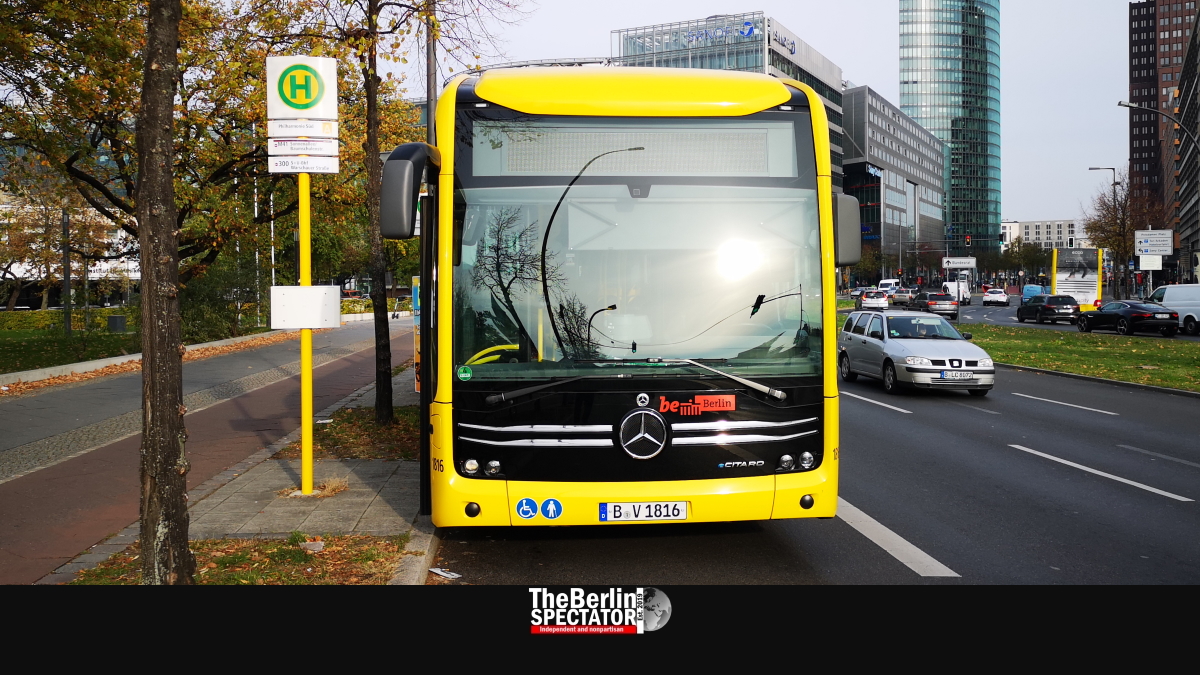 Within the next ten years, Berlin’s BVG will have to spend more than 5 billion Euro on electric buses in order to implement its plans, according to a newspaper report. The mobility turnaround does not come for free.

The vehicle sounds like a quiet turbine as it approaches the bus stop, and it looks a lot fancier than most other buses on the planet, even though it does resemble a bath tub or a fish can, in a way. The driver does not react to a passenger’s comment according to which he is driving the most elegant vehicle of all time.

Once everyone is inside, he kicks it. The way this guy accelerates the bus, all passengers are pressed into their seats. The g-forces are kicking in. Of course this kind of driving style raises the big question: Did the driver just decrease the vehicle’s range by 20 kilometers, just by showing off its power for a second? Probably.

The bus is a Mercedes-Benz ‘eCitaro’, the electric version of the Citaro which comes with a modern Diesel engine. It looks like the German manufacturer created a great bus. Hardly any city bus is more comfortable, it is emission-free (not its production though), quiet and powerful. The ‘eCitaro’ and its Polish competitors are perfect vehicles, if the task is to take a bunch of passengers from the train station to the zoo and back, in a small town, five times per day.

But this is Berlin, a city of 3.7 million inhabitants who move a lot. Berliners spend a lot of time on those U-Bahn and S-Bahn trains, on trams and buses. The city’s bus lines are quite long, and there are many. All buses in and around Berlin combined, most are owned by the BVG, cover a total of 300,000 kilometers (186,411 miles) per day. This is where new problems arise.

Modern Diesel buses easily do 700 kilometers (435 miles) with one fill, meaning they are work horses that will make people move all day long without complaining once. The latest generation of electric buses can do 140 kilometers (87 miles) before their batteries are sucked dry. On very cold or very hot days, the range shrinks further. And all of this leads to even more problems.

As if this issue was not more than enough already, there are more of them: In order to be charged, the operator of those buses, in this case the BVG, Berlin’s main public transport provider, needs the right infrastructure. While Diesel buses just need parking space, electric ones need charging devices right next to their parking spots.

The German-language ‘Morgenpost’ daily is probably not exaggerating. It reports, the BVG would have to invest 5.4 billion Euro (6.1 billion Dollars or 4.7 billion Pounds Sterling) until 2030 in order to go green completely, which is what the state-owned company wants. Since money does not grow on trees, there is a problem.

According to the ‘Morgenpost’, that huge amount is being mentioned in an internal report it obtained, a document written by the BVG itself. It includes the investment for the buses themselves and the conversion of their entire system to e-buses. The report says that the additional charge, compared to what the BVG would have spent for Diesel buses, is 1.734 billion Euro (2 billion Dollars or 1.5 billion Pounds).

But since electric buses also require more drivers, on top of it all, the additional cost might actually be 2.334 billion Euro (2.6 billion Dollars or 2 billion Pounds) in the next 10 years. Three new depots for electric buses are part of the BVG’s plans. So are conversions of the existing ones. In order to replace more than 1400 Diesel-propelled buses the BVG is using today, it will need 1900 e-buses by 2030, and 880 additional employees.