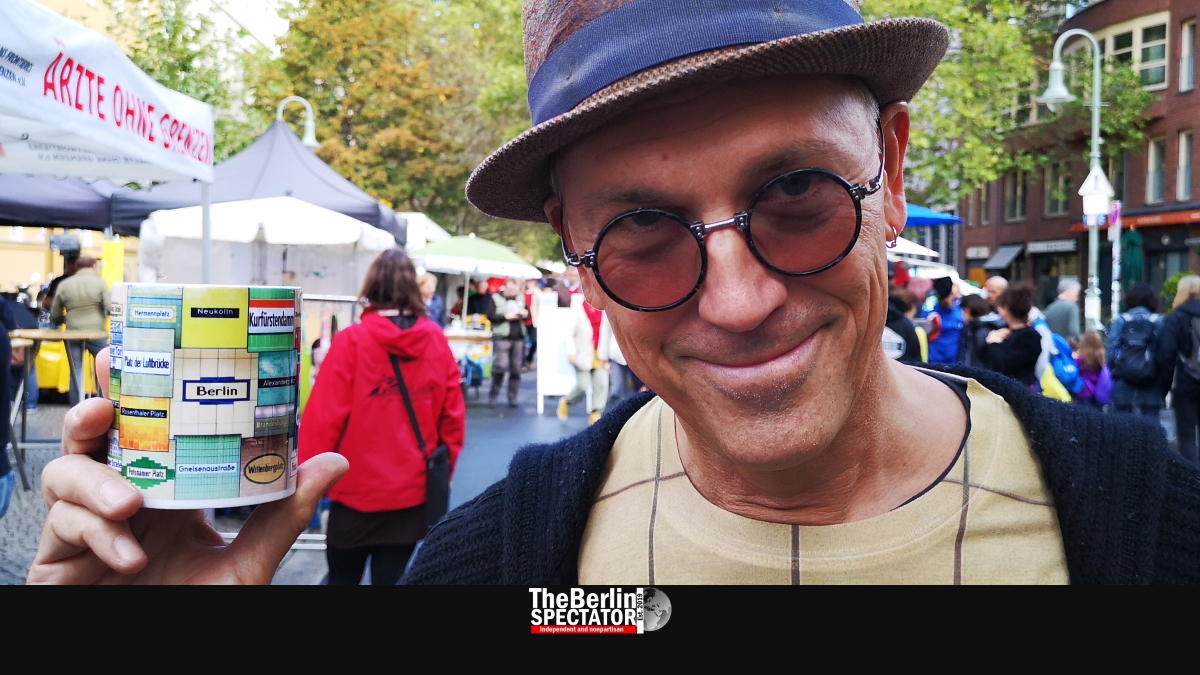 In Berlin, people squeeze into those ‘U-Bahn’ trains to get from ‘A’ to ‘B’ in the morning. Once the day is over, they go back to ‘A’. And ‘A’ is usually the subway station people identify with. This is where Tom Bäcker comes in.

Some years back, when the new millennium was dawning, Tom Bäcker was looking for a good business idea. He knew he was the visual kind of guy, when he took a trip to Buenos Aires. The lights and movements of those buses in the Argentinian capital fascinated him. So he shot colorful pictures which he would later exhibit.

Back in Germany, he developed the idea to print postcards with his stunning motives. He shot corners in cities and other spots, turning them into shapes, colors and pieces of art. In order to increase the number of potential customers, he also started his ‘Denglisch’ postcards collection. ‘Denglisch’ stands for directly translating German sayings into English, word by word. Only German-speakers understand the rather funny outcome.

When Tom Bäcker was thinking about extending his product catalog further, he had the big idea he needed. While riding the Berlin ‘U-Bahn’ every day, he kept on looking at those old station name logos in their 1950-s and 1960-s design and colors. This was when it hit him. So he started producing magnets with those station names. Then he added mugs. The rest is history.

Today, he runs his online business at ubahnstation.de and he takes his postcards, magnets and mugs with a gazillion station names to markets, including the great ‘Saturday Market’ at ‘Kollwitzplatz’ (expect separate article within days), one of the nicest and most international squares in Berlin.

Here, Tom Bäcker talks to potential customers from all over the world. Tourists from abroad love his mugs. They tend to choose ‘Alexanderplatz’ or a special mug which contains several of the most famous ‘U-Bahn’ stations. Those mugs are being used at breakfast tables in Athens, Birmingham, Chicago, Delhi and basically everywhere, since there is no better souvenir.

A piece of the Berlin Wall will usually end up in the back of some drawer. A mug, on the other hand, will be used every day. In case it falls on the floor and breaks: Who cares? There is still Tom Bäcker’s website, where a new one can be ordered.

Apart from the many tourists in Berlin, there are more than 13 million per year, Berliners love those station name mugs. Residents, no matter whether they are natives or expatriates, tend to identify with their ‘U-Bahn’ station. And Bäcker offers many of them, from Adenauerplatz all the way through the alphabet. It ends at ‘Zoologischer Garten’.

Even the names and art work of rather chaotic, dirty and stinky Berlin stations like ‘Boddinstrasse’, ‘Hermannplatz’ or ‘Kottbusser Tor’ are available, for those ‘Neuköllners’ and ‘Kreuzbergers’ who just miss their ‘U-Bahn’ stations so much while they are at home, at the office, traveling or while they are reading an article about Tom Bäcker’s mugs.

According to Tom Bäcker, many people buy his ‘U-Bahn’ mugs as presents. A good idea, since everyday items like flowers or chocolate bars are definitely boring. In case a mug is not an option, there is still Bäcker’s ‘Memo’ game, his version of ‘Memory’. Finding the same stations twice is the goal.

As he is standing there, behind his market stand full of mugs and other items, talking about his endeavor, Tom Bäcker turns out to be a nice guy who likes to have little chats with people or joke around with them. When tourists show up, he quickly understands what might interest them.

But it is not just about having a good time at the market place. Bäcker spends many hours making his products. It is more than a full time job. At least for the mugs, he found a solution. Soon he will have them made at a sheltered workshop and have more time to himself as a result. It won’t be that much, since the next project is already looming at the horizon.

Do you like this publication? We thought you would and we are glad you do.
Would you consider supporting The Berlin Spectator?
If yes, please spread any features or articles you like.
By the way: There is a donation page too (hint).