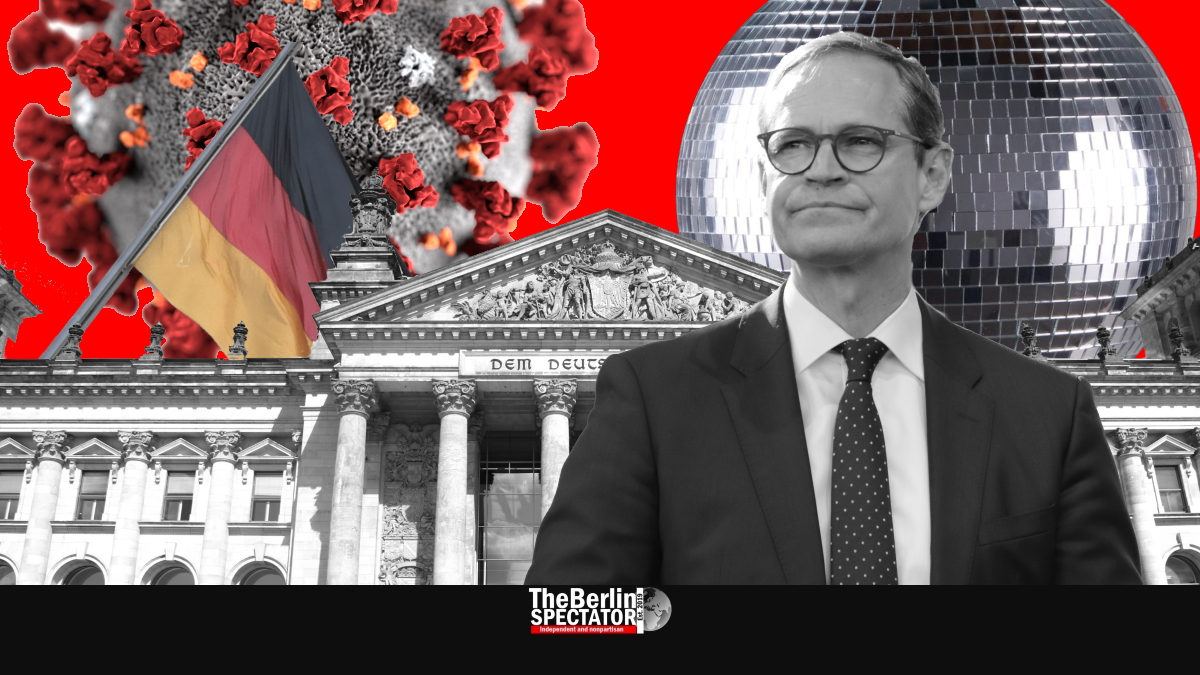 On Saturday evening, the number of Coronavirus cases in Germany stood at 4,181, meaning it doubled since Wednesday and more than tripled in the past six days. For the entire nation, life is changing dramatically. When even Berlin stops partying, something big must be going on.

In her weekly podcast, the Chancellor of the Federal Republic of Germany, Angela Merkel, reiterated her government’s priorities. At this stage there was no cure for the diseases caused by the Coronavirus. Its spread needed to be slowed down in order to make sure the health system would not be overburdened. Social contacts needed to be ceased wherever possible. “That way we will help those who will be affected the most”, the Chancellor said, namely elderly people and those with pre-existing conditions.

Merkel announced the government had changed its modus operandi. There was a new Cabinet Committee that included the ministers of interior, exterior, health and defense, along with Merkel herself. It would take decisions for the safety and health of the people.

If anyone had asked Berlin’s Governing Mayor Michael Müller (see main photo above) two months ago if he would ever restrict the social life in Berlin, he would probably have said no. Now this is exactly what he did. “Public life and social contacts” would have to be “restricted as much as possible”, he said in this surreal situation.

In Berlin, all clubs and pubs will have to close on Tuesday, until further notice. The only reason the parties in Berlin might continue that long is a legal one. The Senate needs a few days to prepare. Restaurants are allowed to open, at this stage, but they have to make sure there is enough space between customers.

“I ask all Berliners for their understanding”, Müller said. “This is about your safety and health. We cannot promise quick medical help. For that reason all encounters will have to be reduced to a minimum. Everyone will feel the restrictions. This phase is very important. I am asking you for solidarity, especially with elderly people.” First Ministers in other federal states within Germany made statements that were just as dramatic.

While kindergartens and school officially closed, Berlin will make some exceptions. An “emergency childcare” will be provided at every school in the city, according to the Senate. Some kindergartens located near hospitals will remain open, in order to accommodate doctors and staff who have children. On Saturday evening the Senate forbade events with more than 50 people, effective immediately. Certain kinds of businesses are being shut down.

In the German capital, 174 infected persons were listed on Saturday morning, which seemed very little compared to the 1,433 cases North Rhine-Westphalia had, the 569 Coronavirus patients in Baden-Württemberg or the 558 in Bavaria. As usual, most patients were quarantined in their homes while some of them were being treated at hospitals.

So far, eight people in Germany have died of the respiratory disease caused by the virus. An even more alarming number might be this one: Only 46 former Coronavirus patients are cured. Considering the first Corona wave hit Germany in late January, that number is very low.

The virus started hitting prominent Germans too. Alexander Graf Lambsdorff is the second MP of the liberal party FDP who tested positive. He told the ‘Spiegel’ magazine he had flu-like symptoms and had put himself in quarantine. Since Graf Lambsdorff took part in meetings just before he was tested, some of his colleagues will have to be quarantined too.

Lambsdorff told the ‘Spiegel’ even though he had adhered to all hygiene suggestions, he was infected now. “This shows how important it is to cut social contacts in order to interrupt infection chains.” MPs at the Berlin Bundestag can not really be in quarantine while they keep on working. The Bundestag will soon be in session to take decisions about military missions in Afghanistan and elsewhere.

Just like in Berlin, schools and kindergartens were closed all over Germany, including in Brandenburg, Bremen, Lower Saxony, North Rhine-Westphalia, Rhineland-Palatinate, Schleswig Holstein and Hamburg. In Mecklenburg Hither-Pomerania they will be shut down in two counties only, for now. But in Baden-Württemberg, Thuringia and Saxony-Anhalt, schools and childcare facilities will be closed until after the Easter vacations.

Things are different in two federal states, namely Hesse and Saxony, parents are supposed to decide whether their children are going or not. Because not all parents have the opportunity to work from home offices, the decisions taken in the capitals of Germany’s 16 provinces and city states will be causing problems for many.

The Coronavirus crisis has led to so many issues that listing them all would fill an encyclopedia by now. Blood donations are decreasing substantially. The Red Cross just asked healthy Germans to donate blood since it was needed for the treatment of Coronavirus patients.

Bavaria’s First Minister Markus Söder wants Germany’s armed forces, the Bundeswehr, to be involved more. He said their hospital staff, doctors, laboratories and hospitals needed to be included. In some federal states, the Bundeswehr is already supporting the authorities. The city state of Berlin has asked the military for mainly logistical help.

The Bundeswehr announced it would not take part in NATO’s large exercise Defender Europe 20. Protecting the health of soldiers was the reason for this decision.

BER Airport’s Opening: The Only Uncancelled Event in Brandenburg