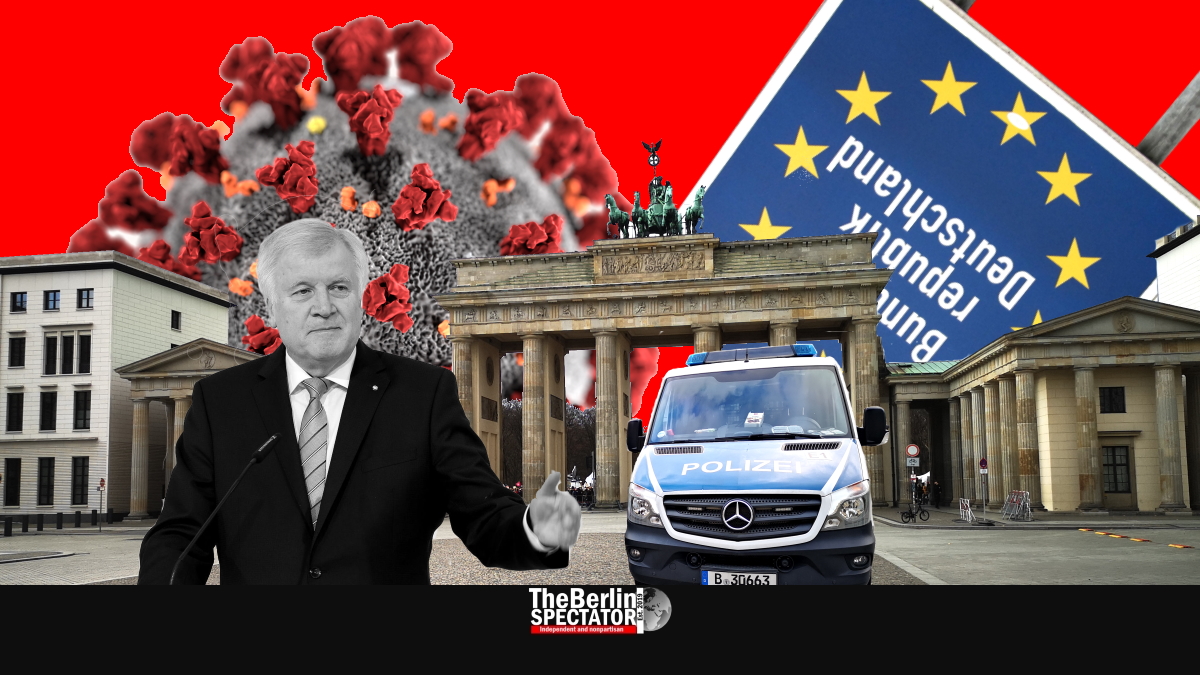 In Berlin, Interior Minister Horst Seehofer announced the closure of Germany’s borders to Austria, Switzerland, France, Luxemburg and Denmark because of the rapid spread of the Coronavirus. The measure was implemented at 8:00 a.m. today.

Because of the rapid spread of the Coronavirus, the German government took another far-reaching step. At 8:00 a.m. on Monday, the borders to Austria, Switzerland and France were closed. Interior Minister Horst Seehofer had announced this measure on Sunday. Those to Denmark and Luxemburg were shut as well.

There are exceptions though. Returning Germans, returning individuals with residence permits, commuters and suppliers have the right to enter the country. Germany’s federal police is sending additional officers to the borders in question.

Ursula von der Leyen, the new President of the European Commission, said Europe needed to make sure food deliveries could come through in spite of the announced border closures. Thousands of truck drivers were already stuck at the European Union’s borders, she stated. “If we do not act now, shops will have trouble stocking up with certain products”, von der Leyen said.

The next measure the federal government in Berlin seems to intend to take is the closure of all shops except for supermarkets, drug stores and pharmacies, according to German media.

Exactly one month after the first European Coronavirus death was reported in France, the situation has worsened substantially, with 2,366 related deaths in Europe. In Italy alone, more than 1,800 people have died, 292 in Spain, 127 in France, 40 in The Netherlands, 35 in the United Kingdom and 13 in Germany.

As of 3:50 p.m. on Monday, there were 6,672 infected persons in Germany. As many as 2,493 of them were reported in North Rhine-Westphalia, 977 in Baden-Württemberg and 1,067 in Bavaria. Berlin has 283 cases by now. Considering the increasing speed at which the virus is spreading, the overall number of Coronavirus cases in Germany is likely to hit 7,000 by Monday evening.

Bavaria declared a disaster situation today. The implications are that all relevant decisions will be taken centrally, by the federal state’s government. For now, there would not be any curfews in Bavaria, First Minister Markus Söder said.

Schleswig-Holstein, the federal state in Germany’s very north-west, has closed its islands to tourists and anyone but their inhabitants. This step applies to Sylt, Amrum, Föhr, Nordstrand and Fehmarn. First Minister Daniel Günther asked vacationers not to head for Schleswig-Holstein. Those already there needed to leave as soon as possible, he said.

Schools and kindergartens will be closed in almost all of Germany, starting today. There were two exceptions: In Berlin, those establishments will be closed starting on Tuesday. Schools and certain kindergartens are supposed to provide emergency childcare services, in order to make sure the occupation groups needed most in this crisis, including doctors, nurses, police officers and fire fighters, can do their work. In Saxony, those closures will take place step by step.

Hamburg forbade all events, public and non-public ones, no matter how many participants they would have had. The city state banned trade fairs and shut down exhibitions, theaters, museums, cinemas, cultural centers, youth centers, night and dance clubs, gambling halls, casinos, brothels, swimming pools, fitness studios and gyms.

Restaurants in Hamburg may still open if the distance between tables is 1.5 meters (5 feet) or more. Open air markets may still open. Weddings are still legal as well, but Hamburg’s authorities recommend postponements or cancellations.

“During the next weeks and months, Hamburg will be confronted with challenges”, First Mayor Peter Tschentscher said. “This is about confining the impact of the Coronavirus epidemic as much as possible.” He said the measures taken were necessary. Everyone in Hamburg needed to adhere to them and act responsibly.

Berlin imposed very similar restrictions this past weekend. But for now, events with less than 50 participants are allowed in the German capital as long as the organizers generate lists with the contact data of all participants.

The German economy was already hit by the Coronavirus. After Lufthansa, the country’s flag carrying airline, the giant tour operator TUI announced it would need help from the state after it shut down operations in most fields it used to work in, including holiday packages, cruises and hotel accommodations.

Germany’s main long-distance train service provider Deutsche Bahn said it would cancel many regional trains because the number of passengers had decreased substantially. In order to protect passengers and employees, tickets would not be checked anymore.

In spite of the virus, local elections took place in Bavaria on Sunday. At some polling stations, disinfectant was provided. Voters were supposed to bring their own pens so that they would not have to touch the ones used by others, including those infected by the Coronavirus. Most results are not available yet. Some candidates for mayor will have to go into run-off elections in two weeks from now.