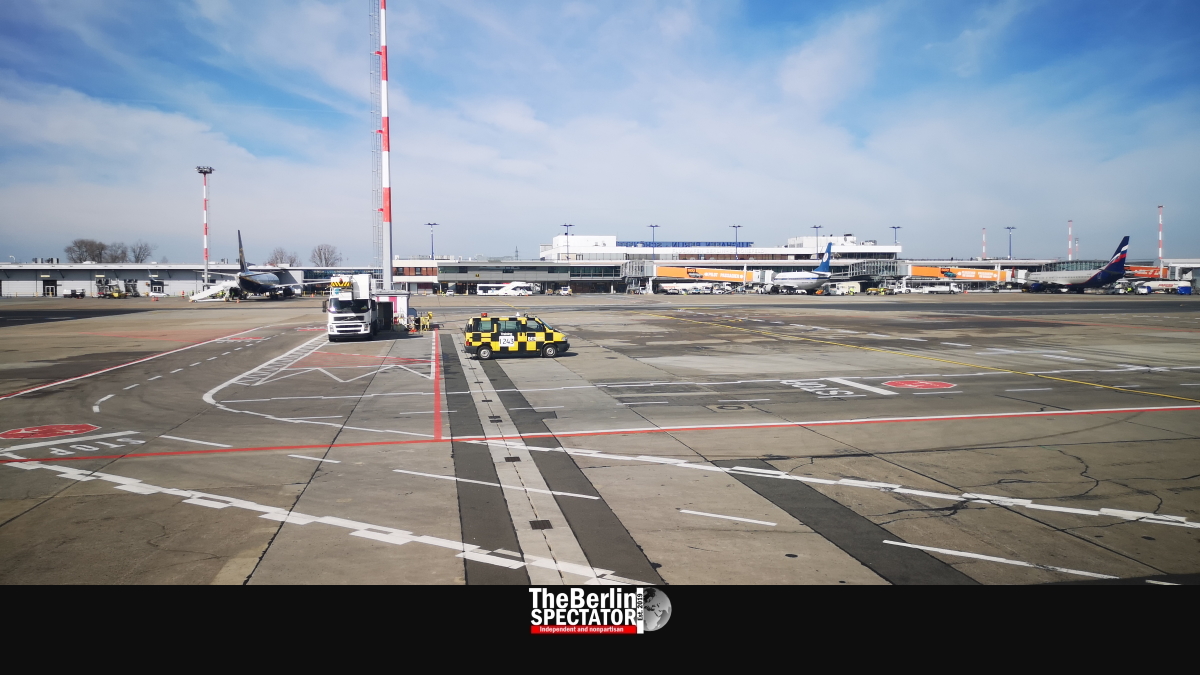 Travelers who needed to catch some of the few European flights that are still taking off are witnessing unusual scenes. Those include empty tarmacs and terminals and nervous border guards in a surreal atmosphere.

Wait a second. This is Berlin’s Tegel Airport. So where is the usual waiting line for the Delta flight to John F. Kennedy Airport? Where are the annoying crowds in the arrival hall at Schönefeld Airport’s ugly Terminal D (the future Terminal M)? The few people who enter any major airport in or around Berlin, or elsewhere in Europe, these days will witness surreal situations they have not seen before.

Am I in the right movie? Is this ‘Airport ’77’, ‘Passenger 57’, ‘Nowhere to Land’, ‘Snakes on a Plane’ or reality? The film everyone would like to see in front of their eyes is very different, for sure. If reality does not include aircraft at airports, what else is wrong?

Just three months ago, the 35 millionth passenger for last year was honored. Where he was drowned in prizes on Christmas Day, a yawning void is all that is left today. Some flights are still taking off and coming in, for now, but what they used to call air travel has become a sorry sight.

Germans and other residents of Germany who caught some of the last planes back home were glad early this week. A dental medicine student from Hanover who was on a Ryanair flight from Sofia to Berlin on Monday said he hoped the airline would still fly later this week, because some of his fellow students who needed to get out of Bulgaria had tickets for return flights on Thursday.

A German-Bulgarian-American student who needed to get from The Netherlands to Bulgaria booked a Lufthansa flight from Amsterdam via Munich to Sofia just hours before she boarded the plane. She may have been one of the last passengers on those routes. Once she got to Sofia Airport, she was forced to sign a declaration that said she needed to be in quarantine in her home for 15 days and that contraventions could lead to a five-year jail term.

The Only Way Out

At least she made it. Other Germans did not. Thousands now rely on Foreign Minister Heiko Maas’ expensive retrieval program. Coronavirus or not, keeping aircraft flying as long as possible has advantages. Family reunions in the times of Corona are important.

In Sofia, the airport tarmac was deserted on Monday. A Boeing 737MAX that is not allowed to fly waited for a miracle, some older 737s, one was missing its left engine, were just standing around corroding as well, and Bulgaria Air’s modest Airbus fleet was parked there. One single Turkish Airlines flight to Istanbul and a few Ryanair flights were the only way out of that place.

Throwing Cash Out the Window

Inside the terminal, unfriendly and nervous border guards who wore simple filter masks told two cleaning ladies with spray bottles in their hands which areas they wanted them to disinfect. Sofia Airport’s Terminal 2 was closed to everyone but passengers of the few flight connections still available, flight crews and airport staff.

At Schönefeld Airport, on the other hand, nobody cared who entered or left the terminals. But at least they were not as crowded as they used to be before the world turned upside down. Part of the tarmac between the old terminals and BER Airport is already being used as a parking lot for aircraft Lufthansa is not using anymore, thanks to the virus. Not flying is like throwing millions out the window using shovels, but also prevents infections on planes.

It is time for new flight announcements. “Please remain strapped until the captain has removed his Coronavirus protection mask and the crisis comes to a complete halt. We thank you for flying Lufthansa.”