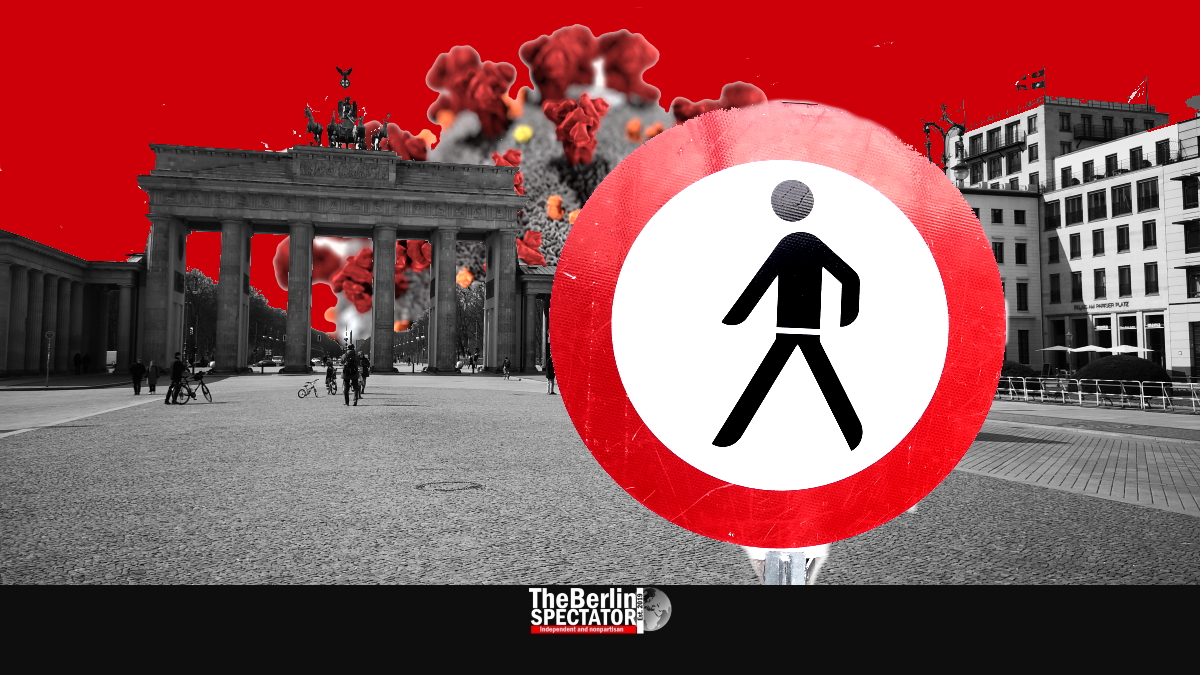 In Germany it is too early to say whether the many measures taken by the federal government and the sixteen federal states have any effect. For now, the number of infected persons is still rising rapidly. Early on Sunday morning, it stood at about 22,000.

On Saturday, cooler weather in the north and rain in the south kept young Germans from gathering in the streets and parks. Many of them may have started heeded the warnings from officials and scientists too. In Berlin, mainly couples and families took walks in the city’s parks while keeping their distance to others.

In normal times, the German capital’s city center would be crowded on Saturdays. Yesterday, it was virtually empty. At Brandenburg Gate, a spot that is usually overcrowded by selfie-shooting tourists, a family on bicycles took a break while two TV teams and three photographers, including The Berlin Spectator’s reporter, captured the quiet atmosphere.

The situation in Germany’s hospitals is the exact opposite. In some parts of the country, intensive care units are already crowded. Required material, including protective masks and disinfection fluids, which was promised by the government has not arrived in many cases.

As it turns out, not all Coronavirus patients whose lives need to be saved are elderly people. Doctors in charge say the number of young patients in this situation is on the rise. A difficult progression of the disease can hit people of all ages. Clinics all over the country are working on doubling the size of their intensive care units. Whether this is sufficient remains to be seen.

Complaints about empty supermarket shelves in Germany keep on coming in. In Berlin, Transport Minister Andreas Scheuer said he wanted to let logistic centers owned by supermarket chains operate 24 hours per day in order to resolve issues with deliveries. A few days ago, Germany had already thrown its Sunday driving ban for trucks overboard.

Help for Parents and Tenants

Apart from Coronavirus patients and consumers, the government wants to support parents whose income was decreased by the effects of the Coronavirus. Family Minister Franziska Giffey announced an aid package. Tenants will likely get help too. Berlin is looking into ways to protect those who got into financial trouble because of the crisis and cannot pay their rent. This is about both private tenants and small businesses. Lease terminations might be forbidden for a while.

The German government’s help programs cost money. Because of the emergency situation caused by the spread of the Coronavirus, Berlin intends to go into debt, which is something it desperately tried to avoid before the virus hit. There is talk about 150 billion Euro (161 billion U.S. Dollars or 139 billion Pounds Sterling) in new debt. Those funds will reportedly flow into emergency aid programs for companies and employees.

In the German retail business, certain items have been selling a lot more than before. Apart from durable food, meat and hygiene articles, condom and sex toy manufacturers have said their sales had more than doubled since the crisis had commenced.

Polls confirmed that most Germans approve of the way Chancellor Angela Merkel handles the Coronavirus crisis. Her conservative party CDU gained support in some of the latest polls (Read separate piece ‘How Good are Germany’s Top Corona Crisis Managers?‘). In the early afternoon, Merkel will discuss the situation with the First Ministers of all sixteen federal states.

On Sunday morning, the federal state of North Rhine-Westphalia had about 6,800 Coronavirus cases, more than the entire country had a week ago. In Germany’s south-west, Baden-Württemberg and Bavaria were approaching 4,000 cases each. Lower Saxony registered almost 1,500 infected persons, Hesse more than 1,100. In Rhineland-Palatinate and the city state of Berlin, the number of cases exceeded 1,000 on Saturday night.

Four districts in the German capital have more than a hundred Coronavirus cases each. They are Mitte, Pankow, Charlottenburg-Wilmersdorf and Friedrichshain-Kreuzberg. Among Berliners, those aged 30 to 39 are the group affected the most, followed by individuals in their 40s and 50s.

Until recently, the Berlin Senate had denied more restrictions, including a curfew, were in the making. By now things seem to have changed. According to German publications, Governing Mayor Michael Müller and his government are ready to follow the Bavarian example. A curfew might be announced as early as today.

On Saturday, Berlin had forced restaurants to close. So far, they had been allowed to open from 11:00 a.m. to 6:00 p.m.. But they are allowed to sell takeaway food and deliver meals to people’s homes or work places.