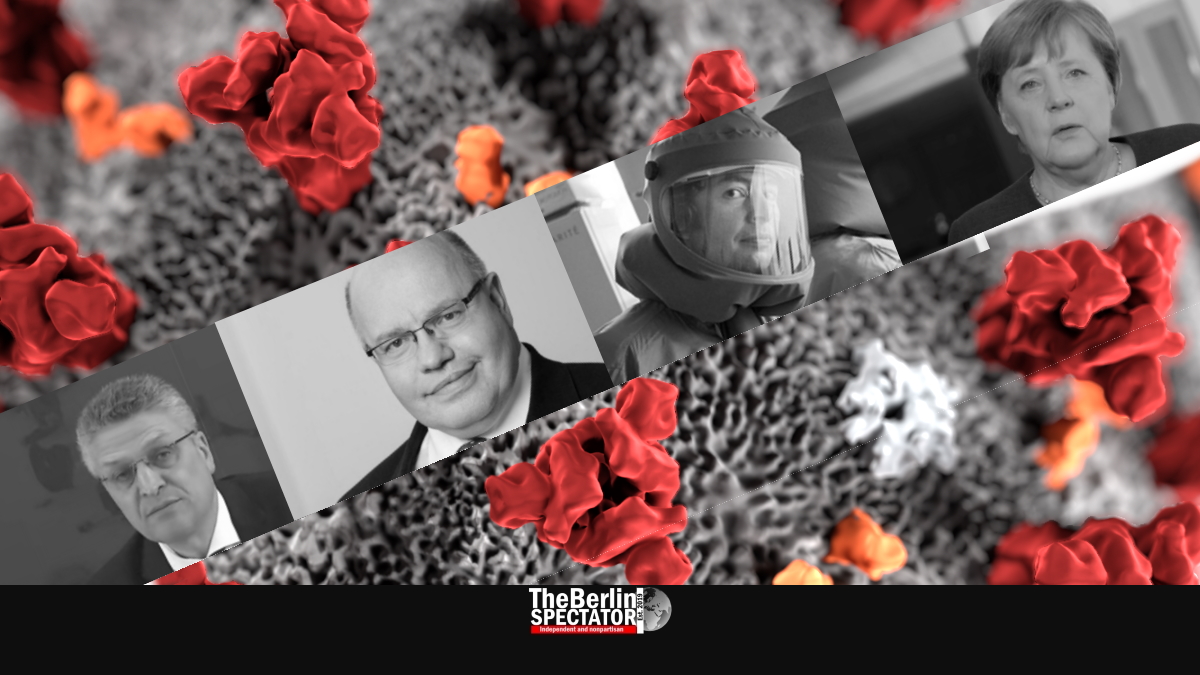 The Coronavirus crisis is serious. How well a country gets through these hard times very much depends on the decisions that are being taken. Who are Germany’s main crisis managers? How good or bad are they?

A virus conquers the world. Since it was an unknown one, virologists have to do a lot of research while they recommend steps to governments at the same time. The politicians in charge take decisions based on the advice they get from the experts. Both roles are important.

The right strategic decisions can save a lot of lives. Another important aspect is how they are being sold to the general public. Who are Germany’s crisis managers and top scientists involved in the decision taking? How good or bad are they?

Angela Merkel. Age: 65. Profession: Chancellor of the Federal Republic of Germany. She is not the best self-promoter on Earth, but a pragmatic thinker. The former scientist will change her opinion if necessary and justify her positions well. In the early stages of the Coronavirus crisis, she let her health minister do the talking because she is not the kind of person who needs to stand in the center of the stage all the time. Now that the crisis has become more serious, she took over and cut a good figure while taking valid decisions. According to a new poll, a majority of all Germans believes Merkel is handling the crisis well. Score: 9 out of 10. A head of government to rely on.

Lothar Wieler. Age: 59. Profession: President of the Robert Koch Institute (RKI). The microbiologist and veterinarian has been heading the main German research institute responsible for disease control and prevention for five years now, almost to the day. In this crisis, the German government listens to him and bases its decisions on his input. Professor Wieler has been on television every day, explaining the Coronavirus, the latest scientific finds and his expectations to the nation without keeping alarming parts to himself. He has done so in a calm, convincing way all along. Score: 10 out of 10. Excellent performance.

Jens Spahn. Age: 39. Profession: Federal Minister of Health. The youngest minister in Angela Merkel’s government was the one who made announcements and explained things to the Germans at the beginning of the crisis. Spahn, who was known as one of the most active government members even before, did an o.k. job. As the pandemic progressed, he had to change his assessment of the situation more than once. Now it turned out the protective clothing and masks Spahn promised hospitals weeks ago never arrived, according to the German Association of Statutory Health Insurance Physicians. Still he might get more power over what is going on in the federal states. Score: 7 out of 10. A hard worker who partially delivers.

Christian Drosten. Age: 48. Profession: Chief Virologist at the Charité University Hospital in Berlin. It is hard to tell whether Drosten has the best or worst job in all of Germany these days. It is one of the two. As a virologist for emerging viruses, he is the guy who is at the right place at the right time. On the other hand, all the responsibility in his position would definitely be hard to take for most people. But Drosten has not lost his coolness at all, it seems. Since the Coronavirus crisis began, he has been explaining the virus, its implications and new findings to the nation. He is a media star without noticeable diva symptoms. Here is another perfect son-in-law. Score: 8 out of 10. Knowledge and coolness in one.

Peter Altmaier. Age: 62. Profession: Minister of Commerce. The Merkel confidant and fellow CDU member is the longest-serving minister she has. He has had a lot of responsibilities in the Chancellery and several ministries in the past years. In the Coronavirus crisis, he is working relentlessly on saving German businesses in cooperation with his Social Democratic colleague Olaf Scholz by providing help packages worth tens of million of Euro. His modesty makes Altmaier likable, his approach convinces and his reliability is yet another good trait, especially in a crisis like this one. Score: 9 out of 10. A good guy.

Ursula von der Leyen. Age: 61. Profession: European Commission President. The fact that national decisions seem to be more important in the Coronavirus crisis is not entirely her fault. She is a worker and trying hard, for instance by coordinating the movement of goods in spite of the closure of the European Union’s borders. With know-how, persistence and motivation, the German Commission President is helping Europe. Score: 7 out of 10. She would have gotten more if she had managed to gain more influence in this crisis.

Markus Söder. Age: 53. Profession: First Minister of Bavaria, chairman of the conservative party CSU. Whether Söder is a pragmatic man of action or a populist is in the eyes of the beholder. Maybe he is both in one. In this crisis, Bavaria is one of the federal states most affected. That is why his way of shooting ahead is justified, his supporters believe. His critics say he could have waited for the federal government and the other federal states before announcing a curfew for Bavaria. Score: 7 out of 10. Quo vadis, Söder?

Heiko Maas. Age: 53. Profession: Minister of Foreign Affairs. Heiko Maas stopped traveling himself, just like all other Germans, for obvious reasons. He and his ministry are busy spreading travel warnings, now more than ever. Four days ago, Maas jump-started a pick-up program for German tourists who are stranded in Latin America, North Africa and other regions. He had to pile up 50 million Euro on the table in order to make it happen. These days, some 10,000 German tourists per day are being flown home. No more piña colada at the beach. Score: 7 out of 10 for the country’s main travel agent.

Germany’s doctors in hospitals all over the place are saving lives. They usually do, but in this crisis even more. Without their efforts we would be lost. Of course this applies to all countries, but this is about Germany. A big thank you to all of them. Score: 20 out of 10.