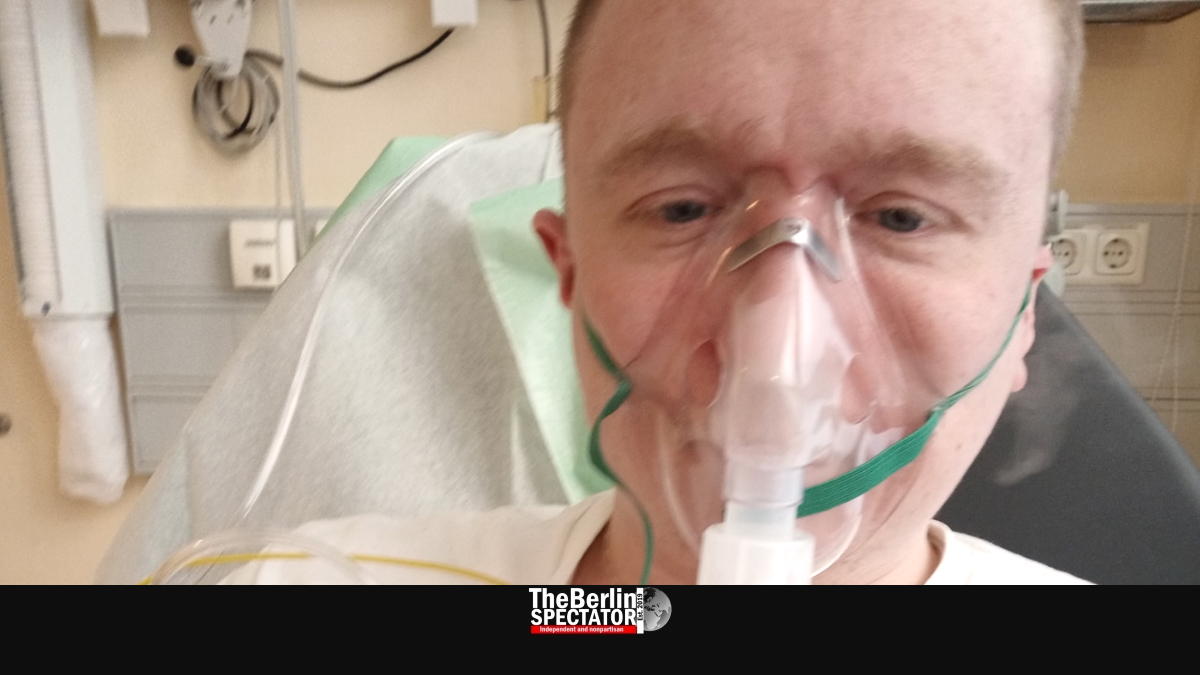 Joshua Beedle at the clinic. Photo by J. Beedle
Share

Berlin now has more than a thousand COVID-19 patients. One of them is Joshua Anthony Beedle who is originally from Doncaster in the United Kingdom. It happened on his birthday.

It was March 12th, 2020, when Joshua Beedle took the U-Bahn, Berlin’s subway, tube, underground or metro, to his gym in the Wilmersdorf district for the last time. Then it happened. On his 28th birthday, March 13th, he had trouble breathing and called an ambulance.

“The only way I could have caught it was in the U-Bahn”, Beedle told The Berlin Spectator. In the Coronavirus crisis, those gym visits were “the only times I left my apartment, so it’s the only contact I really had.”

On March 12th, Berlin’s public transport was still crowded. All Berliners, expatriates and natives, know what crowded U-Bahn trains feel like. They touch door buttons or those poles everyone clings to. In those days, when everyone was still moving around in the city, there was no escaping it.

Joshua Beedle does not know when exactly he got infected. “My symptoms first appeared on Friday the 13th”, he says. “I know as it was my birthday. And the day before was the last time I used the U-Bahn”. Since the incubation period for COVID-19 is two to 14 days, it could have happened at any moment in early March.

The ambulance took the British expatriate to ‘Krankenhaus am Urban’, a big hospital in Berlin’s Kreuzberg district. Beedle’s description sounds like he was in the movie ‘Outbreak’: “It was scary in the emergency unit. The walls were covered in plastic sheeting and all the nurses were in yellow plastic suits and masks. It was scary, but they were very good and calm.”

At the clinic, the doctors managed to help Joshua Beedle with his breathing. He says this part “seems to be under control today”. A few days ago, he was sent back home. “Now, I have a fever and a really bad headache.” And he is suffering from fatigue: “Things like tying a shoe lace or standing in the shower really tire me out”, says a 28-year-old, sporty young man, nine days after he got those breathing problems.

In spite of what he went through, and still is, Joshua Beedle believes he was lucky. “I am 28, healthy and have no lung problems, but I was lucky it didn’t hit harder.” The young man from Doncaster is not one of those Berlin youngsters who gathered in parks and partied in spite of all recommendations spread by the German government and scientists not to be in close contact with others. He was actually very careful. Still he contracted the Coronavirus.

“We need to protect people that aren’t as healthy or young, because people with illnesses such as asthma or those who are too old may not be so lucky”, Joshua Beedle told The Berlin Spectator on Sunday. “Do not take any chances. Use your brain. If you have it, stay in. You are not just protecting yourself but you’re protecting the most vulnerable”, he said. “Because you may be healthy enough to pull through, but being naive and unthoughtful may put somebody else’s life at risk.”

His family in England was worried sick. Since the bad birthday surprise he suddenly felt, he has been in touch with them a lot: “I have spent most of my time on the phone back to friends and family.”