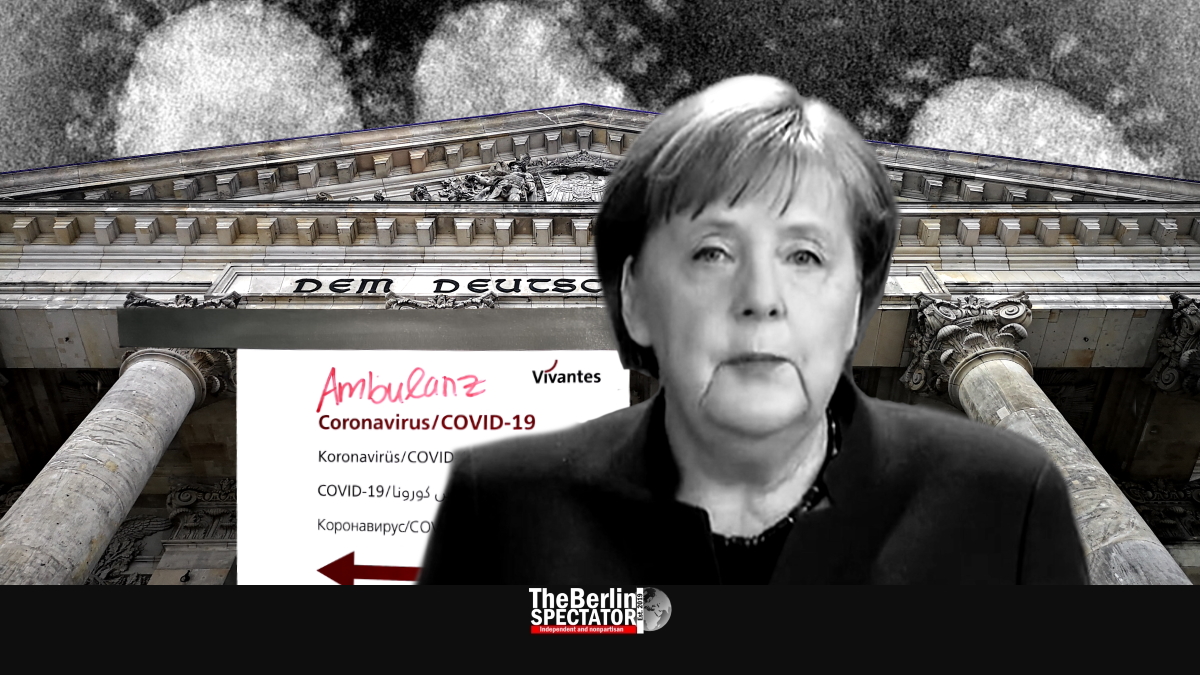 The German government imposed new rules on its citizens and other residents in cooperation with the federal states. Because of the rapid spread of the Coronavirus and the behavior of some, the step is necessary.

On Sunday, Chancellor Angela Merkel had just announced the details of Germany’s new ‘contact ban’ when she was told a doctor who had given her a vaccination on Friday had been tested positive for the Coronavirus. This meant the chief crisis manager and head of government had to go into quarantine at home herself.

Helge Braun, her Chancellery Minister said in a television talk show on Sunday night, there was hope Merkel was not infected. But of course neither Braun nor Merkel herself can tell. She is now governing the country and managing the crisis from home.

After an online gathering she had with the First Ministers of Germany’s federal states, Merkel had announced new rules designed to slow down the spread of the Coronavirus.

Citizens and residents are supposed to limit their contacts to others to a minimum and they should keep a distance of 1.5 to 2 meters (approx. 5 to 6.5 feet). Being outdoors with one person who lives in a different household, or with people who do live with the individual, is allowed. This is not an actual curfew.

People may go to work, to important appointments with one person or at their doctor’s office, to do training, take walks or work on “necessary tasks”. But people who gather in groups or party will be fined. Restaurants may only sell takeout food, hairdressers and similar businesses have to close, companies need to follow strict hygiene rules.

As it turns out, agreeing on these nationwide rules the federal states implemented was not that easy. According to participants of the online meeting, there was a loud argument between Bavaria’s First Minister Markus Söder and his colleague from North Rhine-Westphalia Armin Laschet who had criticized him for imposing a ‘contact ban’ in Bavaria without waiting for Berlin and the other federal states. Merkel had to intervene.

The government’s goal is to slow down the rapid spread of the Coronavirus. On Sunday night, the official number of infected persons in Germany was 24,873 (sources: Johns Hopkins University, Springer SE). By Monday at 11:00 a.m., it had hit more than 26,000.

On Saturday in the late morning, less than 48 hours ago, there had been 20,000 confirmed cases, last Thursday there were 15,000, on Tuesday 8,500. Ninety-four people in Germany have died from the virus so far. The number of dead is significantly lower than in several other countries with a comparable number of infected persons.

In Berlin alone, there were 1,071 Coronavirus cases on Sunday night. One of them, Joshua Beedle, an expatriate from England, told The Berlin Spectator how he suddenly had problems breathing and called am ambulance. He was treated at the ‘Vivantes Urban Krankenhaus’, a hospital in Berlin’s Kreuzberg district.

By now his breathing is better, which is why he was sent home. But Beedle, who believes he contracted the virus in Berlin’s public transport, is still suffering from symptoms like fatigue and headaches. He proves the fact that the respiratory disease caused by the virus does not only hit elderly people, or those with pre-existing conditions, but also young, sporty individuals like him.

In some of Germany’s federal states, including Berlin, the new contact ban is already in place. Since midnight, people outside might be asked for their “feasible reasons” by police officers. There is a wide range of possibilities here. The individual might be on his or her way to work, to take a walk, to purchase medication or shop for food.

Volunteers who help others in the crisis, politicians with certain functions and other groups are exempt from the ‘contact ban’, but they are still supposed to watch it and keep their distance. The same rules are now in place in neighboring Brandenburg.

Before the latest measures were announced, there had been an argument within the Senate. While Dilek Kalayci, Berlin’s Health Senator, wanted to impose additional restrictions on the Berliner, just like Bavaria did on Saturday, her partners from the Greens and ‘The Left’ had insisted on waiting a little longer to see what kind of effect the old measures would have. Then the agreement with Merkel and the other federal states was struck.

In the meantime, an aircraft with 200 German tourists landed at Schönefeld Airport in Brandenburg on Sunday night, as the RBB reported. They had been in Egypt, which is considered a high-risk country in the Coronavirus crisis and therefore had to go into quarantine in their homes.

This flight was not part of Foreign Minister Heiko Maas’ expensive retrieval project. He is working on flying home thousands of German tourists who are stuck in several countries around the world because of cancelled flights and closed borders.

In order to save companies and jobs in the Corona crisis, Chancellor Merkel’s cabinet just approved an aid program worth more than 150 billion Euro (161 billion Dollars or 139 Pounds Sterling). Tenants and hospitals will be supported. So will applicants for social welfare.