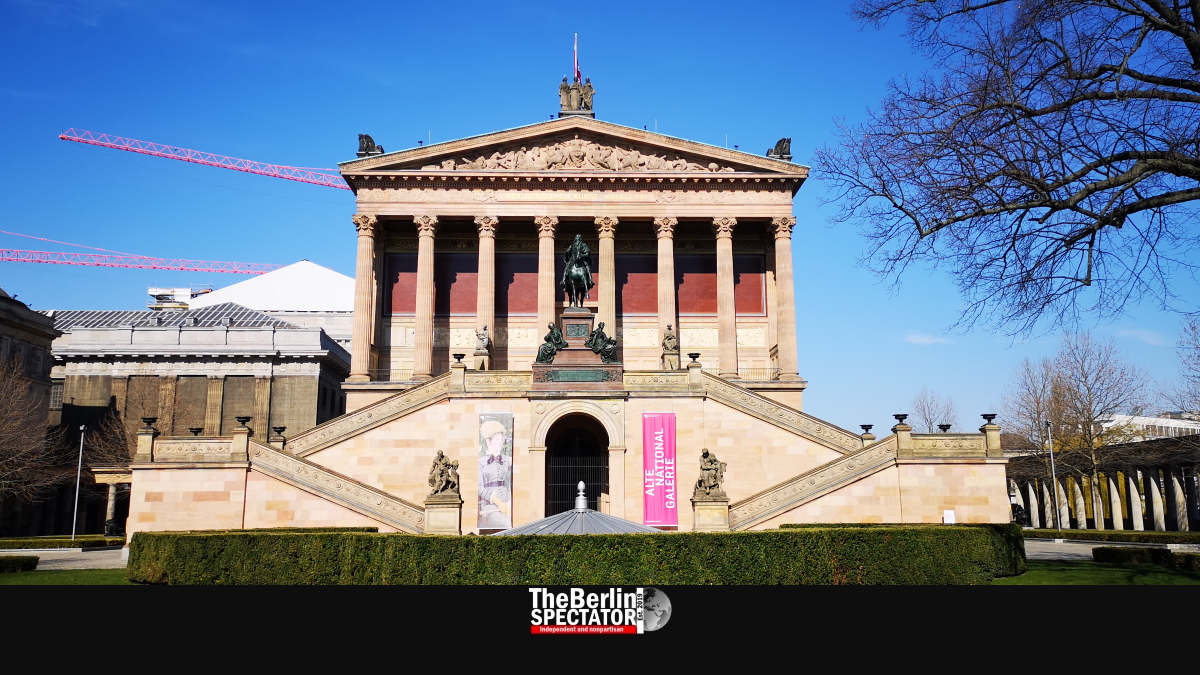 In Berlin, most areas were emptier than ever before on day no. 2 of the ‘contact ban’. Our reporter clashed with a police officer at Neptune Fountain.

Berlin may not have been this quiet since the invention of the combustion engine, in most parts. Because the German capital’s residents are more or less confined to their homes and there is very little traffic for that reason, the quietude was almost unbelievable. This is supposed to be Berlin? Well, yeah, at least in a way.

In Kreuzberg, at Maybach Ufer, veggie and fruit vendors set up their stalls at the weekly market, but there was hardly anyone they could have sold their goods to. The spring onions looked nice though. A few steps away, a Kottbusser Tor, there was some traffic. The Berliners racing back and forth in their cars may have been on their way to work.

When 2 + 2 still equaled 4 and the world was still standing, crowds would besiege the famous and ugly World Clock at Alexanderplatz 24/7. Japanese tourists with selfie sticks, Mexicans, Latvians, Russians, ‘Gringos’ and everyone else just needed to be there. Not today. But the clock was ticking. Time did not stand still.

On the other side of Alexanderplatz train station, Berlin almost felt like it used to, because pretty bad construction noise suddenly ended the quietude. Construction workers who seemed to keep their distance from each other were very busy indeed.

At Neptune Fountain, our reporter got off his bicycle, took a short break and some photographs. It did not take long until a small police bus with five to six officers arrived. One of them told him he was not allowed to stay at that location even though he was alone.

When the author’s press card did not help either, he told the police man his statement would be the highlight of his article. The Berlin Spectator is officially disputing its reporter did anything wrong by taking photos of Neptune Fountain during a bicycle ride he took on his own.

In normal times, Museum Island almost sinks because of the countless tourists who enter it every day. Today, it looked more like an Alfred Hitchcock film set in Hollywood, the one for ‘Torn Curtain’, a brilliant flick that is partially set in East Berlin.

Around Friedrichstrasse, in Berlin’s eastern city center, there was hardly any traffic. No pedestrians did any window shopping, no overpriced boutiques sold any fashion. The center is definitely dead.

The area at and around Brandenburg Gate is usually overcrowded, especially in nice weather. Today, three photographers took turns shooting the sightseeing sensation. In all cases they used the opportunity to take pictures of it without people. At the Topography of Terror, absolutely nothing was going on.

Sunny Tuesday in the Park

Back in Kreuzberg, the usual drug dealers were in business at Hasenheide Park, but they were outnumbered by mothers, dads, their children, dogs and some other Berliners who took walks alone and in pairs.

Reinhardswald School at Gneisenaustrasse is probably the only school in the world with decommissioned trams on its yard. The students can enter them during breaks, but they won’t move. Like all other schools in Berlin and all of Germany, this one is closed until after the Easter vacation.

One of the busiest intersections in Kreuzberg, where Mehringdamm meets Gneisenaustrasse and Yorckstrasse, looked very different today as well. At those fast food stands that spot is famous for, only a few individuals ordered Currywurst, other kinds of sausages or vegetable kebab. They kept a distance of five to six feet to the other customers.

Those regular sausages they sell for 2 Euro (2.16 Dollars or 1.84 Pounds) at ‘Curry 36’ are not bad at all. They are being boiled, which is something no tiny Corona animal will survive. Well, let’s hope so.