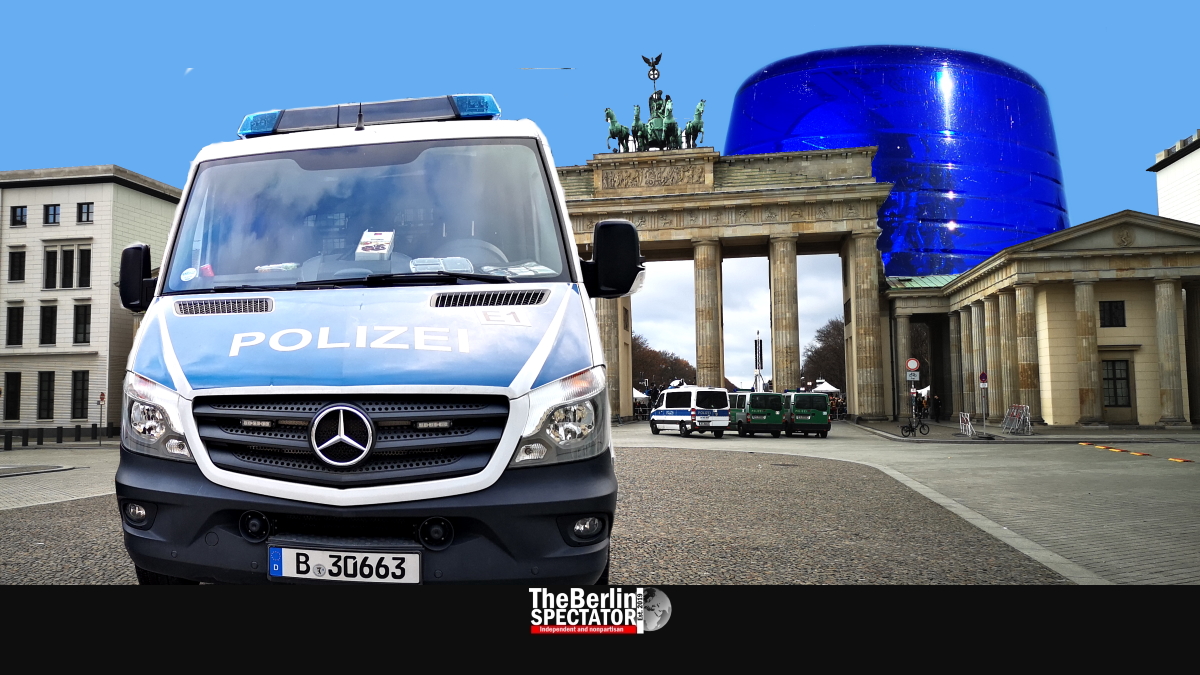 With 26,000 employees and trainees, Berlin’s Police Department is rather large. It is safe to say that they are very busy. These are the most relevant Berlin police news.

March 31st, 2020: Early on Tuesday morning, a 53-year-old woman was found in an apartment block in Berlin’s Marzahn district. Police managed to arrest a 33-year-old man who was named as the main suspect. Police and the prosecution are investigating.

March 29th, 2020: Up to ten individuals were part of a fight on Sunday night on the parking lot of a supermarket in Berlin’s Wedding district. Witnesses told police three cars had suddenly arrived. Ten men had gotten out of them and attacked a 45-year-old man. He was beaten and sprayed with irritant gas. Another man who had tried to defend the victim was attacked as well. The Berlin Police Department is now investigating this aggravated battery case.

March 29th: Three juveniles tried to rob a taxi driver in Gesundbrunnen on Friday. One of them, a 15-year-old juvenile, asked him whether he could change a big Euro bill. While the driver opened his wallet, the teenager tried to steal it. During their struggle, the taxi driver accelerated the car and crashed into a parked vehicle. Both the culprit and the cab driver were injured in the process.

March 30th, 2020: In Friedrichsfelde, police arrested a 24-year-old man who broke into a parked car last night. He is suspected of having broken into more vehicles in the same area.

March 29th, 2020: A 55-year-old man in Moabit was going to enter an elevator in an apartment block on Sunday. When two men approached him he asked them to let him use the elevator on his own because of the danger posed by the Coronavirus. The two men insulted him in a hostile, xenophobic way and hit him in the face. The state security office at the State Office of Criminal Investigations is on the case.

March 29th, 2020: Since March 14th, police have checked 1,868 objects. In 811 cases, they closed down businesses which were not allowed to open. The number of offenses against the contact ban and the other rules in place because of the Coronavirus decreased on Sunday, when 17 criminal charges and 52 offenses were filed.

March 29th, 2020: A man broke into a small fast food stand in Mitte on Sunday. The owner caught him in the act and forced him to stay until police arrived and arrested the culprit.

Barbara Slowik (54) became Berlin’s Police Chief in April of 2018. Before, she had worked at the Federal Ministry of the Interior, where she was engaged in the fight against terrorism. During her time there, she set up an anti-terrorism organization called GETZ. It combines the efforts of dozens of authorities in Germany in the fight against extremism from the right, the left, within foreign communities in Germany and espionage.

March 29th, 2020: Early on Sunday, police and fire fighters were called because of burning vehicles twice. In Wilhelmshavener Strasse, flames came out of a truck. The fire department made sure cars parked around the vehicle did not catch fire. In Schillingstrasse, an expensive Mercedes sedan was on fire. Whether the two cases are connected is unclear at this stage. Berlin has had an issue with arson on vehicles for a while now.

March 28th, 2020: In Wannsee, a 75-year-old bicyclist tried to get off the street when he noticed an approaching police vehicle. He fell and got injured badly. The fire department took him to a hospital.

March 28th, 2020: An 80-year-old lady was on the move on her bicycle in Argentinische Allee in Berlin’s posh Dahlem district on Saturday. At an intersection, she crashed into a vehicle driven by a 73-year-old man. With a broken leg, the woman had to be rushed to a hospital.

March 28th, 2020: The Fourth Homicide Division of the Berlin Police Department arrested a 32-year-old man on Friday. He is suspected of having murdered Homa Zaher, a lady aged 38, and her 9-year-old daughter Tajala. The prosecution believes the suspect’s motive was greed. He was presented to a judge and is in provisional detention.

Four in a Mini

March 27th, 2020: On Friday evening, police officers in civilian clothes tried to stop a Mini with four men inside. They tried to get away, crashed into a construction site sign and into two cars moments later. The four men ran into four different directions. Two of them were caught. They are now in a lot of legal trouble for different offenses, including one against the ‘contact ban’ imposed on the entire nation because of the spread of the Coronavirus.

March 28th, 2020: In Berlin’s Neukölln district, officers noticed a black Renault that took a red light, accelerated in an exaggerated way. Once the driver noticed he was being followed by police, he stopped, but accelerated again once the police men walked towards him. He was later arrested by other officers who came to their colleague’s aid. His car and a forbidden knife he was carrying were confiscated.

March 27th, 2020: In Berlin’s Hellersdorf district, a car was set on fire. The police are on the case.

Crash Under the Influence of Substances

March 28th, 2020: Early on Saturday morning, a young man crashed into a parked vehicle with a small motorbike in Buckow, a neighborhood in Berlin’s Neukölln district. Once police came to the scene, the 18-year-old was sitting on the curb, bleeding from his forehead. The officers performed first aid on him and sent him to a hospital. He told them he had consumed both alcohol and drugs. Also police noticed he did not have a driver’s license.

March 26th, 2020: On Thursday night, a resident saw three men who were walking down the external basement stairs of a supermarket in Dannenwalder Weg. He called the police who arrived within minutes. The officers managed to arrest two of the suspects and put them behind bars while the third one managed to flee. Tools used in break-ins were found in a bag one of them was carrying.

March 28th, 2020: Police in Berlin were busy observing the situation in regard to the ‘contact ban’ which is in place since Monday. They had officers in a helicopter monitor the parks, ended gatherings and two protests. At Kottbusser Tor, some radical left-wing rally participants were arrested. At Rosa Luxembourg Square another rally was ended by officers. Because of the spread of the Coronavirus, protests are banned, just like other gatherings. In 24 hours, 58 criminal charges and 108 offenses were filed on Saturday.

March 27th, 2020: A total of 650 police men and women checked the situation in Berlin’s parks and streets. They filed 53 criminal charges within 24 hours and registered 132 offense acts. An intoxicated 18-year-old man told officers he had COVID-19 and coughed into their faces. He was put behind bars temporarily. Legal proceedings were initiated.

March 26th, 2020: On Thursday night, police closed seven businesses that had opened illegally during the ‘contact ban’. Many legal proceedings were initiated.

March 25th, 2020: On Wednesday, the Berlin Police Department checked many businesses and gatherings outdoors. As many as 300 officers were involved. Between 6 a.m. and 6 p.m., 20 legal proceedings were initiated. Officers spoke to people in parks who were not adhering to the ‘contact ban’, nor were they keeping distance to others. On Wednesday night, 63 violations were noticed. In 19 cases, the suspects will have to expect legal proceedings.

March 25th, 2020: In Mettmann, a town in North Rhine-Westphalia, elite police officers from Berlin arrested a 19-year-old man on Wednesday. He is suspected of stabbing a 20-year-old in a Berlin city bus on February 8th, 2020. The victim had to go into surgery immediately. His life was saved. The suspect is facing an indictment for manslaughter.

March 25th, 2020: On Wednesday, officers in civilian clothes noticed a 45-year-old man who seemed to be passing on drugs to another individual. Later the suspect met a 54-year-old man. The two drove to a café in Sanderstrasse. Once they left, they were stopped, checked and arrested at Kottbusser Strasse. Police found drugs and cell phones in their car and 8 kilos (17.6 pounds) of marihuana at the café they had visited. The two men are now behind bars.

March 26th, 2020: In Berlin’s Schöneberg district, in Dudenstrasse, a man crashed his BMW into a street lamp post. When police officers came to the scene of the accident, they noticed they had seen the vehicle before when it raced by them at high speed a few minutes earlier. Then it turned out the driver was intoxicated, with an alcohol level of 1.6. The officers confiscated both his car and his driver’s license and initiated proceedings against him.

March 26th, 2020: On Thursday afternon, a bicyclist fell badly in Berlin’s Pankow district. The 73-year-old lady was riding on the bike lane in Neuendorfer Strasse. When she noticed a parking car that was illegally blocking that lane, she wanted to bypass it on the sidewalk. But when she hit the curb she fell and broke her leg. An ambulance took her to a hospital.

February 11th/March 27th, 2020: Police are looking for Samira Shamilova, a 13-year-old girls who disappeared from a children’s home on February 11th, 2020. Since, she has not contacted the protectory or her parents. The is 1.60 meters (5.2 feet) tall, has dark hair, dark eyes and speaks German and Russian. She often uses a lot of makeup and might seem older than she is.

March 23rd, 2020: On Friday, the Berlin Police Department reported a patrol car had caught two young drivers speeding on the BAB113 city freeway last Monday. One of them was racing down the road at a speed of 145 km/h (90 mph) in spite of the limit of 80 km/h (50 mph). This individual will lose his driver’s license for three months. The fine he needs to pay amounts to 1,360 Euro (1,507 Dollars or 1,241 Pounds Sterling). As it turned out, the speeder was a police apprentice. The other young man who was caught speeding kept on overtaking other cars on the right while he was having a conversation on his cell phone. He can also expect a hefty fine.

Note: This Berlin Police series was just established. That is why not the entire month of March is covered.