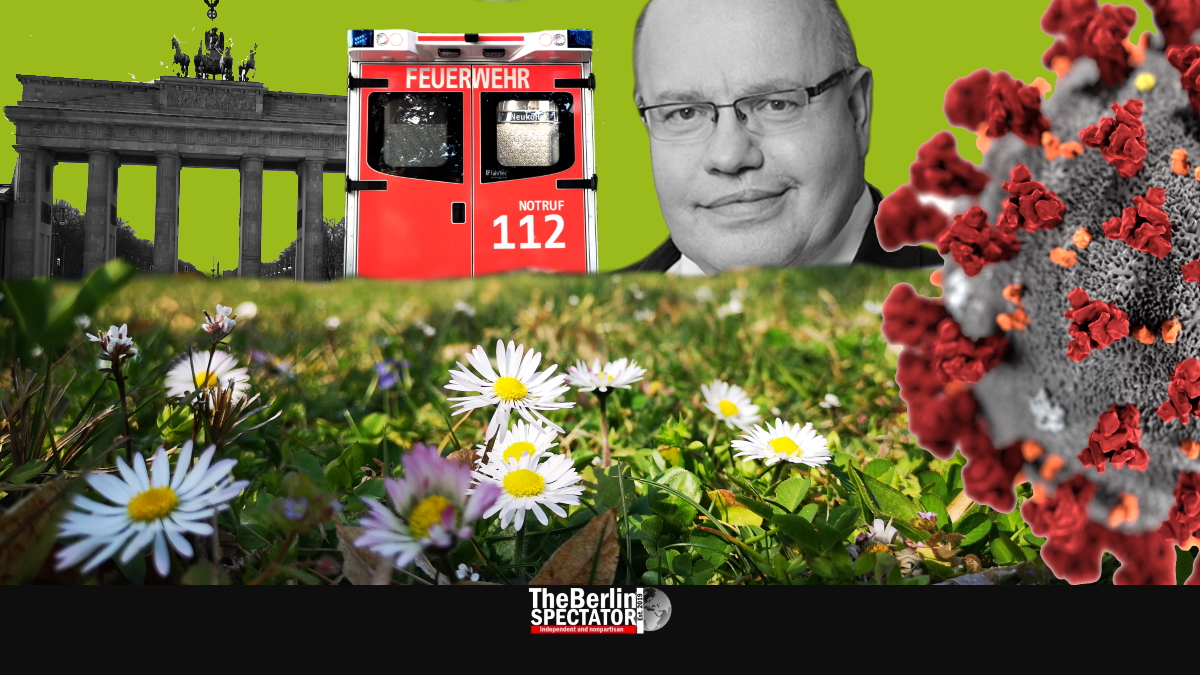 On a warm day in early spring, police monitored the situation in parks around Germany. Some people gathered in groups on Saturday and sat down on the grass, even though anything of the kind is forbidden these days. In Berlin, some even staged illegal protests.

Hundreds of police officers monitored places known to attract sunbathers on Saturday. At former Tempelhof Airport, they chased away people who sat down on the grass and talked to those who walked around in groups, reminding them of the ‘contact ban’ and the fines offenders have to pay.

At Görlitzer Park, which is both a haven for drug dealers and a place families from Berlin’s Kreuzberg district would gather at on sunny days, police officers in vans observed the situation at a strategic position on the biggest lawn the park offers. Since everyone saw them, nobody even tried to sit down at that spot, but many Berliners took walks here, in pairs.

At another park located at Berlin’s Gleisdreieck, too many Berliners sat down on benches and did not keep their mandatory distance. Police was on the case here too, mostly by talking to people and explaining to them why the ‘contact ban’ with its rules is necessary.

At Kottbusser Tor, a spot usually frequented by drug addicts, alcoholics, homeless people, but also shoppers and party people, up to 200 radical left-wingers staged a protest against the system, the ‘contact ban’ and pretty much everything. Since the rally was neither registered nor legal, according to the measures put in place because of the contact ban, police ended it. Several individuals were arrested.

Another illegal protest against “restrictions to basic rights” took place in Berlin’s Mitte district, until police made sure it ended. In normal times, up to 5,000 protests per year take place in Berlin. At this stage, they are only allowed ‘in exceptional cases’, whatever those might be, with up to 20 participants, if they keep their distance to each other.

Patients Picked Up from Bergamo

While some Germans enjoyed the sunny Saturday, others were hard at work trying to save lives. Germany’s air force, the Luftwaffe, sent its ‘MedEvac’ aircraft to the Italian city of Bergamo, where it picked up six Coronavirus patients who are in critical condition. They were flown to Cologne in order to be treated.

The federal state of North Rhine-Westphalia, which is badly affected by the Coronavirus itself, with more than 12,000 cases, had announced it would accept ten Italian and four French patients. Many other provinces and city states followed suit, including Berlin, Hamburg, Saarland and Saxony.

“In times of hardships, it is self-evident that we will led our support to our friends”, Germany’s Defense Minister Annegret Kramp-Karrenbauer said. “That is why we are picking up Italian patients in grave condition with our flying intensive care unit. This is an important sign of solidarity. Europe needs to stick together”, the minister stated.

The Luftwaffe’s ‘MedEvac’ is an old Airbus A310 that was transformed to a flying hospital. It has six intensive care beds two of which are equipped with breathing machines, and more beds for patients in stable condition.

In the meantime, a discussion about the approach taken by some large companies in Germany has led to a big discussion. Last week, the sports articles manufacturer Adidas, the shoe sales chain Deichmann and the consumer electronics retailer Media-Saturn announced they would stop paying rents for their stores all over Germany because they had to be forced to close.

Justice Minister Christine Lambrecht slammed them by saying the Corona aid laws did not offer any basis for this kind of approach. Tenants still needed to pay their rent. Earlier this month, new regulations had been implemented, according to which tenants in difficult situations caused by the Coronavirus cannot be evicted for not paying their rent. This applies to both businesses and individuals. But those giant companies that were criticized are not threatened by bankruptcies.

On Saturday, Lambrechts colleague Peter Altmaier, the country’s Commerce Minister (on photo at top of page) said board members and managers of companies which received help from the state should give up some of their income, including bonus payments. “It is important to me that board members and high-ranking employees contribute in emergency situations like this one”, Altmaier stated.

On Sunday in the early morning, the official number of persons infected with the Coronavirus in Germany was 57,695. North Rhine-Westphalia had more than 12,000 cases, Bavaria more than 11,000 and Baden-Württemberg more than 10,000. Hesse, Rhineland-Palatinate and Berlin reported more than 2,000 cases each, Hamburg had just under 2,000 infections.

The number of deaths related to the Corona virus pandemic in Germany stood at 433 on Sunday morning. Only four days ago, on Wednesday, there had been less than half this number of deaths.

Bundestag MPs are among the tens of thousands of infected. So was the Israeli Ambassador to Germany, Jeremy Issacharoff, who had contracted it during a meeting with an infected MP. He is now cured. Issacharoff announced he would reopen the embassy in Berlin tomorrow. Because 150 staffers were in quarantine, including Issacharoff’s deputy Aaron Sagi, it had been closed since March 18th.

In Hesse, the federal state’s Finance Minister Thomas Schäfer committed suicide on Saturday. His body was found near train tracks in Hocheim. Today, Hesse’s First Minister Volker Bouffier said nobody had been prepared for this.

“We are shocked, perplexed and very sad”, Bouffier said. “Our thoughts are with his wife and his children.” Schäfer had been a great politician for 20 years who had been widely respected in Hesse and beyond. Bouffier stated the worries about the Corona crisis and its implications had probably overwhelmed Minister Schäfer.