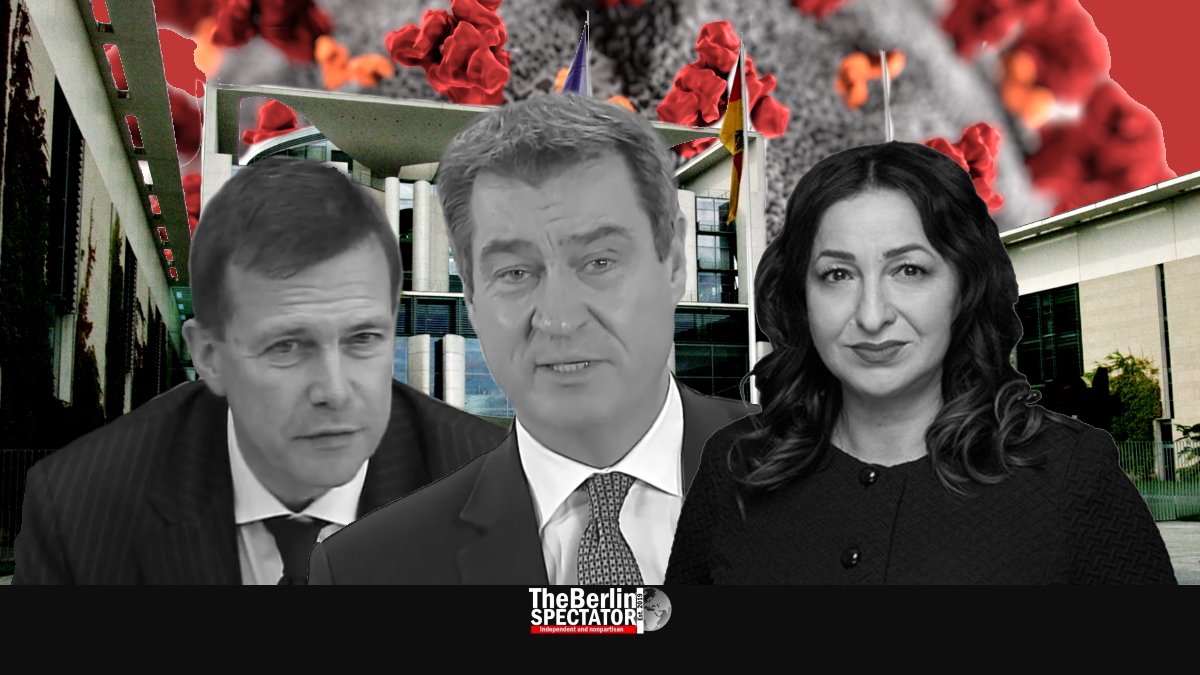 In Germany, a majority of citizens believes the ‘contact’ ban and other restrictions should remain in place until after Easter. More than half of all Germans even want stricter measures designed to curb the spread of the Coronavirus.

According to Germany’s federal government the time for easing restrictions, including the ‘contact ban’, has not come yet. “We need all of those measures, undiminished”, the government’s spokesman Steffen Seibert (photo above, on the left) said in Berlin. He stated Chancellor Angela Merkel would love to ease the bans. But she was convinced that it would be wrong to raise false hopes. Seibert stated there would be a time after the crisis.

Merkel, who is in quarantine herself, was tested negative for the Coronavirus for the third time on Monday. On Wednesday, she will have another phone conference with the First Ministers of Germany’s sixteen federal states. They would “take inventory”, Seibert announced. Evaluating the current situation is the only item on the agenda, for now.

In Bavaria, one of the provinces affected most, First Minister Markus Söder (photo above, center) announced the ‘contact ban’ would be prolonged until April 19th, 2020, which is when the Easter vacation ends. Söder said the measures put in place a week ago had started to show an effect. “The curve of infections is flattening to some extent”, Söder told the press. But the debate about lifting the measures was premature.

In Berlin, Governing Mayor Michael Müller had the same position. “It is too early to announce anything”, he told the ‘Berliner Zeitung’ daily. One day, the daily routines would be started up again, step by step. But there was no effective date on which everything would be the way it used to be. Even once the ‘contact ban’ had been lifted, there would be new rules, for instance at companies many people worked for, Müller said.

According to a nationwide poll conducted by Forsa for the German TV channels RTL and n-tv, more than half of all Germans, 55 percent, believe there should be even stricter measures, while 42 percent rejected anything of the kind. A huge majority, 88 percent, believes the current restrictions should remain in place for another three weeks.

The city state of Berlin is in the process of setting up a ‘Corona clinic’ on its fairground. The Berlin Spectator was told by a source the hospital was being established in hall no. 26. In a thousand beds, patients infected with the Coronavirus will be treated there in case or once or if the existing hospitals’ capacity is exhausted.

Berlin’s Health Senator Dilek Kalayci (on photo at top of page, on the right) was criticized for saying the ‘Corona clinic’ would be ready “in April or May”. The conservative opposition in Berlin said there needed to be a date for the opening. Eight hundred employees will be needed to run the make-shift clinic.

The situation at a home for the elderly in Wolfsburg is escalating. By now, 17 care recipients have died there after Coronavirus infections spread in the building. Lower Saxony’s Health Minister Carola Reimann said many of the victims had not even shown COVID-19 symptoms before they had passed away.

As many as 187 Bundeswehr soldiers are infected with the Coronavirus right now. Germany’s armed forces also have 767 suspected cases. Many soldiers are in quarantine. The Bundeswehr is helping in the ongoing crisis, for instance by accepting logistical tasks. Germany’s air force, the Luftwaffe, is transporting Italian and French Corona patients to Germany, where they are being treated at hospitals all over the country.

Luxembourg and Switzerland accepted French patients from the Alsace region as well. At this stage, 80 infected persons from France are being treated at clinics in Germany and the other two countries mentioned. It is unclear how many Italians are in German hospitals at this stage, but several federal states have accepted Italian patients suffering from COVID-19. Many of them were in critical condition when they were flown in.

In the city state of Berlin, the discussion about the restrictions outdoors in continuing. While some Senate members said they did not understand why picnics in parks were forbidden, Interior Senator Andreas Geisel stated many pairs would create big groups of people and it would be hard to control people taking picnics at parks. Geisel announced a list of penalties for offenses.

Germany: No Improvement on Day No. 63 of Coronavirus Crisis