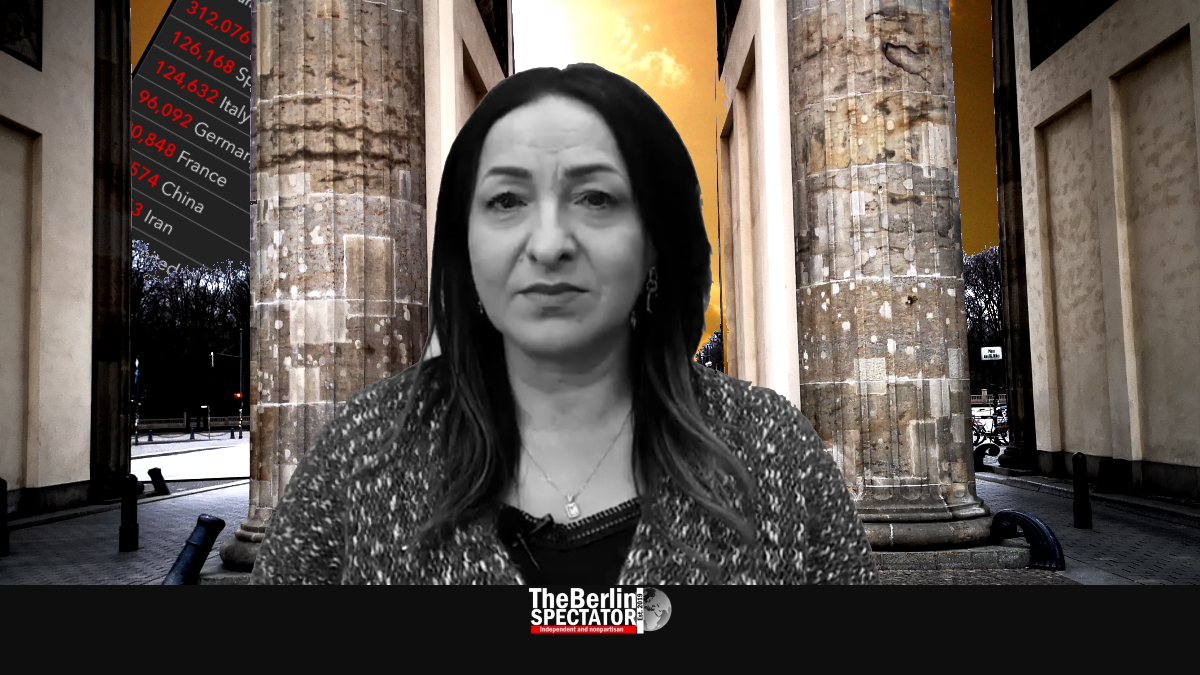 In Germany, almost 100,000 infected persons have been reported. Bavaria is the most affected federal state by now. All over the country, police observed the situation outdoors, as temperatures were rising.

In Berlin, Dilek Kalayci (on photo above) was the next politician to remind people of the ‘contact ban’ and the other rules as the German capital, and the entire country, expected the spring to hit. “Please stay at home”, the Health Senator of Turkish origin told Berliners. The crisis had not reached its peak yet, the danger of infection still existed.

Saturday in the Park

Senator Kalayci had good reasons to remind Berlin of what is going on. On Saturday, the Berlin Police Department was on the move, just like tens of thousands of residents who populated the city’s parks. Officers observed the situation there. Larger groups of people were told to keep their distance while the crew of a police helicopter looked at the situation from above.

In most cases, Berlin’s residents seemed to be adhering to the rules. At a bicycle store in the capital’s Charlottenburg district, people waited in line for more than an hour until they were allowed inside. While most kinds of shops have been closed for two weeks, book and bicycle stores have the permission to open, in Berlin only. But the number of customers who may enter them at a time is limited, for obvious reasons.

While regular Berliners purchased books and bikes, their Senate was busy waging a war of words over protective masks. Both Governing Mayor Michael Müller and Interior Senator Andreas Geisel had accused the Untied States of America of having “confiscated” 200,000 masks in Bangkok that had been purchased for the Berlin Police Department. Geisel even criticized “Wild West methods” had been used in what he called “modern day piracy”.

American officials denied anything of the kind had happened. Now the Foreign Ministry in Berlin is on the case. The German embassies in Bangkok and Washington D.C. are trying to establish what really happened. At this stage it looks like the masks were ordered through a German vendor who bought them in China.

Senator Dilek Kalayci asked the Bundeswehr, Germany’s armed forced, to transport protective masks from Asia to Berlin. In the meantime the ‘Spiegel’ weekly reported, Berlin had just received two million simple masks and 300,000 sets of protective clothing. The Bundeswehr had picked up the items at Leipzig/Halle Airport and taken them to the capital.

While dealing with masks, the Luftwaffe, Germany’s air force, brought in more Italian COVID-19 patients from Italy. On Friday, six people who were in critical condition were flown in, in order to be treated at hospitals in Rhineland-Palatinate.

In Bavaria, the authorities started closing parking lots and hiking trails in regions popular among tourists, including Oberstdorf. On Friday, Chancellor Angela Merkel had told the nation that trips or excursions could not take place this Easter.

On Saturday, Foreign Minister Heiko Maas was the next politician to tell the Germans to follow the rules during the Easter vacation. “A glance across the borders will show how deadly the Coronavirus is, in a much more dramatic way than over here”, Maas said.

“We have to continue to do everything we can to prevent an even faster spread of the virus in Germany”, he stated. “This also applies to the Easter holiday, even though this is difficult for many families and circles of friends.”

What the number of infected persons is concerned, Germany was approaching the 100,000 mark on Sunday. In the early morning, 96,092 cases were confirmed. Bavaria reported more than 23,000 Corona infections, North Rhine-Westphalia had more than 19,000, Baden-Württemberg’s number was above 18,000. Berlin had 3,626 cases this morning. 1,444 people have died of COVID-19 in Germany so far.