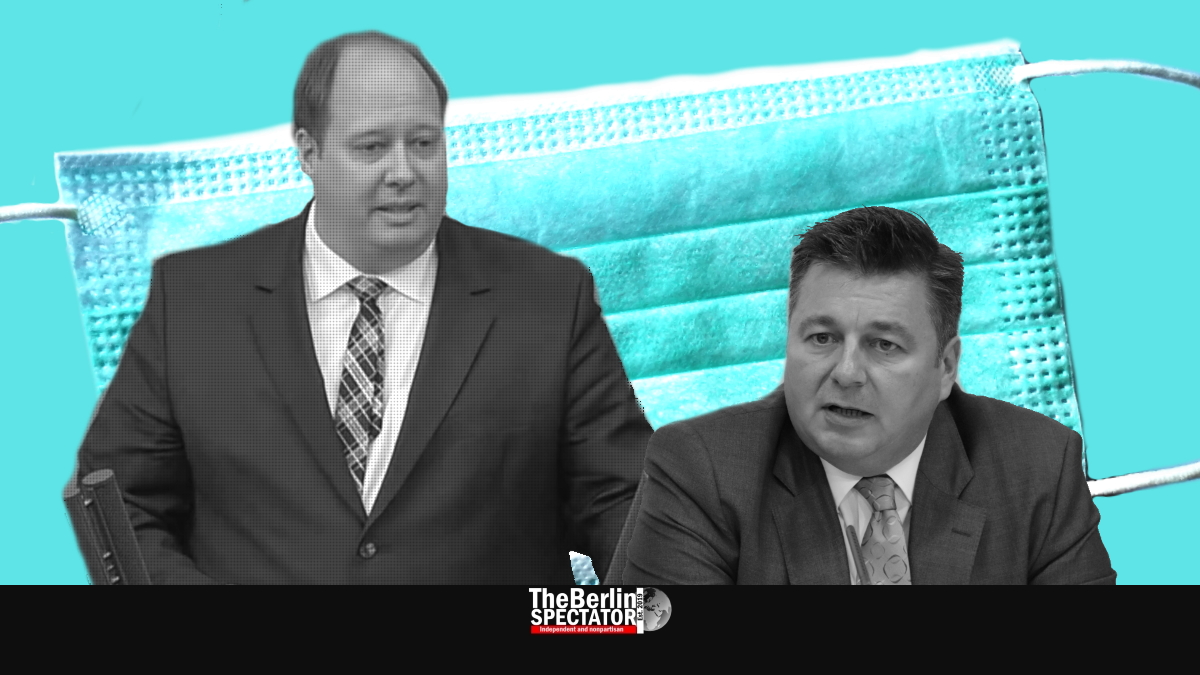 In Germany, where more than 100,000 individuals are now infected with the Coronavirus, the federal government is preparing for “the times with the highest number of infections”, according to Chancellery Minister Braun. Protective masks are an important subject too.

On Day number 14 since the ‘contact ban’ took effect in Germany, which is also day number 70 since the first Coronavirus case was confirmed in the country, the most difficult part is yet to come. Chancellery Minister Helge Braun (see photo above, on the left) told the ‘Allgemeinen Sonntagszeitung’ weekly it was the government’s task to prepare for it.

“The times with the highest number of infections are still ahead of us”, Braun said. Before the ‘contact ban’ had been put in place, the number of infected persons in Germany had doubled every three days, he explained. In order to make sure the German health system was not overburdened, the doubling time needed to be extended to twelve to fourteen days.

Braun stated priority number one was to prevent a situation from happening in which infected persons who needed medical help could not be treated because of exhausted capacities. The economy needed to stand back for now.

Today, the federal government intends to take decisions about protective clothing. In an interview with the ARD radio and television network, Finance Minister and Vice Chancellor Olaf Scholz said an increased production of protective masks within Germany needed to be discussed. Masks in huge numbers were needed now.

Scholz promised companies that switched their production to medical gear would be supported by the state, and they would get good prices for their products. Even an overproduction was fine at this stage because many countries wanted products of that kind.

Europe’s aircraft manufacturer Airbus just transported millions of protective masks from Asia to Europe. A company spokesman said they would be delivered to the health authorities in France, Great Britain, Germany and Spain. Especially in the past days, masks were the subject of many discussions.

The Foreign Ministry in Berlin is still trying to get to the bottom to what some German media sold as a scandal. On Friday, Berlin’s Governing Mayor Michael Müller and Interior Senator Andreas Geisel (photo at top of page, on the right) had accused the Trump administration of having “confiscated” 200,000 masks ordered for the Berlin Police Department.

Müller said the action had been “inhumane and unacceptable”, while Geisel accused the United States of “Wild West methods” and “an act of modern day piracy”. German-language media had reported the protective masks had been ordered at ‘3M’, an American manufacturer that makes them in China. But the company denied any such order existed.

As it turned out later, the order was placed through a German vendor who ordered the masks in Asia. At this stage it looks like the order, which had already been paid for, may have been rerouted to the U.S. after someone outbid the Germans. But the U.S. government has denied being behind it.

While the 200,000 the Berlin Police Department needs will be delivered at a later time, the collateral damage in the diplomacy department has not been repaired. In Germany, conservative media said Müller and Geisel had spread anti-Americanism, while the Berlin Senate stood by its accusations. The question who exactly outbid the Germans and who had the freight plane carrying them rerouted from Bangkok to the U.S. might be answered this week.

In the meantime, another big order to masks, a product of high demand in this global Coronavirus crisis, did make it to Berlin this past weekend. Two million masks and 300,000 sets of protective clothing from Asia arrived at Leipzig/Halle Airport from where they were picked up by the Bundeswehr, Germany’s armed forces, and taken to Berlin.

Bavaria has more than 24,000 Corona cases, North Rhine-Westphalia more than 20,000 and Baden-Württemberg stands at more than 19,000 Corona infections. Berlin officially had 3,687 cases this morning.

This past weekend, Berlin was a rather quiet city, in spite of the uninterrupted sunshine and warmth. Most residents did well and stuck to the rules. Police officers walked, rode and drove through parks and they observed the situation from above using a helicopter. (See our photo report entitled ‘Berlin in Early April of 2020: A Corona Weekend in Photos‘).