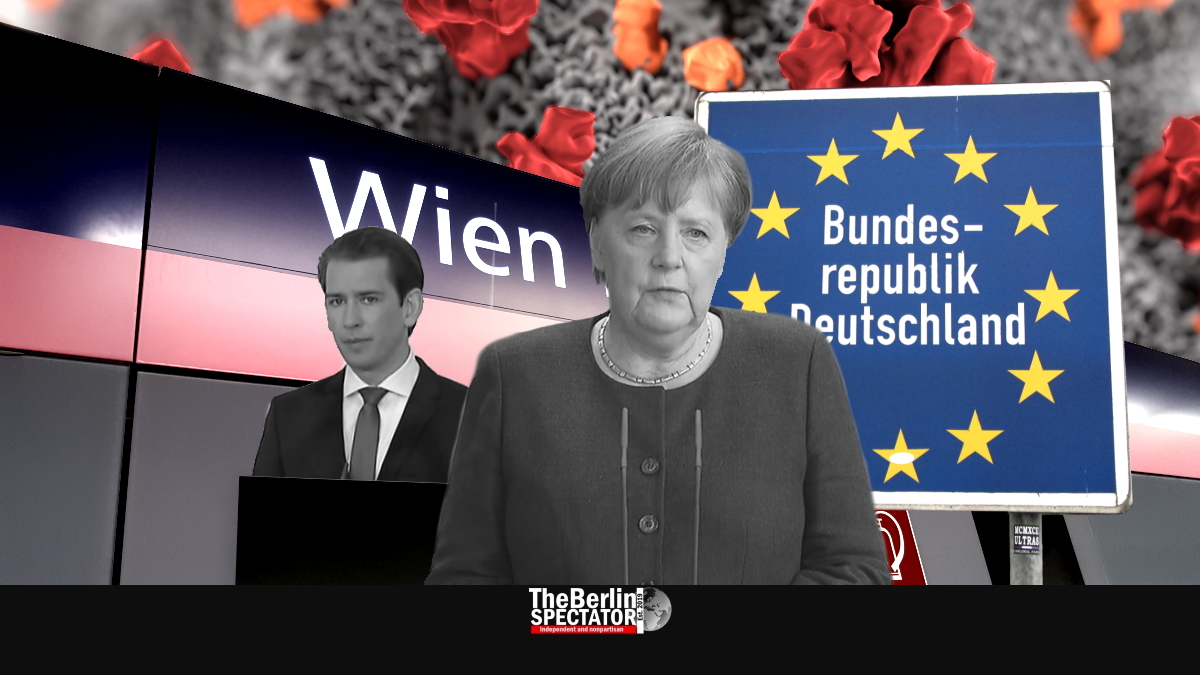 Two of Germany’s nine neighboring countries, Austria and Denmark, are about to lift some restrictions. But the German government is persistently sticking to the measures it took to slow down the spread of Corona.

In Germany, the ‘Bild’ tabloid has been supporting the government’s measures in the fight against the Coronavirus from the start. In its printed version and on its website, ‘Bild’ kept on explaining why the ‘contact ban’ and other measures were necessary.

But Austria is indeed pressing ahead. Some applaud Vienna’s decision to reopen smaller shops and all home improvement stores on April 14th, and all shops and malls in early May. Others see a dangerous gamble. “In Austria, we have reacted faster and in a more restrictive way”, Chancellor Kurz said in Vienna.

“Therefore we were able to prevent the worst from happening. Our fast and restrictive reaction now gives us the opportunity to get out of this crisis more quickly.” The Austrian Chancellor stressed the easing of the restrictions could only happen under one condition. “It will only be possible if we, all of us, follow the rules persistently.”

Denmark, Germany’s tiny northern neighbor, is trying to get out of the crisis mode it has been in for weeks as well, but it is taking a different approach, compared to Austria or Germany. Prime Minister Mette Frederiksen announced, nurseries, kindergartens and primary schools would reopen on April 15th.

Persistence and a Strong Europe

Germany’s Chancellor Angela Merkel, on the other hand, said it was too early to lift any restrictions. She would be a bad Chancellor if she considered any step of this kind too early. Merkel made clear lifting bans and being forced to backtrack later was not the right way. But she did reiterate her promise according to which the government is intensively thinking of ways to get out of the restrictions mode at the right moment.

Merkel called the Corona crisis a “symmetric shock” that affected everyone. And she called on Europe to stick together. It was in the interest of the Federal Republic of Germany that Europe came out of the crisis strong, Merkel said. “In the long haul, Germany will only be well if Europe is well.”

She also announced upcoming changes at Germany’s borders. So far, German citizens or people with residence permits who came in from certain countries needed to go into quarantine for two weeks. Because the entire world is a Corona risk zone now, everyone will have to do so in future, no matter what country he or she is coming in from.

Commuters, meaning people who live in France and work in Germany, or who live in Germany and work in neighboring Switzerland, are exempt. Mrs. Merkel’s federal government and Germany’s sixteen federal states intend to implement those changes after discussing them later this week. They are supposed to take effect on April 10th, 2020.

Germany is still showing European solidarity, for instance by treating COVID-19 patients from Italy, France and the Netherlands. In North Rhine-Westphalia, Health Minister Karl-Josef Laumann said 37 Dutch patients had already been accepted by hospitals in his federal state, but there was room for more. A total of 107 patients from the Netherlands would be accepted.

With almost 21,000 infected people, North Rhine-Westphalia is one of the federal states most affected by the virus. The total number of patients from other European countries who have been accepted by German hospitals up to this moment in 198.

By Tuesday morning, more than 103,000 Corona cases were confirmed in Germany. Bavaria had more than 25,000 of those, Baden-Württemberg just over 20,000, Lower Saxony more than 6,000, Hesse reported about 4,600 infected persons, Rhineland-Palatinate around 3,900 and Berlin exactly 3,862 cases. So far, 1,810 people in Germany have died from the disease caused by the Coronavirus. At least 36,000 individuals were cured after being infected.

Top 10: You Know You Are Experiencing the Corona Crisis in Germany when ….