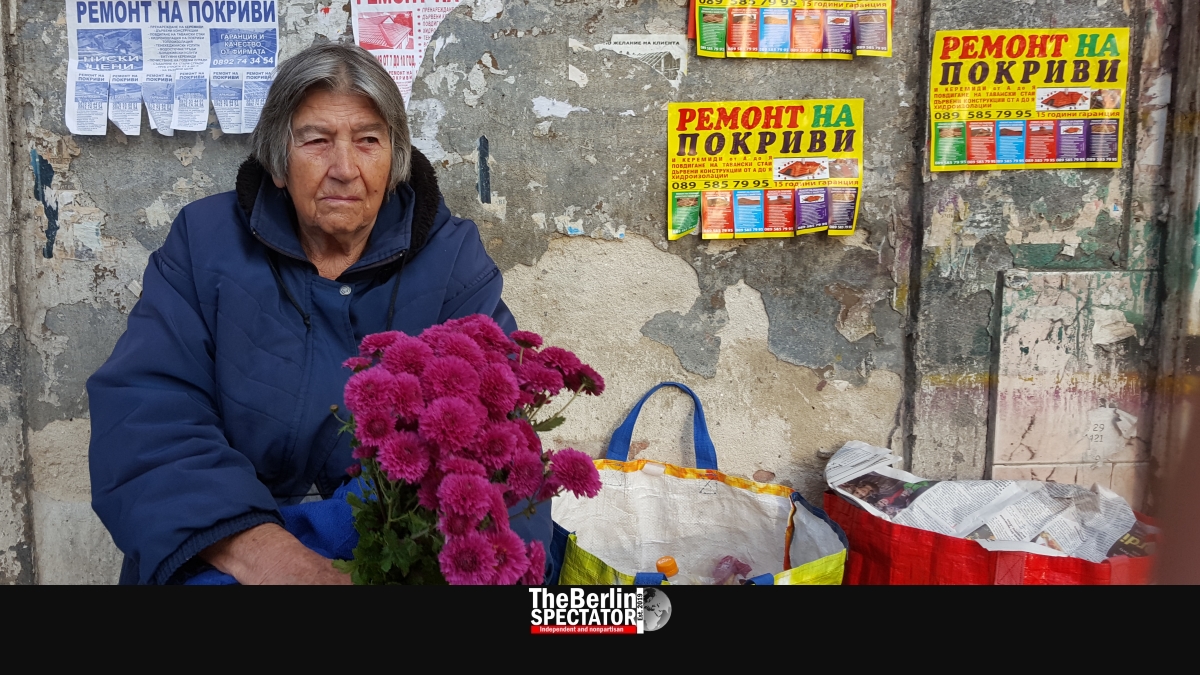 Bulgaria is a small Balkan country in the very south-east of Europe. While it offers beautiful landscapes and tourism magnets, it fails many of its own citizens.

When you get to Bulgaria you can greet the mean looking officer at the passport control counter, but he will not greet you back. And you better know where you are going from the airport, and how to get to your destination, or you will be ripped off within minutes.

But those two little problems, unfriendly officials and mafia taxis, protected by the authorities, are nothing compared to what Bulgarian pensioners have to go through. Until recently, they were forced to survive on 90 Euro per month (101 Dollars or 80 Pounds Sterling).

But hold on to your hats: In July, the pensions were increased by a full 20 Euro (22 Dollars or 18 Pounds). Of course pensioners will still not be able to cover their heating bills, or anything, after working hard for half a century. Welcome to Bulgaria. Welcome to the European Union.

Bulgaria is a country of 7 million inhabitants with a difficult history. For 500 years, the country was under Ottoman rule. Then it was forced to team up with the Nazis, before the communists took over. In a system which could be described as ‘mafia capitalism’, mafiosi basically ruled Bulgaria afterwards. Some say not much has changed in this regard either.

Yes, Bulgaria is a democracy, but one which mainly makes the few rich get richer. It does not stop the one individual who controls the media and several other business areas while being an MP at the same time. It does not seem to want to end corruption. It does not even implement the conditions for the country’s E.U. accession, which took place thirteen years ago.

Bulgaria does not fight poverty effectively or at all. Only relatively few citizens benefit from the tourism boom. The same applies to Bulgaria’s exports, which include chemical products, rose oil, yogurt, garments and shoes.

Before joining the E.U., this country behind the seven mountains was the region’s biggest energy exporter, but Brussels insisted on a shutdown of four out of six nuclear reactors, located near the town of Kozloduy at the Danube riverbank, because they were too dangerous. No, the E.U. did not want a Chernobyl on its turf.

In Sofia, the capital of Bulgaria, the conservative Boyko Borissov is leading a government coalition with the ‘United Patriots’ who are mainly known for xenophobia, racism and homophobia. Borissov himself used to be a bodyguard for communist dictators and a firefighter.

After the fall of communism he sold himself as a hot shot, the strong man who can resolve all problems. The people believed him and made him Mayor of Sofia. He founded GERB, his own party, and projected his strong man image on the entire country.

In Brussels, the E.U. is glad to have someone they can rely on when it comes to talking about a strong Europe. At the same time they know what is going on in Bulgaria. The justice system still needs the kind of reform the E.U. wanted a decade ago. Corruption is still ruling. The two main minorities are being discriminated.

During the peak of the refugee crisis, asylum seekers tried to avoid Bulgaria. Many were beaten by self-proclaimed ‘refugee hunters’, robbed and abused by police officers and put into terrible refugee camps.

Legal refugees who managed to get out of the camps were still abused. They were confronted with racism and denied documents they had the right to get. Some were exploited as modern day ‘semi slaves’ on the job market. Unaccompanied minors among the refugees were locked up, even though doing so is illegal.

Oh yes, there are positive aspects about Bulgaria too. For instance, the country is a tourist haven. It was before Corona struck. Every year, up to 9 million vacationers from abroad hit Bulgarian turf. They go skiing in Bansko and other resorts, they climb truly beautiful mountain ranges including Vitosha, Balkan, Sredna Gora, Pirin, Rila, Strandzha and the Rhodopes.

And they populate Black Sea beaches a lot, even though those waters are in a pretty bad state. Experts believe the Black Sea’s ecosystem will collapse soon, which is not only Bulgaria’s fault. In most of the six Black Sea states Bulgaria, Romania, Ukraine, Russia, Georgia (the last three were part of the Soviet Union) and Turkey, factories built right on the shores started polluting the water in the 1950s.

At the same time, Bulgaria is not exactly contributing to a resolution of the problem. Some purification plants at the Black Sea, which were supposed to be built, have not been constructed yet, for whatever reason. At some resorts, hotels let their sewage flow right into the sea. Do not ask the author of these lines what he swam into several times at beaches in Sozopol and Kiten, two popular resorts.

Still, there are nice places at the Bulgarian Black Sea coast with cleaner water. Those include Sinemorets in the very south and the region around Kavarna in the north.

Bulgaria’s mountain ranges offer beauty all around. Many Bulgarians spend their weekends climbing them. A growing number of international tourists do so as well. There is nothing better than standing on a Bulgarian mountain top with a good camera, after bypassing ticks, snakes and bears on the way up.

City tourists who explore Plovdiv or Sofia will find some interesting sights and inexpensive food. The Bulgarian cuisine is comparable to the Greek one. While Bulgarian salads are usually excellent, the Greek versions of Moussaka and other dishes are more tasty.

One million Bulgarians live abroad, in the United States, Canada, Australia, Austria, Germany, the United Kingdom, France, Spain and elsewhere. In many cases the decision to study and work abroad is being taken early on.

Many secondary schools in Bulgaria’s cities offer intensive foreign language classes. That way, young Bulgarians prepare for studying in Vienna, working in Zurich or starting a career in Frankfurt. As nurses, they can earn 800 Leva (400 Euro, 450 Dollars or 357 Pounds) in Bulgaria, if they are lucky, or 3,000 Euro (3,283 Dollars or 2,633 Pounds) in Western Europe.

Many Bulgarian doctors, musicians, scientists and others left the country the moment they could. The problem they caused by doing so is known as brain drain, an issue other Eastern European countries are facing as well.

While young Bulgarians are going, expatriates are coming in. A large community of British nationals live in Bulgarian villages all over the place, where they grow tomatoes, ride horses, milk cows and socialize with each other as well as with the natives. Some German pensioners can be found too. While their pensions are not satisfactory back home, they do last all month in Bulgaria, where living expenses are lower.

Because the state does not give them anything but discrimination, many Bulgarian Roma go to Western Europe, where they mostly live in poverty as well. But to them, anything is better than the appalling situation they are forced into in their home country, where the authorities would even destroy their homes.

Bulgaria is a country full of problems. Poverty, corruption, racism and discrimination are some of them. The medical system is bad as well. So are the street and road networks and the education system. The latter urgently needs young and motivated teachers with proper salaries and know-how.

There is a middle class in Sofia, where HP, Microsoft and other tech firms employ thousands of IT specialists and call center agents. But the other Bulgarian cities hardly provide jobs, and those they offer do not come with appropriate pay. Hardly anything improves for the poor, while the few very rich get richer.

The arts are another area which does impress. Even during communist times, the Bulgarian music world produced great artists who composed and performed the most wonderful sounds ever. The late classical composer Pancho Vladigerov, the choir ‘Le Mystère des Voix Bulgares’ and the late pianist and composer Milcho Leviev are three examples of many. Leviev recently died in Greece. He was very critical of his birth country himself.

Bulgaria is ambivalent. The country offers a lot, including beautiful landscapes, art and culture. At the same time its long list of problems does not really make it a good country to live in for many of its own citizens. Those who are not being discriminated or exploited will still come in contact with the terrible education and health systems, unless they have the money for private schools and treatment abroad.

In the Corona crisis, Bulgaria took measures early, when the number of infected persons there had one digit. In the morning of April 10th, 2020, the country had 618 Corona cases. Restrictions on movement applied.