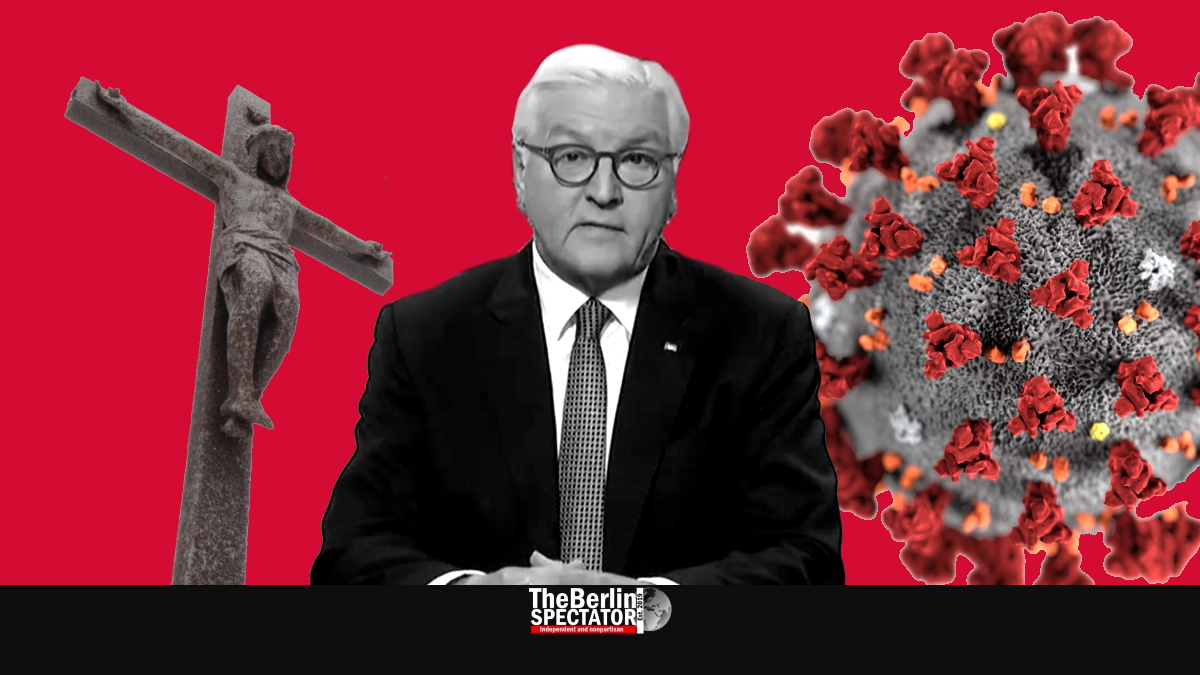 In a speech to the nation, Germany’s President Frank-Walter Steinmeier said the Corona crisis would change the world. “What will it look like? That is up to us”, he said.

A few hours ahead of Easter, one of the two most important holidays for Christians, President Steinmeier addressed the Germans. “Outside, nature is in bloom. We yearn to go outdoors and spend time with each other, to see those we hold dear – friends and family”, Steinmeier said. “That’s what we used to do. That’s how it always was. But this year, everything is different.”

‘No Sunny Start to the Season’

“It hurts having to do without visiting our parents”, Steinmeier stated. “It breaks grandparents’ hearts that they cannot at least hug their grandchildren. And many other things are different this year, as well. There are no colorful crowds mingling in parks and street cafes. Many of you have had to give up your long-awaited holiday.”

Steinmeier said, there was no sunny start to the season for restaurant and hotel owners. Believers could not join in prayer. “And all of us are asking ourselves the nagging question: What will tomorrow bring? Of all times, at Easter – during the festival of the resurrection, when Christians around the world celebrate life’s victory over death – we must restrict our activities, so that disease and death do not claim victory over life.”

‘We Mourn Those Who Die Alone’

Many thousands had died, Steinmeier stated. “Right here in our country, as well as in Bergamo, Alsace, Madrid and New York and many other places in the world. The images are deeply moving. We mourn those who die alone. We think of their loved ones, who cannot even gather and say goodbye.”

President Frank-Walter Steinmeier thanked “the tireless health care workers whose job it is to save lives. And, even though all our worlds have been upended, we think of those who are particularly hard hit by the crisis, those who are sick or lonely, and those who are worried about losing their job, or their company.” He mentioned freelancers and artists, families and “single parents who live in small apartments without a garden or a balcony.”

“This pandemic is showing us that we are indeed vulnerable”, Steinmeier continued. “Maybe for too long we thought ourselves to be invincible, that the future would take us faster, farther and higher. That was a delusion.” But the President made clear this was not the only thing this crisis was revealing. “It is also showing us how strong we are and what we can build on.”

President Steinmeier also praised Germany’s crisis managers in the federal government and the country’s federal states: “It is a good thing that the state is now taking vigorous action, in a crisis that has taken us into uncharted territory. I ask you all for your continued trust because those in government at the federal and federal state level are aware of their tremendous responsibility.”

“But what exactly lies ahead, or when and how restrictions can be eased – these things are not up to politicians and experts alone”, Steinmeier told the nation. “Rather, this will be determined by us all, by our patience and our discipline – especially now, when this is most challenging for us. The great feat that we are accomplishing these days is succeeding not because we are being forced by an iron hand, but because we are a thriving democracy, with responsible citizens.”

What Exactly Is Normality?

He said Germany was “a democracy in which we trust one another to listen to facts and arguments, to be wise and do the right thing. A democracy in which every life counts, and in which everyone is making a difference, as a nurse or the Federal Chancellor, as a committee of scientists or a visible or invisible pillar of our society, sitting at a supermarket cash register, or at the wheel of a bus or a truck, working in a bakery, on a farm, or in rubbish collection.”

Frank-Walter Steinmeier said many Germans were going above and beyond. “Of course, I know that we all yearn to return to normality. But what exactly does that mean? Getting back as soon as possible to our old routine and habits? No, the world that lies ahead will be different. What will it look like? That is up to us.”

‘Let Us Lear From Everything’

“Let us learn from everything – the good and the bad – that all of us are experiencing day by day in this crisis”, Steinmeier suggested in his speech. “I believe we are at a fork in the road. Already now, in this crisis, it is clear that we have two options: Will it be every man and woman for him- and herself, with us elbowing our way through life, gathering what we can and making sure our own needs are met? Or will we keep up our newly found dedication to each other and to society?”

“Will we maintain the creativity and willingness to help that has burst onto the scene?”, the President asked. “Will we stay in touch with the elderly neighbor whom we helped with his shopping? Will we continue giving the cashier and the postman the appreciation they deserve?”

Once the crisis was over, the nation would remember “how much we should value the essential work that is being done by caregivers, those who supply our needs in daily life, and those working in social professions, nurseries and schools? Will the ones who survive this crisis economically intact help those who have been hardest hit?”

“Will we join up around the world to search for a solution, or will we fall back into isolation and everyone going it alone?”, the President asked, just before coming up with the answer: “Let us share all knowledge and research, so that we can find a vaccine and therapies more quickly. And let us form a global alliance that works to ensure that the poorest and most vulnerable countries also get access.”

‘Corona Crisis is Not a War’

Steinmeier said the Coronavirus pandemic was not a war. “It does not pit nations against nations, or soldiers against soldiers. Rather, it is a test of our humanity. It brings out the worst and the best in people. Let us show each other our best side. And let us do so in Europe, as well. Germany cannot emerge from the crisis strong and healthy if our neighbors do not also become strong and healthy. Thirty years after the reunification of Germany, and 75 years after the end of the war, we Germans are not only called on, but are actually obligated to show European solidarity.”

“Solidarity, I know, is a lofty concept”, he said. “But is not each and every one of us now experiencing, in a very personal and existential way, what solidarity means? My actions are essential for the survival of others. Let us hang on to that precious realization. The solidarity that you are currently showing every day is what we will need even more of in the future.”

‘Many Things Will Not Get Easier’

“After this crisis, we will be different as a society”, Steinmeier said, concluding his speech. “We do not want society to become anxious or distrustful. Instead, we can be a more trusting, considerate and confident society. Am I expressing too much hope, even considering it is Easter? This is something over which the virus holds no sway. It is solely up to us.”

“Many things will certainly not get easier in the weeks and months to come. Yet we Germans are not really known for taking the easy way out. We demand much of ourselves, and we have great faith in one another. We can and we will grow, also through this experience.”

Steinmeier wished all Christians a happy Easter. His speech was historic. German Presidents do not usually address the nation the way he has three times now. Just this past week, he and his partner Elke Büdenbender had published a video message to the Germans.

While celebrating Easter and Passover, Germany is waiting for decisions the government and federal states are supposed to take this coming week. Angela Merkel and the First Ministers from all sixteen provinces and city states are scheduled to discuss the latest developments and the right steps to take at this point, regarding the ‘contact ban’, other restrictions and the question whether wearing protective masks should be mandatory. A majority in Germany would support a measure of this kind, according to a poll mentioned in German-language media.

On Sunday morning, 125,452 Coronavirus cases were confirmed in Germany. So far, 2,871 people have died as a result of Coronavirus infections. At least 58,000 former individuals in Germany who used to be infected are cured by now.

During the first days of the Easter vacation, a huge majority of Germans and other residents all over seemed to adhere to the Corona rules by keeping their distance and not gathering in groups. Because of warm weather, countless families, couples and individuals used to opportunity for long walks. They sat down on lawns and benches in parks and rode bicycles.

Attack on Police in Frankfurt

In Frankfurt am Main, police officers who were monitoring the situation were attacked on Saturday. First, police men were attacked by individuals who threw a large stone at their vehicle. The attackers ran away and could not be stopped. Shortly after, another police vehicle was attacked by 20 people six of whom were found in an apartment. They owned several illegal weapons.

A few hundred kilometers further north-east, in Berlin, police ended a protest staged by left-wing extremists who complained about the fact that the right of assembly was restricted due to the Coronavirus crisis. They said the ‘contact ban’ was an attack on civil rights. According to the organizers, some participants were arrested.

The police said legal proceedings had been initiated against a number of people. The identities of 80 individuals had been checked. Up to 400 protesters and 180 police officers were on site. In Berlin’s Wedding district, another protest with 80 participants was stopped.

In the meantime, more and more COVID-19 patients from other E.U. countries are being treated at hospitals in Germany. The ‘Welt am Sonntag’ weekly reports, almost all federal states in Germany had accepted patients from abroad.

Clinics in Baden-Württemberg are treating 28 French and two Italian patients, while there are 23 French patients in Saarland. Ten Italian, eight French and 39 Dutch individuals siuffering from COVID-19 are being treated in North Rhine-Westphalia.